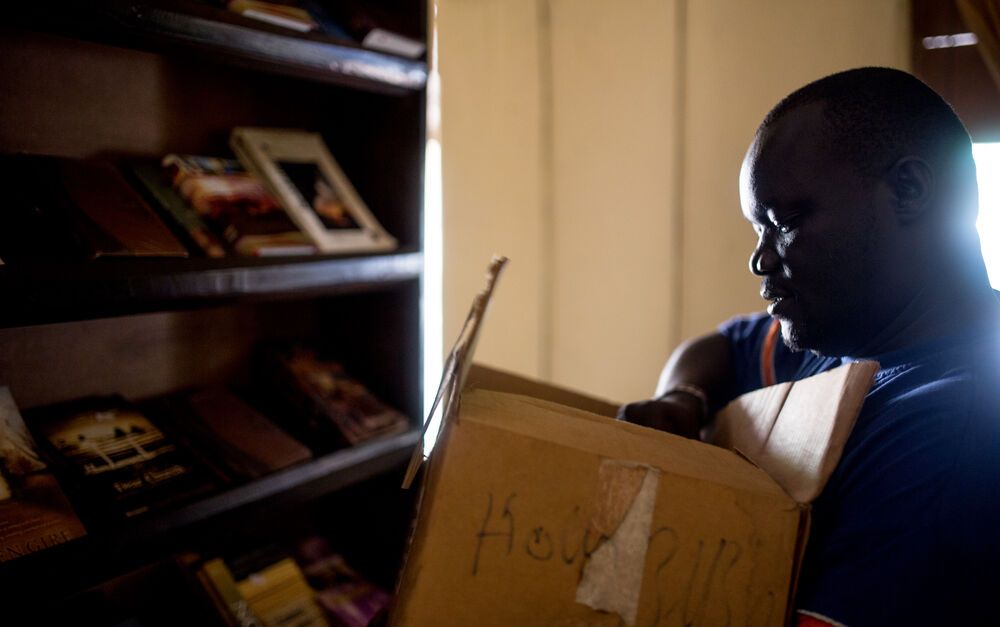 South Sudan: OM?s team in South Sudan is ministering through the Christian bookshop. Photo by Justin Lovett
The bookshop is older than the country.

Since its conception in 1975, Apaya Bookshop has continually provided hope throughout South Sudan, the new country that gained its independence in 2011, inspiring change at both the personal and political level.

Tony, Jafar and Moses, three members of OM South Sudan’s team, run the shop—a small room displaying books on simple shelving units. More commonly, volunteers host sales tables at various exhibitions, often in front of churches, and sometimes outside mosques. English, the bookshop’s business manager and acting leader of OM South Sudan, said the bookshop is important for two reasons: one, so that every person will have the ability to read the Word of God, and, two, that when people read the Word of God, they will understand it.

Along with the recent geographical reorganisation of South Sudan—from 10 to 28 states in October 2015—OM’s ministry there has also enlarged over the past year. In November 2015, OM shipped 65 boxes of new books, weighing approximately 1,060 kilograms, to the team in Juba.

The shipment included English and Arabic titles, among them copies of Genesis, Luke and John, as well as multiple translations of the Bible, and books on various aspects of Christian growth.

Long-term worker Jim*, who worked closely with previous members of the team and has visited South Sudan several times, explained, “The thing that is very special about South Sudan is they like study books of all types. They like study Bibles and books that help them understand the Bible. They go for these educational books to try to find answers.”

While the books will bolster inventory for the Juba shop and the traveling tables, the OM team in South Sudan also plans to donate some of the books they received from the shipment into other areas in the country, according to English.

“I’m praying that through this [donation of books], God will bless South Sudan. We are a new nation, and this nation should be founded on faith and the power of God,” English shared.

Among returning customers to the bookshop are pastors, who pick up books to distribute to their churches. The team also delivers books to different schools. For a country short on literature, the bookshop provides a much-needed source, noted long-termer Lydia*, Jim’s wife: “Many people are coming [to Apaya] for educational purposes; there’s a dearth of books.”

From English’s perspective, perhaps the most exciting demographic of book connoisseurs is the city’s youth. “When we receive books, lots of youth come to the bookshop because they are excited about the books... [It] is good that God is doing this among this generation,” he said. “There were many getting drunk or taking drugs. But God is working among them and making a new generation.”

Along with sending literature out, Apaya Bookshop also resources people with needs who come into the shop, English explained. For example, students. “Students come and they haven’t had any breakfast. [If they] don’t have any money, we do their photocopying for free,” English said.

Other people have more specific needs.

One morning, English and Tony were sitting in the bookshop when a mother came in, carrying her sick baby girl. “I’ve come for one reason,” she announced. “I want you to pray for this baby. I don’t have any money to take the baby to the hospital.”

Tony took the baby in his arms, prayed for her, and then turned to English: “Let’s give the mother 50 South Sudanese pounds so that they can go to the clinic,” he suggested.

Six days later, the mother returned to the shop with her daughter—the baby was healed. The mother got down on her knees in front of the two men, but English urged her to stand up. “I’ve come to thank you,” she said. The day she came into the shop, she had been walking among crowds of people all day, but no one else had helped her.

For Tony, English and other members of the bookshop staff, acts of tangible love and generosity—like their concern for the mother and her baby and their subsequent donation—are not a one-time occurrence. “They do a lot [for the community],” Jim explained. Lydia continued, “They’re a place where they give help.”

Another day, as English was tending the shop, South Sudan’s Minister of Transportation entered, surrounded by armed bodyguards. English welcomed her, waiting while she browsed.

“Is this a bookshop, or have you turned it into a restaurant?” she inquired, having noticed the staff had allowed a poor woman to set up a tea stall in front of the bookshop.

“This is a bookshop,” he replied.

“Thank you,” she said. “Because this bookshop is a blessing to the people of South Sudan.”

English gave her a Bible and some books from the shop. Two days later, she returned. “I am so happy,” she told him.

When English asked why, she said, “Because the books I took from you really changed my life… In the government, we don’t say the truth. Sometimes things are not going straight. And then, through the books, I know that I’m doing wrong.”

Before leaving, the Minister promised to come to all the exhibitions where Apaya hosted tables and buy books. One day, at a book table set up in a church, she met English again. “Thank you,” she repeated. “Everywhere I go, I see you. That means that there will be change in South Sudan through these books.”

Praise God for Apaya Bookshop’s ministry in South Sudan! Pray that the recent donation of books will touch lives and impact communities. Pray that the bookshop, as well as members of the OM South Sudan team, will receive necessary financial support to continue serving communities there.

On October 21, 2015, Rev. Iskander Loura Ali, leader of OM South Sudan, passed away after undergoing several months of treatment for cancer. His death was the second major challenge for the OM South Sudan team, who lost their previous leader, Joseph Taban, two and a half years prior. Although the team continues to grieve the loss of two great leaders, they are still moving forward in the work God is doing in South Sudan. Now is the time for change. Please consider helping transform this new nation by donating to OM’s ministry in South Sudan.

Published: Tuesday, 20 December 2016
Credit: Nicole James
© 2016 OM International This email address is being protected from spambots. You need JavaScript enabled to view it.