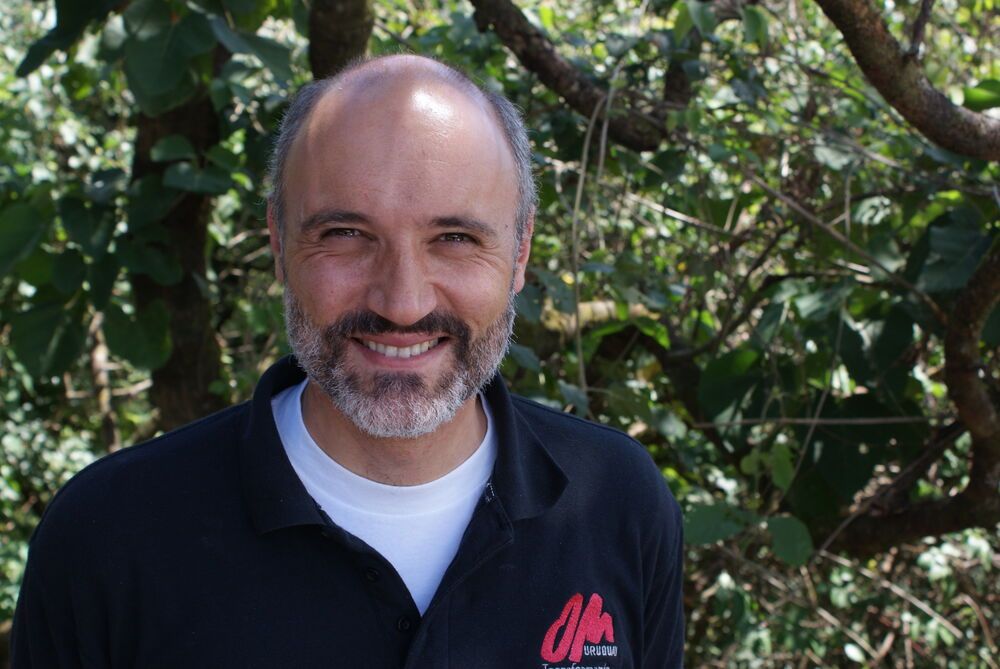 Uruguay: For 2.5 years now, Alejandro Las has been the field leader of OM Uruguay. With a focus on mobilising the Uruguayan church for missions, Alejandro wants to see his field grow.
Alejandro Las is leading the ministry of OM in Uruguay. One of the ways the team shares the Good News with people is through a bookstore called ‘Faro de Esperanza’ or ‘Lighthouse of Hope’. Recently, Alejandro shared the story of a man who was led to God through this ministry just at the right time.

In 2015 we hosted 3 events at the bookstore in order to share our faith. The first two were a “Mexican Night” and an “Italian Night”.  We had a good turnout and a good response to the Gospel.  The third event was the week before Christmas and we presented a live musical for the neighbours.

All these activities left us wondering who would be the first new believer: “Will it be Zuma? Or Eugene?”

Luis Falero, a 58 years-old neighbour and an atheist in body and soul, started to visit us and I invited him to my office to pray and to read the Bible.

After about 2 weeks, I asked him if he had asked God to forgive his sins (a topic that we had discussed many times).  He said no and I asked him, “Do you want to do it now?” He responded no, but that he would do it at home.

A few days later, I asked him if he had asked God and he said, “YES!”

So, the first new believer's name was Luis!

That day, I asked him to choose three people and tell them that he had asked God to forgive his sins and that, according to what the Word teaches, he had indeed been forgiven. He called three family members, one of which was his daughter with whom he had not spoken in over a year. He asked his daughter to forgive him for being such a poor father.

Things started to change profoundly for Luis. His neighbours noted that he had changed a lot for the better. His doctor even told him that he seemed much better, because he had been suffering from illness for some time.

It brought me great joy to see such change in him.

Every day we would present him with a teaching and some practical advice to put the teaching into practice so that he could continue to grow in his faith.

However, one day he started to become stagnant. He stopped going to church and eventually he hardly came to pray and read the Bible with me. So, I went to visit him—I walked the 5 meters to his house and brought two cakes.

He was happy to see me. I gave him his gift and told him that the second one was for his daughter, hoping he would be encouraged to bring it to her, but he was very apathetic.

A few weeks later, we received the devastating news that he passed into eternity while at home.

Our team felt like a rescue team who managed to save a drowning man, only to have him die on the shore anyway. My mind was spinning.

Cris, my wife, told me something that has left me thinking. She said, “we came just in time with Luis.”

I hadn’t taken it that way until she told me. We had so many expectations for him. There was so much hope that he would grow in faith. He had so many beautiful things to discover, so many good adventures to live. This left me with a very bitter taste in my mouth.

But I think Cris caused me to see the other side of things. It may be true that Luis didn’t get to experience an abundant life in Jesus, yet I believe that of the little he knew of the love of God through Jesus Christ, its value for him is a completely different eternity.

Please join OM Uruguay in prayer that the next believer will not only be saved, but also that his/her life will be a true testimony of victory through Jesus.

Published: Thursday, 14 April 2016
Credit: OM International
© 2016 OM International This email address is being protected from spambots. You need JavaScript enabled to view it.

While volunteering at TeenStreet Uruguay, Joy is surprised by teenager Cati's faith in God. The unexpected happens, proving that faith is stronger than circumstances.

Montevideo, Uruguay :: Logos Hope returns to the water after annual maintenance and her crew prepares to resume the floating ministry.

Montevideo, Uruguay :: A Logos Hope crewmember relies on God for strength and the words to say to disruptive inmates at a prison.