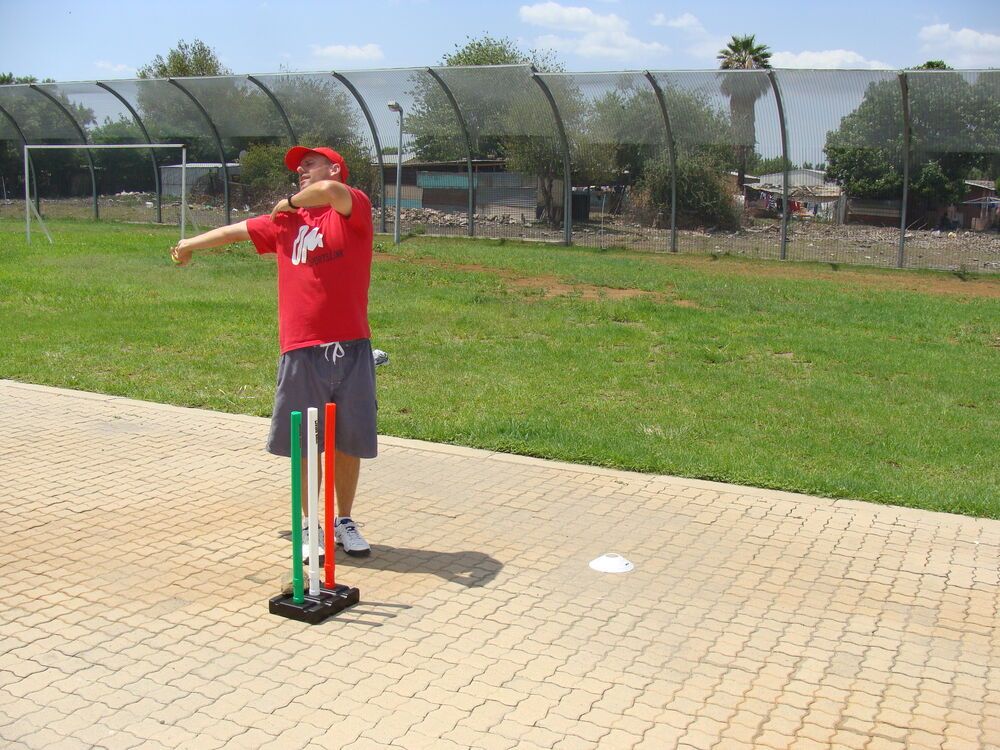 The youth development centre turned out to be different than the team anticipated, as the facility’s population—32 boys and four girls—had each encountered the law and were at the centre for correctional behaviour.

The team went about their ministry as planned—four stations were set up and the kids divided into groups to receive instruction on aspects of sports: bowling in cricket, and passing in basketball and rugby. The team also set up a face-painting area.

“You get a sense that those kids are hungry for relationship with others,” says Andre Kotze, who headed the cricket station, where he showed the children the technique of bowling and instructed them from Matthew 6:19. As a contrast with the surrounding township, the facility offered superior living conditions. “It was almost a protective, positive environment in general compared where they may be living, in conditions where there’s possible abuse and neglect,” Andre says.

Other stations were basketball training, led by Alessa Hagel, who taught from Ecclesiastes 4:12, and rugby, where Tiwonge Tembo shared tips on passing and gave the children a lesson on selflessness, using Philippians 2:4. Elsilese Otten painted faces and shared how beauty comes from God.

After gathering the children for a game of football with a rugby ball, Josh led the group in a final lesson and gospel presentation. The team was also able to donate a rugby ball and football to the centre, as the children had nothing available for recreation. The balls came from Living Ball, an organization that produces sports equipment with the gospel message printed on.

Josh says he felt the lessons they taught, through an avenue of sports, were helpful for children in a correctional centre.

“Sports ministry can be for the rich or poor, young or old, black or white; that’s why it’s so effective, because it caters to all groups in all situations,” he says. “These kids were all in this facility because they’ve made mistakes, which essentially ties into the gospel, how we’ve all made mistakes and we’re responsible for those mistakes, and it’s only through Christ that we’re saved. So to them it’s even more impactful, because their situation ties in really well with the gospel.”

Published: Wednesday, 26 October 2016
Credit: Andrew Fendrich
© 2016 OM International This email address is being protected from spambots. You need JavaScript enabled to view it.