What I do have, I give to you 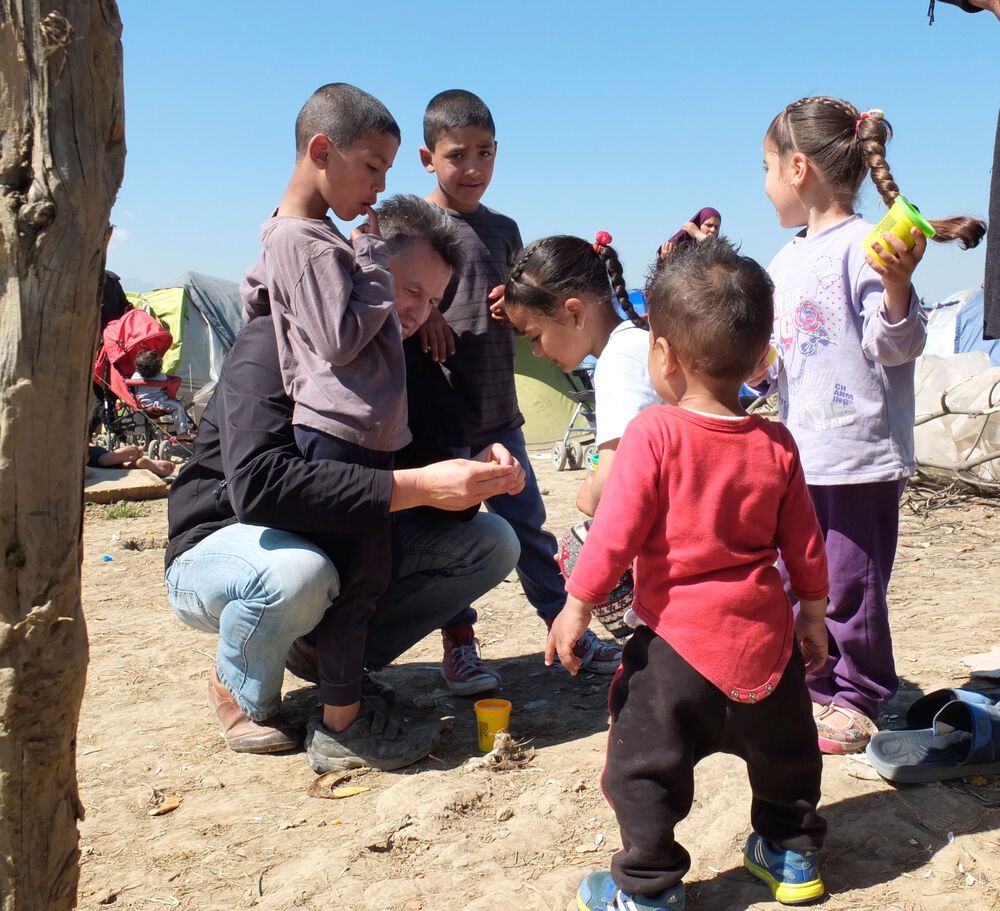 Italy: Christian Pilz, leader of OM Italia, spent a week in Idomeni refugee camp.
Christian Pilz, director of OM Italia, was shocked after spending a week in the refugee camp in Idomeni, where 13,000 people camp out at the closed border to Macedonia. Through talking to different people in the camp, he became aware of the scale of the disaster. “What happened to us?” he wonders. “Does our love for Jesus not urge us to act?” He reflects:

I have no silver and gold, but what I do have I give to you.

This verse from Acts 3:6 was never so close and never as relevant to me as in the week of Easter that I spent in the refugee camp in Idomeni, joining an OM team from Macedonia. I come from a country where one is accustomed to taking care of everything and maintaining order with money and through other material things. Now I found myself in a refugee camp that was beyond all imagination.

About 13,000 people – it is estimated that 5,000 of them are children – are living in tents without electricity, without soft mattresses and clean water in the ‘house’. At first it was cold and wet, the soil soaked and muddy. As the sun came up and the days grew warmer, we were pleased. But only until we noticed that in warmer weather, the little food that’s available doesn’t last as long. Diseases come on easily and spread quickly.

No, the 13,000 people are not on camping holidays in Greece. They also have not decided to travel to Europe because it is so beautiful and green here. They are fleeing from a merciless regime and war in their homeland. Many have lost all their possessions, just got away with their lives. Others could at least take valuable things and some of their clothes. They have all risked their lives. If not while fleeing their country or travelling through Turkey, then later at the crossing of the Mediterranean in a small boat to the Greek islands.

When they finally arrived and thought that they could breathe, they realized that Europe is as merciless as the governments in their home countries. Only when I talked to different people in the camp, I became aware of the scale of the disaster. How little is yet in our media about it.

Children tell of their experiences and show us pictures they have painted. A woman, six months pregnant, asks for a doctor. It is her first pregnancy and until now she hadn’t had any medical check-ups. We visit another woman with her 11-day old girl, born in a tent without medical assistance. What is the greatest desire of the women? A shower. For over a month they have not had this pleasure. The men are usually in the queue for 2-3 hours per meal, hoping to get a plate of cooked rice without salt. Of course, only if something is left. The situation is hard to describe.

And what do we do? We are a group of 8 people in a town of 13,000. What difference can we make? We go to the local farmers and buy apples, to distribute them to families. We assist in picking up garbage. It is all just a drop in the ocean. The verse from Acts comes back to my mind. “I have no silver and gold, but what I do have I give to you.”

We take time for people. Talk, laugh, drink tea together and play with the children. To people who are interested, we give Gospels and New Testaments. We are surprised at how well they are received. Again and again, people look up to the sky while we talk, frightened. We explain that these helicopters are from the police and the fire department and that they are no threat. It is a natural reaction of people coming out of a war zone. We motivate a group of Syrian teachers to start a school for the children. We encourage them to keep going, as much as possible, with ‘normal’ life. At first they are skeptical, but a week later they started a school for 6-10 year-olds.

“I have no silver and gold, but what I do have I give to you.” Peter was on his way to the temple to pray when he said these words. Peter was a Christian, went to church and had a living relationship with Jesus. Peter took time for the one who begged for alms at the entrance to the temple. He stopped, saw the paralytic, looked at him and spoke to him. This man had a home where he could go every night. The Bible says that he was brought to the temple every day. The 13,000 people in the camp in Idomeni cannot just go home in the evening. And we, Christian Europeans, have become good at looking away. In passing we drop a few alms, lock the door quickly and turn up the volume on our TV, so that we do not hear the knocking and the doorbell ringing.

Where have the ‘Peters’ gone? Do we see the needy and do we care for the people? What God has entrusted to us, what Jesus has done for us, does it not move us as it moved Peter? Peter knew that this is worth much more than gold and silver.

When I stood amongst the 13,000 people in the refugee camp, I suddenly was worried about Europe. What happened to us? Does our love for Jesus not urge us to act? Or, do we just not love Jesus anymore?

An OM project, called Safe Passage, focuses on meeting refugees at their initial entry points, providing information as well as water, food and essentials. To give to OM’s relief efforts, or for more information about how to get involved, please contact your local OM office.

Published: Thursday, 21 April 2016
Credit: OM International
© 2016 OM International This email address is being protected from spambots. You need JavaScript enabled to view it.