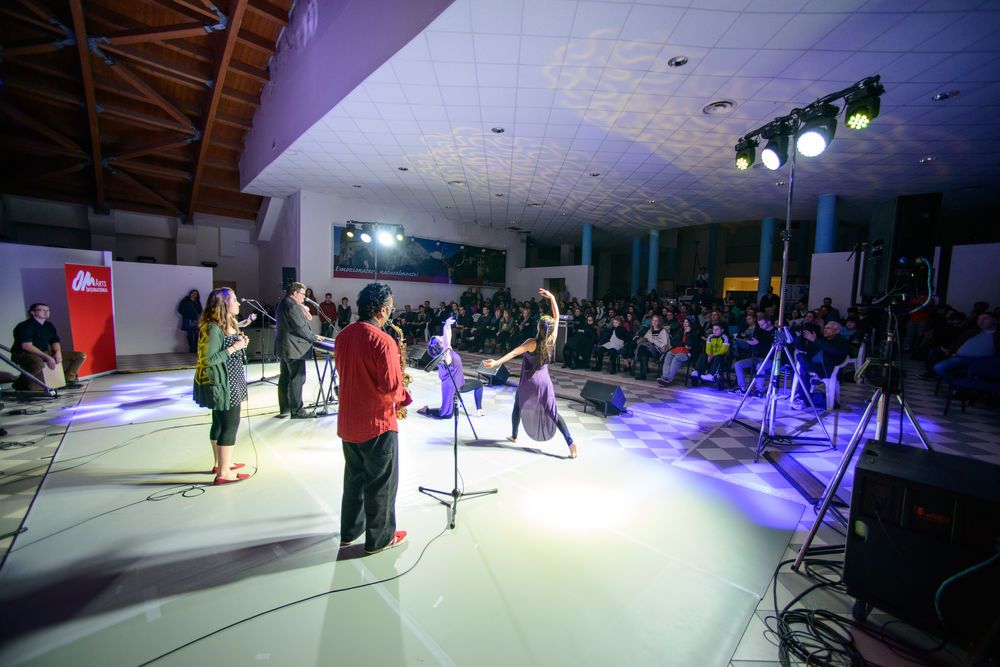 The festival was the culmination of the artists’ hard work while at Incarnate. It was a celebration of the people and the community the artists have been living amongst, and it was a chance for the artists to unveil the work they completed during the programme.

Jessica Cloin, the visual arts mentor for Incarnate 2016, explained that several of the artists who came to Incarnate have never exhibited their work before.

“The festival allows the artists to display their work at an excellent level and also allows the Spirit to speak through the artist and deliver a message, either to the artist themselves, or to a community,” Jessica explained.

A celebration marking the opening of the visual art gallery kicked off Festival Week in style. After three months of preparing their art pieces, the visual artists proudly displayed their creations for the community and had the pleasure of discussing the meaning behind their art with the guests.

Members from the Isola del Gran Sasso Cultural Association and the local mayor’s office made an appearance at the event and expressed their appreciation for the time the artists spent dwelling in their community.

For visual artist Bonnie Chiang, the festival was an eye-opening experience. “I had never displayed my work in a gallery before,” she shared. “That night was so magical! I feel like that's something I'd like to do again in the future.”

After the opening celebration, the gallery remained open throughout the week for members of the community to enjoy the collection of artwork.

As the week went on, a few of the visual artists gave talks and presented workshops in the community. Before teaching her workshop on pop art, Bonnie had never taught in a classroom setting before.

“That was a really interesting and precious experience,” she said. “I liked to see the creativity and diversity in the students. It was good to build relationships with people in the community and it was cool to see how art really connects people.”

“I really enjoyed Festival Week because I got to witness the power of a community. When we join together we can do things that are really powerful. I like that we can work together and see what God has being doing in us and through us,” Bonnie continued.

Meanwhile, the performing artists were busy preparing for Friday and Saturday’s back-to-back performances that would bring the week to a close.

Katya Richter, a songwriter and pianist, sought to speak into the Italian community with the song she wrote and performed, entitled, “Ritornerai,” meaning, “You Shall Return.” The song tells the story of a loving father who longs for his wayward children to return home. The parable of the prodigal son was the inspiration for her work.

“Writing and performing a song in Italian was completely out of my comfort zone. At first I was experimenting and seeing if writing a song in Italian was something that I could do. It was really difficult for me, but also very rewarding,” Katya said. “I thought that the local Italians maybe could relate to the story of the prodigal son or daughter and I thought it could make an impact because it was in their language,” she explained.

After the performance, one of the local Italian women approached Katya and thanked her for taking the time to learn and write a song in Italian. The local woman shared that the song touched her heart and greatly blessed her and her friends.

“It made me feel really good to think that my song could have an impact on someone’s life, on their heart,” Katya said. “It was such a privilege to share this experience [of performing] with the community and to celebrate with the other artists.”

“I'm usually not nervous when I perform, but we didn't have much time to set the lights or for rehearsal. So I prayed,” she shared. “I told the Lord I was dancing this piece for Him, that I didn’t care about the lights or the audience or what people would think because I only care what the Lord thinks,” Sara recalled. “Praying made me very calm. When I was dancing, I had a lot of  emotions, but I felt at peace during every movement. It was cool. I never experienced that before.”

Festival Week marked the closing of the Incarnate 2016 programme, but this is only the beginning for the artists. The goal of the training the participants received is to empower them to use their art to glorify the Lord, on and off the mission field.

Published: Thursday, 28 April 2016
Credit: Lauren O'Shea
© 2016 OM International This email address is being protected from spambots. You need JavaScript enabled to view it.