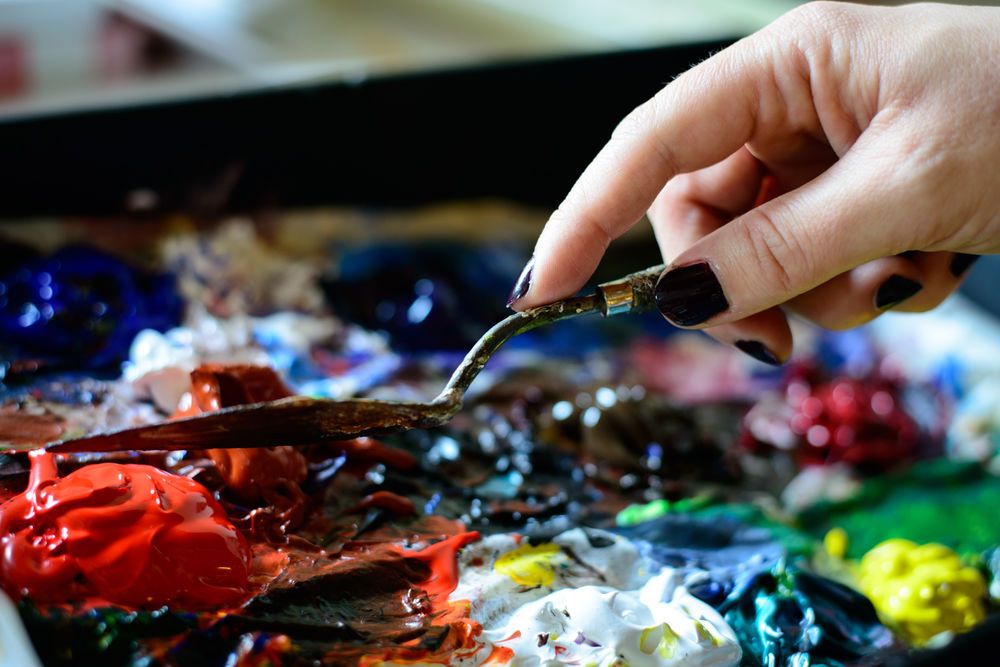 Italy: When I became a Christian during college I really feel that God breathed life into my artwork and it changed - it had a different depth in it, explained OM Arts artist. Photo by Garrett Nasrallah
Incarnate is a 16-week holistic discipleship programme for artists. The first twelve weeks are spent in-residence and during the last four weeks participants are sent out for a practical placement. The programme is designed for artists who are passionately pursuing God, dedicated to their disciplines and are interested in using their art in cross-cultural missions. Participants engage in artistic and spiritual mentorship, as well as academic courses to learn more about who God is, what role they have in God’s story and lastly, how they as artists interact with the stories of others worldwide.

Incarnate 2016 took place at the Centro Evangelico Isola, an evangelical campground just outside the Italian town of Isola del Gran Sasso. Nestled below awe-inspiring mountains and between two rivers, it was both inspiring and secluded - an environment conducive for producing creative works.

Incarnate 2016: 27 artists from 3 disciplines, 13 staff members and 13 guest instructors coming from 13 different countries gathered in Italy with one purpose: to pursue the arts while engaging in cross-cultural missions.

What sets Incarnate apart is its dedication to holistic discipleship. Throughout the programme, participants walk through a set of three academic courses - God’s Story, Your Story and 10,000 Stories - designed to encourage spiritual formation.

“Incarnate isn’t an arts training programme, it’s an artist transforming programme,” said Bill Drake, co-director of Incarnate and OM Arts International. “We want to see transformed artists transforming lives and communities. The academics provide not just left brain stimulation, they provide biblical and spiritual structure to what it is that we’re doing,” he explained further.

The idea of the three courses comes from the progression of the revelation: it comes from God, reaches down to us and then we take it to the ends of the earth. This concept is laid out in Acts 1:8 which says, “You will receive power when the Holy Spirit has come upon you, and you will be my witnesses in Jerusalem and in all Judea and Samaria, and to the end of the earth.”

Amy W., a dancer as well as the curriculum coordinator and member of the spiritual formation team at Incarnate 2016, clarified that, “While the God’s Story course looks at the theology behind the arts, the Your Story course focuses on spiritual formation and the artist’s inward journey with Christ. The focus and the purpose of the 10,000 Stories piece are to encourage the artist to see the stories of others and consider how God wants to intersect their lives with those stories.”

During the programme 13 guest artists, including Colin Harbison, Frank Fortunato of Heart Sounds International and Dick Ryan, rotated in to teach this course and give participants a taste of what using the arts in missions really looks like.

Incarnate embodies aspects of spiritual formation, practical application, is intentionally missional and it’s goal is to communicate that God is a reconciling God who wants to restore brokenness.

“We want Spirit-filled artists to understand the role of the arts in the kingdom of God, the role of the artist in the kingdom of God and that their identity is in Christ, not in their artform or their ego,” Bill said. “This is probably one of the greatest weaknesses of the artists. You’ve got all this firepower in the arts and all this weakness in the area of identity, and the enemy loves it. We want to come against that with everything we have,” he proclaimed.

While participating in these courses, the artists at Incarnate create weekly projects that interact with the academic courses and also develop a body of work to be presented at the festival that takes place at the conclusion of the programme.

The festival is the culmination of the artists’ hard work while at Incarnate. It is a celebration of the people, the community the artists have been living amongst and it is a chance for the artists to unveil the work they have completed during the programme.

Jessica Cloin, the visual arts mentor for Incarnate 2016, explained that often the artists that come to Incarnate have never exhibited their work before and have also never done prophetic art.

“The festival allows the artists to display their work at an excellent level and also allows the Spirit to speak through the artist and deliver a message, either to the artist themselves, or to a community,” she said. “Also for the staff, it’s a way that we get to celebrate the artists and what they’re doing. We are so proud of them. They have stepped into their new journeys, into their anointing and now they have an overflow of [their art]. It’s an amazing moment when we get to literally see people who are wanting to walk in the Spirit, and walk as the Lord did, yet in doing that in the arts and with the giftings the Father has given them. It is our hope that each of the artists go back to their communities and to continue to allow that overflow to happen,” Jessica continued.

After spending twelve weeks in the Incarnate community, participants are sent out for an additional four weeks in various locations for placements. This gives the artists an opportunity to practice what they have learned and experienced in the classroom in a real-world setting. Artist from Incarnate 2016 were sent out to Kosovo, Lebanon, Italy, Moldova, the Netherlands and Israel.

In its relatively short time in existence, the Incarnate programme has produced incredible fruit. A number of participants have gone on to become professionals in their disciplines, an arts ministry was started in Italy and in Costa Rica, a full-time visual artist missionary is being sent out to Belgium - just to name a few of the works being done as a result of the programme.

So, what’s next for Incarnate?

Bill Drake says, “I would like to see this programme made available on a few different continents. Right now being in Western Europe it’s a little cost-prohibitive for some people so I’d like to see this in Central America, in South Africa, in Asia as well as in Europe. And I’m going to set out trying to make that happen.”

Published: Monday, 03 October 2016
Credit: Lauren O'Shea
© 2016 OM International This email address is being protected from spambots. You need JavaScript enabled to view it.