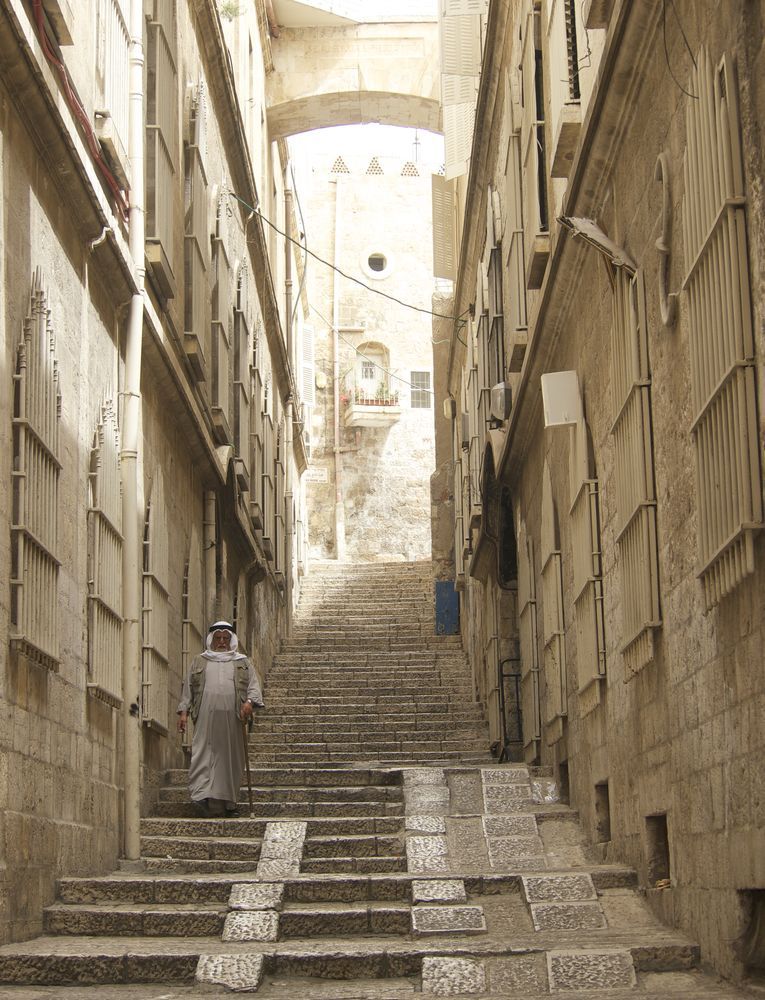 Israel: A Muslim man walks down the stairs into bustling streets in Israel. Photo by Inga Riley
Whenever short-term volunteers come to town, Nathan*, who leads OM Israel’s Arab ministry, has a routine. First, orientation at the church he and his wife attend. Afterwards, a prayer walk around the 90-per cent Muslim neighbourhood. Wandering through the dusty streets, parading past mosques, the foreigners are noticed but not ostracised. “We walk around and pray, try to get into conversations, share about the church, and share about Jesus,” Nathan explained.

Last April, with a group of four short-term volunteers in town, Nathan set out on the normal route. The group reached the spot where Nathan usually turned around, so he stopped to pray. Unexpectedly, a woman came out of a nearby house and offered the group water. Nathan accepted her kind gesture, and she began talking to the group. Soon, she invited them to her house for tea.

The group sat in the courtyard outside the woman’s house. She brought her 82-year-old father outside to talk to the foreigners while she scurried in and out, serving them drinks. “He’s loving talking to us, and we’re loving talking to him,” Nathan remembered. Eager to introduce spiritual topics into the conversation, Nathan asked the man about his family.

Suddenly, the man started crying, telling the group about his son, who had died three months earlier. Without warning, a woman on Nathan’s short-term team also began to cry. She and her husband had lost a child in the past year as well. The couple prayed for the man and his family, to comfort him, Nathan said. “The couple was very new to the work we do. [The conversation] really impacted them,” he said.

Their vulnerability also sparked deeper conversations. “We really made a connection immediately with this family,” Nathan said. In addition to grieving the loss of his son, the man also struggled with limited sight and problems with his legs that prevented him from walking. “We prayed for him, asked for healing for his legs, and talked about Jesus’ love for him,” Nathan explained. He told the man, “Jesus loves us. We’re followers of Him. He loves you and your family, and your hope is in Him.” When the group left that day, they gifted the man a New Testament in Arabic.

Over the next few months, Nathan continued to visit the man and his family, finding new segues into spiritual conversations. The man told Nathan his family were Muslims and loved God. Knowing Nathan was a Christian didn’t matter to him, however. “We’re all God’s children,” he mentioned to Nathan.

On one visit, Nathan found out the man’s diabetic wife couldn’t see, hear or walk and spent her days bedridden. “We prayed for her, that God would heal her,” Nathan said. Because of the family’s physical ailments, someone was always at home when Nathan came. In addition to discussing his health issues with Nathan, the man also shared his fear—fear for his family, fear for his life.

“I would tell him that with Jesus we have no reason to fear. We have eternal life. We have assurance, total assurance of salvation in Him and where we go when we die,” Nathan told him.

The last time Nathan visited the man, he left him with an audio Bible. “Especially for a man like him—he can’t really see that well—to be able to hear would be very powerful,” Nathan said. Too, he noticed that the man had displayed his first gift, the Arabic New Testament, openly in his house. “Whenever I would go, I would see it. The family members would see it, too,” Nathan said. “The hope is that even if he doesn’t [read it], other people in the family would.”

A month or so after delivering the audio Bible, Nathan went to follow up with the man and his family. However, unlike previous visits, when he knocked, no one answered. He tried again a month later, with the same result.

“It was a great encounter and a great opportunity to witness,” Nathan stated. “The prayer is that what we’ve left with them, both in conversations and literature, would continue to bear fruit.”

Having lived in their host country for two and a half years, Nathan and his wife said it’s generally easy to make relationships with locals, but the depth of their relationship with the old man and his family was unusual. “There are lots of opportunities to talk to people, and here, being foreigners, you get lots of attention,” Nathan noted. “It’s easy to talk about spiritual things in a certain sense.” However, it’s harder to go below the surface, he added: “The connection we formed with this family was really deep.”

Pray that this man and his family would come to know Jesus through Nathan’s testimony and the Word of God. In Israel, Christian workers can freely share and distribute literature, but few Muslims respond, Nathan explained. Pray that God would open hearts to the truth of His love and forgiveness.

Published: Monday, 21 November 2016
Credit: Nicole James
© 2016 OM International This email address is being protected from spambots. You need JavaScript enabled to view it.