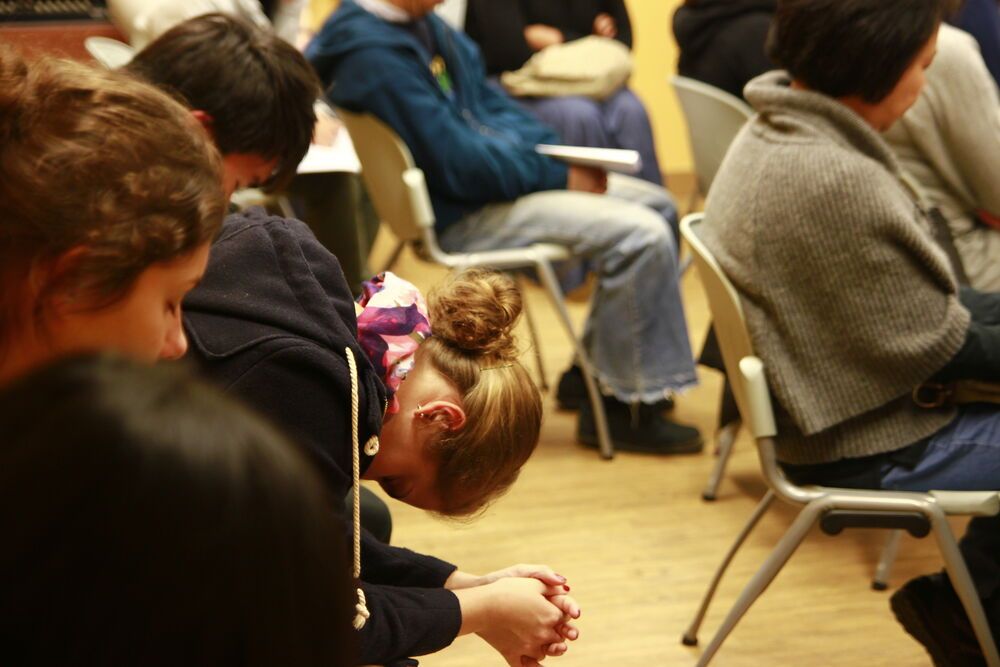 Hong Kong: A young woman participates in a prayer meeting with ministry team.
Ninety-three per cent of Hong Kong’s population is Chinese; the other seven per cent—refugees, expats, and illegal immigrants—composes what the government singularly terms the “ethnic minority,” according to OM worker Vanessa. In 2010, OM Hong Kong moved its office to one of the poorest areas in the city.

After praying about how they could serve their new community, OM workers set up the Doulos Centre, a resource for the surrounding non-Chinese population. The Doulos Centre offers multiple programmes, including homework tutoring, art projects and a girls’ group for children, as well as language classes, cooking groups and health seminars for women.

Among Christians in Hong Kong, OM’s trajectory in ministry among the ethnic minority was radical. “For most of our local churches, we only reach out to Chinese. For us to reach out to the other population in Hong Kong is new thing,” explained Lincoln, who joined OM Hong Kong in 2011.

Primarily, the team reaches out to the Pakistani community near the office. “From the outreaches, we become these Pakistanis’ first Hong Kong friends and first Christian friends,” Lincoln noted. As friends, the Pakistanis then invite the OM team into their homes, often asking for help with Chinese or with their children’s homework.

OM Hong Kong works in tandem with local churches, recruiting volunteers for various outreaches, but all are “starting from zero,” Lincoln stated.

“We are very fresh and new to serve the Muslims,” Vanessa reiterated. “In our local Chinese church culture, we are never cross cultural. For all of us, we are just following the calling of God…. We need to learn from zero.”

To help the team learn how to connect with Muslims, Johnson*, a Pakistani pastor who served in Pakistan with OM for over 20 years, joined the team in Hong Kong.

At first he struggled to connect with the Pakistani community—significantly different than his countrymen in Pakistan—but over the last year and a half, he has gradually gained understanding about how to bridge the cultures.

Johnson organises outreaches and literature distribution; he also speaks to and prays for the Pakistanis in their heart language. During his first visit to a Pakistani home in Hong Kong, the man in the house shared his opinion about the OM team. “I found these people very loving,” he told Johnson. “They teach us how we can love our kids. In Pakistan, we don’t care about love…. In our country, there is not blessing, but in this country, we feel secure. We feel blessing.”

In an effort to “see the unseen,” Vanessa also volunteers as a social worker at a rural village school, whose students are 98 per cent ethnic minority. Most Chinese in Hong Kong avoid the area, she stated. “In the community, they have a very serious problem of discrimination. The local community don’t recognise that they are their neighbours.”

The school is not Christian, so volunteers cannot share the gospel in the classroom, but when students or their families ask about faith outside of class, they are free to answer. Too, the OM workers teach the children biblical values and connect with their families, looking for ways to love those often ignored by the majority population.

At a recent event hosted by the team, a Muslim boy from the school stood inside a church next to a cross. “He was talking about how he loves his neighbour,” Vanessa described. “His family was the first family where we could do a home visit.”

Pray for the team in Hong Kong as they establish cross-cultural relationships and share the love of Jesus with Muslims.

Published: Friday, 19 January 2018
Credit:
© 2018 OM International This email address is being protected from spambots. You need JavaScript enabled to view it.

An OM team in Hong Kong listens to the story of a woman in prostitution and offer her comfort and prayers.

A young woman in Hong Kong discovers how God's plans for her and the gifts that she possesses are good.