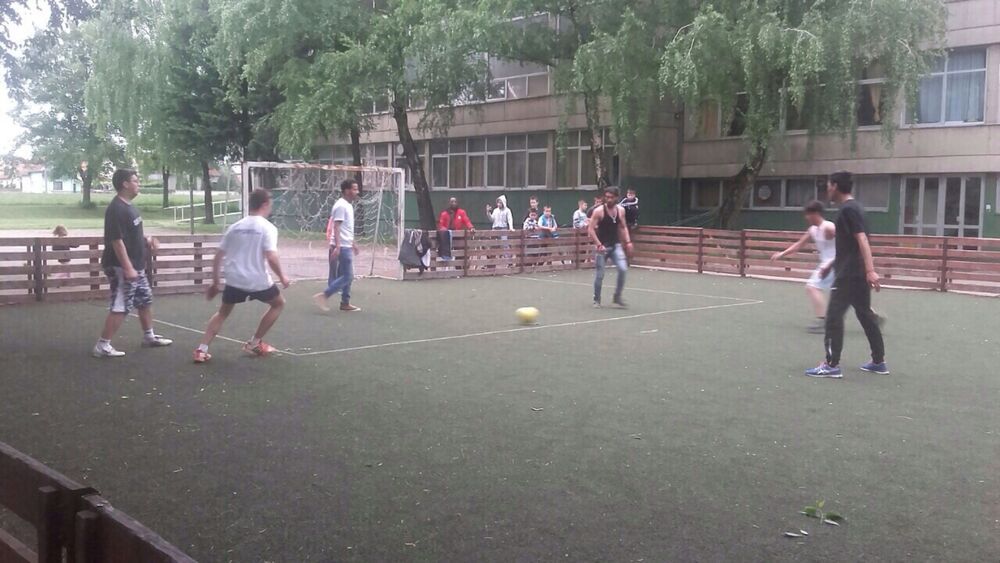 Serbia: OM Serbia refugee friends versus the local Baptist church
At the end of April 2016, after nine months of ceaseless activity working amongst refugees at the Serbian border, the local OM team learnt that the Serbian government would be closing down its remaining facilities for refugees in early May. The government invited OM to assist again when refurbishment is complete and the camp is re-launched this summer. Meanwhile, as the OM team members prepared to put their tent, kitchen and heating system into storage, God was preparing to open a door.

In a nearby town where some refugees now live, OM Serbia’s coordinator Ana and OM volunteer David from Northern Ireland, have been meeting four young refugee guys for English lessons, and playing football too. After two refugees visited the Baptist church one Sunday, liking worship the best, Ana asked if she and David could host the English lessons in the church building rather than in a café, and whether the young men in the church would like to join in with the football.

This led to two special events one Saturday in May. Firstly a football match: church guys versus OM Serbia and the refugees! Then, a special youth meeting in the evening to develop friendships: an ‘International Night’ where Serbians sang Christian songs and the refugees sang folk songs from Syria and Morocco, followed by their national dances. OM provided refreshments and after this special cultural exchange, everyone played cards and games. “It really was a fun evening!” said Ana of OM Serbia.

As OM Serbia and the local church spend time with these young men, please pray for friendships to develop across the cultural divide, and that the love and truth of Jesus is very real to them.

Published: Tuesday, 07 June 2016
Credit: OM International
© 2016 OM International This email address is being protected from spambots. You need JavaScript enabled to view it.