A Baptism and a feast 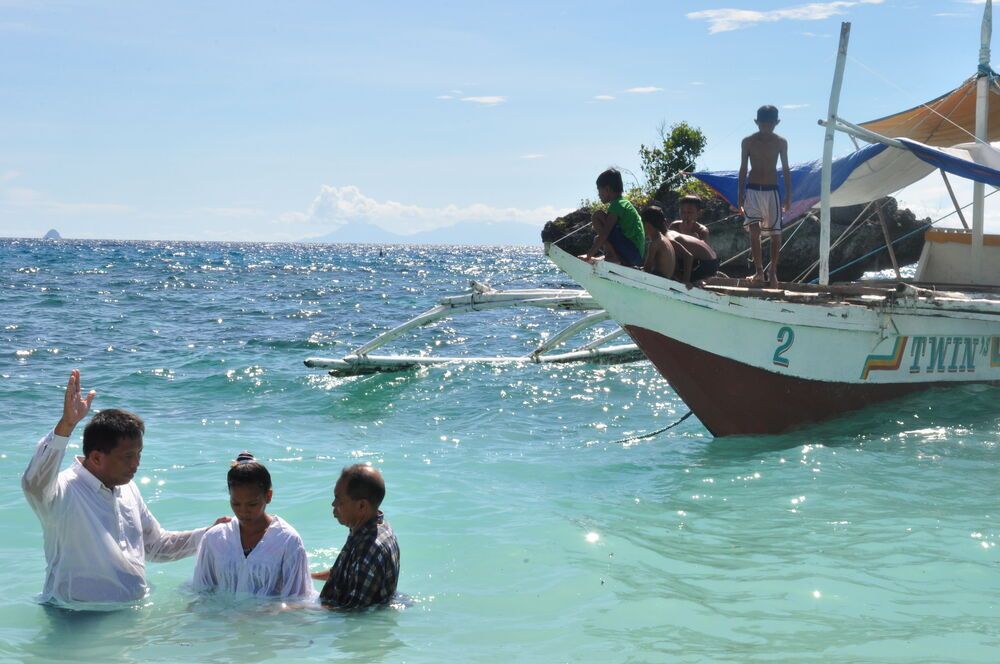 Philippines: ?Seventeen year-old Jenlie Montano before she was baptizedin the water.

On 21 May 2016, OM Philippines-Cebu team expected to witness the baptism of 17-year-old Jenlie Montaño from Kinatarkan Island. However, as the ceremony began, nine other people stepped forward to be baptised too.

“We have been working on the island in a continued process for the past two years and have built over 50 houses since Typhoon Yolanda (Haiyan) devastated the area in 2013,” said Pastor Gerry Rizon, OM Philippines-Cebu Team Leader.

“We wanted to see [these families] living in new homes after Typhoon Yolanda, but that is not all. We looked into the development of their lives [by providing training in livelihood, scholarship programmes for the children, and teaching in values], but how about their souls?”

Kinatarkan Island is highly saturated by Roman Catholicism and is also spiritually bonded by witchcraft and sorcery. There is neither an evangelical church nor evangelical witness in this particular village where houses were built.

Since April, the OM Philippines-Cebu team has been offering Bible study sessions every Saturday, providing an introduction to the Bible and teaching on assurance of salvation and forgiveness. The eight-week Bible study was to conclude with a public declaration of faith through water baptism, but of the 50 villagers attending, only one raised her hand to participate.

“Jenlie has been attending church with classmates in another village,” explained Anie, OM Philippines scholar now-turned communications staff member, "and although she had planned to be baptised there, the event had been continually postponed. So when Pastor Rizon invited participants to consider water baptism, she immediately raised her hand; she longed to declare her new-found faith with courage and boldness.”

Little did they know that the bold decision of a seventeen year-old girl would lead others to be baptised too. Wearing white robes, nine other candidates spontaneously stepped forward to be immersed in the sea with the help of Pastor Rizon and Assistant Pastor, Elvis Demafelis.

“It took us a week to decide for the water baptism; knowing our family´s background as strong Roman Catholics and my mother-in-law as a novena prayer leader,” testified Roseminda Mancio, 35. “However, we were touched by the Holy Spirit and chose to not care anymore on what others would say.”

The villagers, short-term Christian workers, OM Philippines staff together with a missions team from OM Hong Kong prayed for the ten participants, welcoming them into God´s kingdom with gladness.

As a devout Catholic community, religious fiestas are a common community event. So to celebrate the completion of 56 houses on Kinatarkan Island, the first-ever “Fiesta ni Christo” (Feast of Christ) was organised by OM Philippines-Cebu, and the whole village was invited to join in.

Beneficiaries of the newly constructed houses were asked to contribute 100 Pesos and one chicken towards the event, and a second lychon (roasted pig) was donated by OM Philippines. Dividing into five teams, each new home was visited, Bibles distributed and the beneficiaries prayed for. 300-400 people then joined together in the community hall for lunch and an afternoon of family games.

“The beneficiaries still talk about that event to this day, that it is possible to have a ‘Feast of Christ’ on Kinatarkan Island,” said Sally Ababa, National Director of OM Philippines. “I was also touched by their ability to share; 100 Pesos and a chicken is a huge sacrifice for each family. Although I was concerned we would not have enough to feed the community, there was enough, and even more.”

Published: Wednesday, 22 June 2016
Credit: OM International
© 2016 OM International This email address is being protected from spambots. You need JavaScript enabled to view it.

After over 10 years of praying, the Philippines had its first-ever TeenStreet!