Water by the church 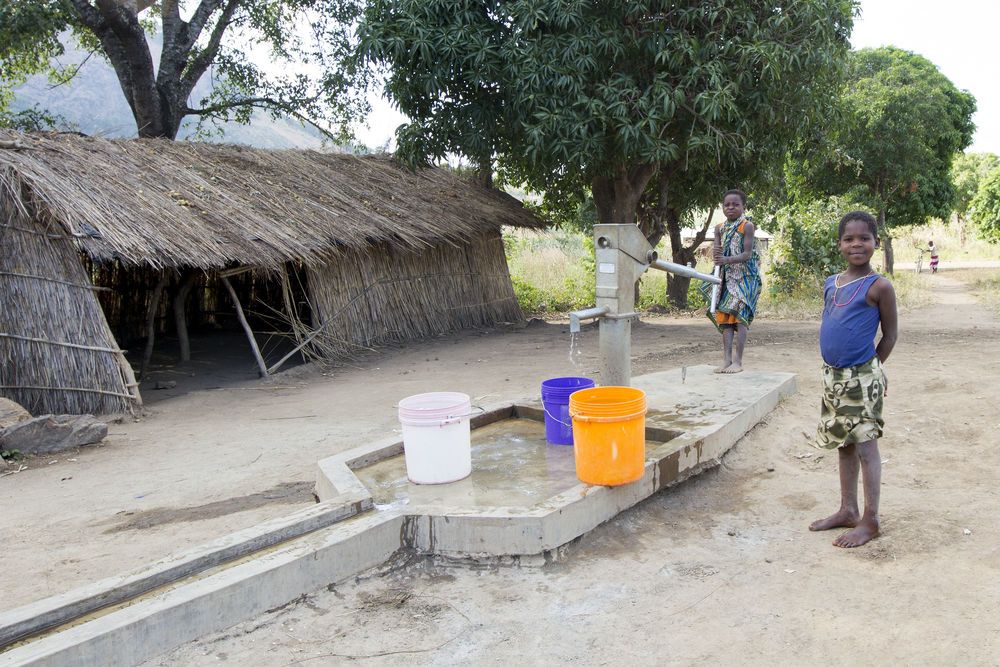 Malawi: Two girls pump water from the OM borehole in Chisopi.
Boreholes are the centre that village life revolves around. The sound of gushing water filling plastic buckets rings out as women and children work the pump, silenced only when it gets too dark.

Carried on bikes, heads and in outstretched hands, the water is destined for cooking, drinking, cleaning, bathing, gardening, making bricks and watering livestock. People waiting their turn appear in no hurry as they sit on overturned buckets, laughing and talking with one another; catching up on the latest news. With the water that spills from the buckets and runs down the drain women scrub brightly coloured clothing.

Water is life in the village and when it’s located far away, life becomes more challenging.

Such was the case in Chisopi, Malawi.

OM worker MacDonald and his family moved to the village in 2014 to continue reaching out to the community they had been visiting since 2008. Lovedale followed later that year to pioneer a school for the area. Fetching water is a time-consuming task, especially collecting enough water for the school each day. Having water close by would be beneficial for the school as well as in the future when a school building and church are constructed. As a team, they prayed for the provision of water closer to them.

Their prayers were answered with half the funds to dig a borehole on the OM property.

In line with the church

With the money provided, a crew arrived in Chisopi to dig the borehole in October 2015.

“We struggled to find a place to drill. They drilled three places and all they were finding was rock,” said MacDonald. “Three places without getting water. It was a surprise to everyone when one guy from the team suggested drilling near the church building. Many people from the community were opposed to that. They are not happy with Christianity here anyway. ‘If you do that we will not use the water cause it will make us Christians,’ they said. When they started to drill, after just one hour, they found water. (The borehole) is straight in front of the door of the church.”

Despite their initial misgivings, the community has embraced the borehole.

“One couple is still refusing to draw water,” MacDonald said. “But everyone else is coming...It is a blessing to the community. Many people were getting water from very far away, but now they are getting water very close.”

Near enough to the church for voices to carry, the team has found villagers listen in on the church meetings while at the borehole.

“When we do Bible study and they are drawing water they pay attention to what we are discussing and how we are encouraging each other as believers,” said MacDonald. “They listen.”

The borehole has experienced more traffic than usual lately, as the next closest well has not been working.

Up to 150 families have come to the OM well for their daily water, providing an opportunity for them to hear the Good News.

Pray that as people draw water from the borehole they will call upon the living water.

Published: Thursday, 28 July 2016
Credit: Rebecca Rempel
© 2016 OM International This email address is being protected from spambots. You need JavaScript enabled to view it.