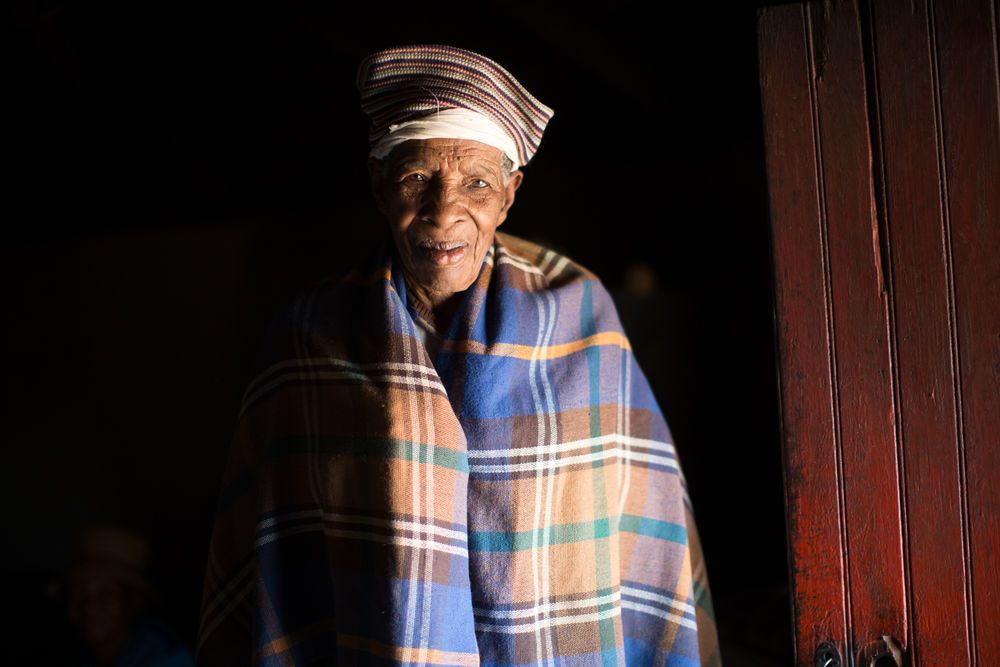 Lesotho: An elderly lady from Lesotho wearing her traditional cloths.
Lesotho (le-SOO-to) is a peculiar nation, an enclave in the heart of South Africa referred to as ‘the Switzerland of Africa’ for its mountains and high elevation. Formerly Basutoland and independent from Britain for 50 years, its 2.1 million people speak Sesotho. In quality of life, this Belgian-sized country bears no resemblance, however, to its European counterparts, with an infant mortality rate more than twelve times that of Europe, the world’s third-highest HIV/AIDS infection rate (over 23%) and a life expectancy of 52 (30 years less than for Westerners). Most inhabitants claim a veneer of Christianity that belies a foundation of ancestor worship permeating their worldview and blocking progressive change. For Christians seeking to transform lives and communities, where does one begin?

When Michael and Rene Exall recognised God’s call to serve the people of Lesotho four years ago, it meant choosing a small village in the north, east from Butha Buthe, near Liphofung Cave. Most villages are tiny, remote and linked to main roads by difficult footpaths, yet every day finds people walking these paths and roads, seemingly hours from anywhere—women with firewood or other large bundles on their heads and infants tightly cocooned on their backs. There are few alternatives; even collective ‘taxis’ are a luxury for two-thirds of the population eking out a life below the poverty line. The Exalls set about inquiring from village chiefs what the most pressing needs were.

Serving in health and education

The Exalls were originally sent from South Africa to the mission Joy to the World in Lesotho, where a ministry centre existed that included a medical clinic and a pre-school. During ensuing months, they hosted a number of short-term teams from OM South Africa’s Mission Discipleship Training (MDT) and other organisations and churches, engaging in village evangelism and practical services such as repairing houses and gathering firewood.

In time, the Exalls joined OM in order to see the work spread. The simple medical clinic was warmly welcomed, as the nearest clinic is 15 km and the nearest hospital 40 km away. A nurse diagnosed simple ailments and dispensed affordable medicines. Local village chief ‘Majone Kabai recalled that the nurse would also go door-to-door helping the sick, getting to know the community and informing the chief on the welfare of the people. But the clinic also provided instruction on family planning, which women were desperate for. Many husbands work at the mines or in South Africa for long periods, assuming to produce more children every visit home—only to leave yet another life in the wife’s care. Sadly, the clinic could not indefinitely support a full-time nurse and has been closed. It is hoped that it will be re-opened soon as a service to the people.

The pre-school started in 2000 struggled initially, since the goal was not only to create a safe and friendly atmosphere that fostered learning, but also to provide a hot meal every day as a direct benefit to the children and a blessing to their poor families. This meant foraging for pumpkin leaves and planting vegetables, as few parents would pay the nominal school fee. Yet it was soon apparent that this pre-school was different: it was a ministry and investment in their families’ future. Today, there are 40 children and the reputation grows. Headmaster Mathato Masera is proud of her work and is able to be the main provider for her family, including an invalid husband. And surrounding primary schools say it is obvious which kids come from the mission pre-school—they are polite, well-disciplined and ready to learn.

The Exalls lead a Sunday church service open to all and assisted by translator and assistant pastor Thabang Mamooe. Michael learnt early on that the term ‘missionary’ spelt trouble; people expected handouts, creating a dependency, whereas a ‘pastor’ is accepted as an indigenous church worker. There are few evangelical gatherings, as most churches are either Roman Catholic or personality cults whose leaders exert total control. Either way, people are banned from reading God’s Word privately. And even real churches collide with culture; the concept of punctuality is fluid. A service may start at 11:00, but people wander in up to an hour later. Thus, one leader exhorted his flock, “The Bible says that we are supposed to wait upon the Lord, but you are making Him wait upon you!”

Hunger to hear from God

Yet God’s Word bears fruit. In the village of Sencholo, ‘Mamadono Lethena had no personal knowledge or experience with God. Yet she was the type who knew everything about everyone; people would tell their tales to her and seek her advice. Addicted to snuff and unwilling to share it with others, she would retort that she was a born-again Christian and thus had none to give. Long a convenient lie, she one day realized that she didn’t know what she was talking about, and that she should investigate this ‘born-again’ idea; what did it mean? As she read the Bible, she trusted Christ. Others witnessed a complete transformation in her, and word spread. Her testimony was that no one has power to transform his/her own life; Christ alone is able. She remains influential today, speaking of the Gospel and teaching against ancestor worship and the ban on reading the Bible, noting that, “When a person is really changed on the inside, others will see it on the outside.”

Michael and Rene understand that too few village people will ever look to the church for life-giving answers, but it does not mean that they are not interested in finding truth. In order to offer a different pathway, the Exalls have started Questions & Answers in several villages that are open to people of any religion. The focus in clear: What does the Bible say about any number of social and personal issues? For several hours on a Friday afternoon, people can ask any relevant question, which will be thoughtfully addressed the next week. Response has been enthusiastic and some groups number up to 50. Several other villages are requesting a Q & A meeting, and the Exalls believe that God will transform communities through transformed individuals. They eagerly await the arrival of Stephan and Christiane Schmidt (from Germany, now in South Africa) next year to accelerate this pivotal ministry both in terms of creating an apologetic foundation for new churches where there are none, and to disciple many young men and women to reach their peers. This could make the Q & A concept transformative anywhere in the world.

Published: Thursday, 01 September 2016
Credit: OM International
© 2016 OM International This email address is being protected from spambots. You need JavaScript enabled to view it.

The coronavirus has opened up doors to share the good news in the small mountainous country of Lesotho.

An innovative approach to studying the Bible are bringing people closer to God in Lesotho.