By the beautiful stones 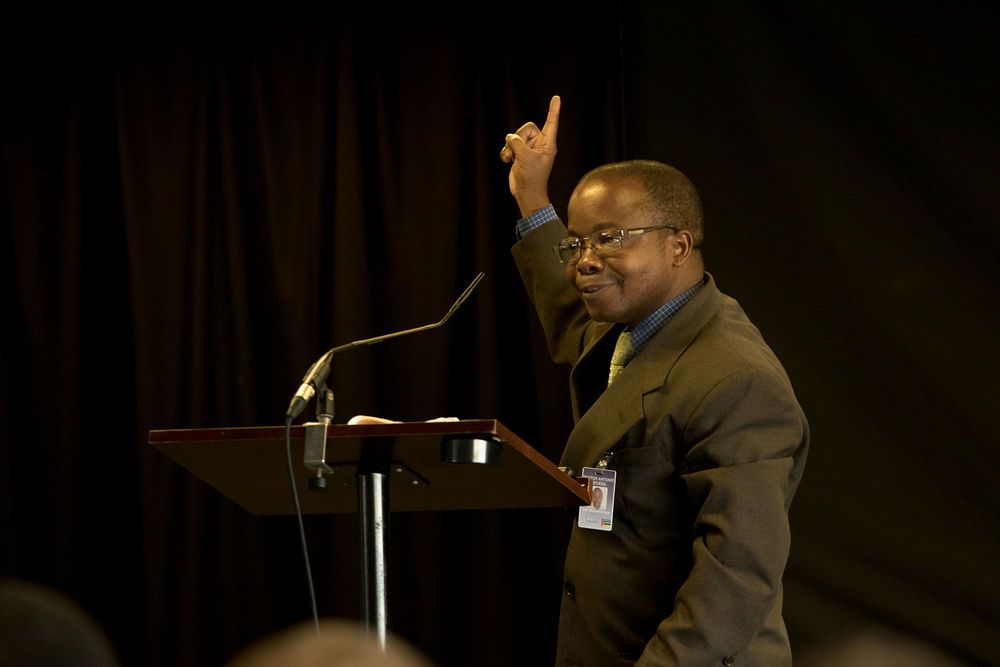 Mozambique: Maputo, Mozambique :: Pastor Antonio Nipueda (Mozambique) inspires pastors from all over Mozambique during a pastors conference on board Logos Hope.
Mozambican-born pastor Antonio Nipueda’s first experience with Operation Mobilisation nearly cost him his insides (or so he recalls). In 1995, committed to serving with the Doulos for two years, Antonio climbed on board in Cape Town, South Africa, where the ship was docked before its trip around the Cape. Heading east along the coast, the ship experienced the Cape’s infamous turbulent waters—and, shortly after, a typhoon—giving Antonio a rough first impression.

“All my stomach and liver fell out,” Antonio jokes about the seasickness. “I decided to go back [to land].” But the ship’s personnel department told him no, that the rough waters would pass. As they predicted, during a 10-day trip from Madagascar to India, smooth sailing eased Antonio’s mind for the rest of his time on the Doulos.

In 1997, Antonio’s time on the ship came to an end in Australia, but his work with OM was just beginning. Returning to his native homeland, Antonio began to collaborate with the OM field leader for outreach strategies in Mozambique. During the Mozambican Civil War, which lasted until 1992, OM had focused on outreach through aid—providing food and shelter for refugees. In the years after, then-OM Mozambique field leader Raymond Robyn shifted his focus to set up mission training in northern Mozambique. Antonio willingly shared Robyn’s vision for church planting—a vision that led Antonio and his team to the northern village of Mecula.

It took the team five days to travel to Mecula, due to a lack of roads.

“We had to take our bush knives to cut trees, to make a bridge so we could cross a river,” Antonio remembers. In the year 2000, when Antonio’s team traveled north, the village of Mecula had only one house structure. The rest of the village came into view as little more than clusters of mud-thatched huts. The village existed separate from the civilised world—though it was not without Islamic influences, as several imams resided in the area.

The OM team was offered shelter at a nearby military barracks, but Antonio asked government officials to move them, due to the threat of insurgent landmines. They were taken 10 km east to Musoma, a village on the Lugenda River. At a mosque built on the riverbank, the local Imam charged the other Muslim leaders in the area to care for the OMers; Antonio, his family, and the OM team were directed to a local nature reserve—a “place of many beautiful stones,” Antonio immediately saw, but carrying a dark secret: the OM team heard reports of demonic activity there, causing the locals to flee as the number of deaths in the community continued to rise.

The Imams asked Antonio and his team to pray over the area, to combat the evil they couldn’t overcome. The team complied, praying over the stones for God’s glory to be revealed there.

“From the year 2000 until today, no one has died there,” Antonio says. “The ladies can wash their clothes, the kids can swim, the fishermen can fish.” On the river by the beautiful stones, once a place of fear and darkness, OM Mozambique now shares the gospel of peace, as local Muslims have asked Antonio to show them the powerful God who could overcome demons.

“I cannot show you with your blind eyes,” Antonio told the locals. “You need to have spiritual eyes to see this God.”

To this day, Antonio’s church in Mecula is growing amidst the Muslims as they encounter Jesus with spiritual eyes.

Please pray for Antonio and his team as they try to determine ways to help the locals grow food. Currently, any attempts to grow crops are ruined by wild animals, and the villagers have no way of protecting their food from herds. Pray for resources to secure sustainable food production.

Published: Wednesday, 08 March 2017
Credit: OM International
© 2017 OM International This email address is being protected from spambots. You need JavaScript enabled to view it.

“God is working in this community,” James said. He and other Christians in his village are challenging the culture by living their lives for Christ.