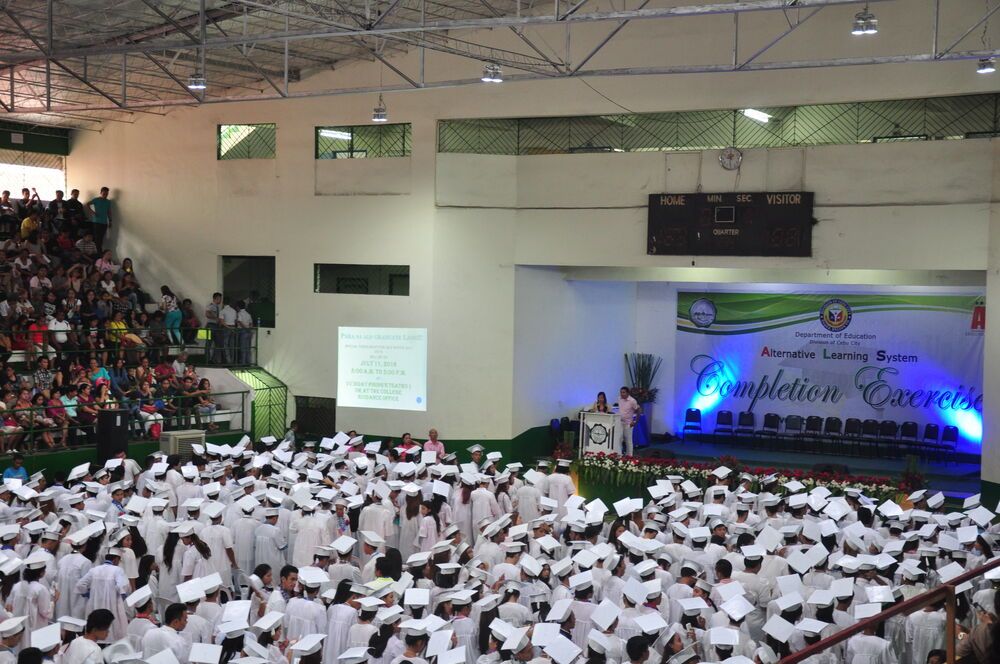 Philippines: OM Philippines trains and provides opportunities for school drop-outs through their ALS programme. More than 1000 students have earned their elementary or high school diploma.
OM Philippines’ Path of Life Ministries continues to train and provide opportunities to school drop-outs to enable them to qualify for higher education and employment through its Alternative Learning System (ALS) Program, based in Cebu.

On Saturday July 9, 2016, in the gym of the University of the Visayas, together with over 1,000 former ALS graduates, 34 students walked proudly to the stage to receive their respective elementary and high school diplomas.

“Malipayun ko nga naka-graduate ko. Mapasalamaton ko sa Ginoo sa tanan niyang gihatag nako, (I am happy that I graduated already and I am also thankful for everything God has given me.)” said fourteen-year old, Daniela, one of the new elementary graduates.

Daniela, who completed Grade 2, had been intermittently attending formal school but her attendance dropped off when her father was imprisoned due to selling prohibited drugs, leaving his four children under the care of their mother, also a drug addict.  Living on the streets of Cebu, eventually their mother abandoned them, too.

The street was the children’s playground during the day and the place to beg for food from passers-by.  Each night Daniela settled down to sleep on the pavement covered with cartons and used plywood.

“Sa dalan ra mi matulog. Naa pud usahay nga i-demolish mi sa mga city officials. (We slept on the streets. There were times when the city officials moved us or shoo us away.),” she added. “Nalipay ko nga giluwas mi sa OM, (I am so happy that we were rescued by OM.)”

For several months, Daniela attended the ALS program during the day and went back to the streets after class. A few weeks before Daniela’s graduation, OM Cebu’s Social Worker successfully processed her papers so that she and her younger sister are now able to enjoy safe refuge in a local shelter.

The Alternative Learning System (ALS) is one of the government’s Education for All programs which allows school drop-outs to take an official exam, allowing those who pass to accelerate to their next level of formal education. OM Philippines is accredited by the government to train, teach and facilitate intensive reviews to out-of-school learners, equipping them to take the Accreditation and Equivalency Examination required by the Philippine Education Department.

Out of 35 learners, only one did not pass the exam; four passed elementary level and 30 attained high school level.  Several of the high school graduates are now looking for jobs while others have enrolled in college.  “Just arrived from school,” posted Joel on his Facebook status, a regular attendee of OM’s Street Kids’ feeding programme who completed Grade 3, then elementary level last year and high school level this year. “Hard to believe, but it is true,” quipped Walter, Joel’s friend selling bottled water on the street.  After the ALS graduation, Joel immediately enrolled in Marine Engineering at the University of the Visayas.

“If you can see your dreams while closing your eyes that means it is not impossible to fulfill them. This life is never easy, however if it is lived with God – if you trust God, you can do it,” stated OM Philippines Board member, Bing Roncesvalles, at the Thanksgiving dinner following the graduation ceremony.

Published: Monday, 08 August 2016
Credit: OM International
© 2016 OM International This email address is being protected from spambots. You need JavaScript enabled to view it.

After seeing the need for Jesus' love in his own country, Pastor Philip knows he needs to act.