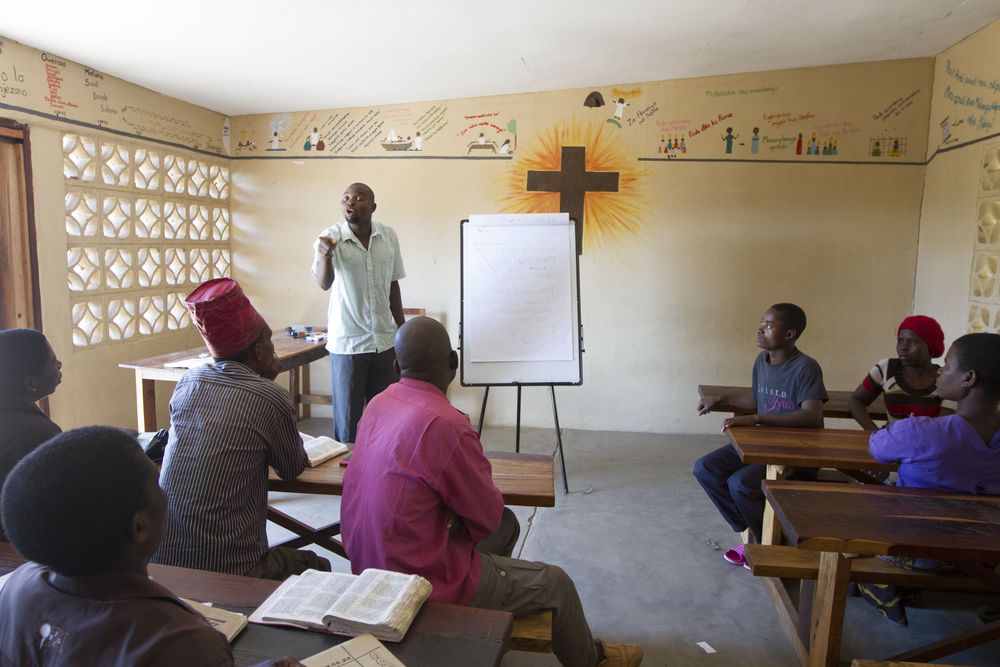 “The big picture is to challenge them about the suffering of Jesus Christ, the death and resurrection,” he explained. “What does that mean to me? If I say I die to self, what really happened in my life? And what happens next?”

The training lasts one year and consists of three months of in-class learning and nine months of practicals. For the practicals the students usually return to their own homes and either start new ministries or join existing ones through the church.

This year’s class was made up of 12 people – “like the 12 disciples,” one student was quick to speak up. Ranging from 20 years old to over 50, the group came from all backgrounds and stages of life.

Through the training Fredson noticed that it was harder for some to really understand scripture as they were used to memorising passages without studying the meaning.

“You need to give them things to discuss so they will discover and be able to explain for themselves,” said Fredson. “Like the story of Mary and Martha. I asked two guys what Jesus was doing? What happened to Mary? To Martha? What did Jesus say about these ladies? It is a simple way, but then they get the whole picture.”

Every Tuesday the group tackles marriage issues. Those who are married because it applies to them now, and those who are single because it might one day.

In Malawi, broken families are the norm: divorce, absentee parents and abusive relationships are common.

“We face the men thinking they have more authority than women,” said Fredson. “That the women don’t have the right to say anything. It’s a challenge but we thank God that these challenges come out and we are able to address them.”

One couple in this year's training did not agree about money and it was driving them apart. The husband said the money was his, not the families. The wife stopped sharing her thoughts with her husband and there was a lot of confusion and shouting in their marriage.

“We helped them through the scriptures about what God says about marriage and the responsibilities of the husband and the wife, and why God gave them these responsibilities,” Fredson said. “The couple agreed they needed to make it right. The husband said that the money that comes into the house would be for them together and he would be accountable to his wife, and she to him.”

Another issue that comes up is caring for relatives. Once a child has grown and become financially stable the relative that raised them will call on them saying, “I invested in you when you were young, so now you need to pay back.”

“One couple, the husband was giving everything to help his family, so the wife felt like her husband loved his family more than her. It was a big problem. We showed him that he needed to take responsibility in his house and not go to the parents. You can’t make your family struggle just to help your parents. Then you need to agree to bless both families. Helping only one family brings division.”

Kelvin came to know the Lord through the OM prison ministry. After being released he returned home where OM worker Peggy visited him and his family a few weeks later. She invited Kelvin to attend the Discipleship course as a way to grow his newfound faith. His family, though not sharing his beliefs, supported Kelvin when he said yes, as they were very thankful for the OM team who had brought their son food and visited him in prison; they had no idea their son had been arrested.

In Discipleship, Kelvin was eager to learn and quickly became one of the best students in the class, though he had been a Christian for the shortest period.

“I have completely changed,” said Kelvin. “Especially my behaviour. I know the Bible and how to use it and am walking in the spirit.”

Returned home for practicals, friends and family remarked how much Kelvin has changed; becoming a man of good character and morals. Kelvin has started a Bible study and is eagerly sharing what he has learnt with others.

Praise God for the work He is doing in people’s lives! Pray for the students as they are on practicals, that they will remember their training and show the light of the Lord in every circumstance.

Published: Tuesday, 20 September 2016
Credit: Rebecca Rempel
© 2016 OM International This email address is being protected from spambots. You need JavaScript enabled to view it.