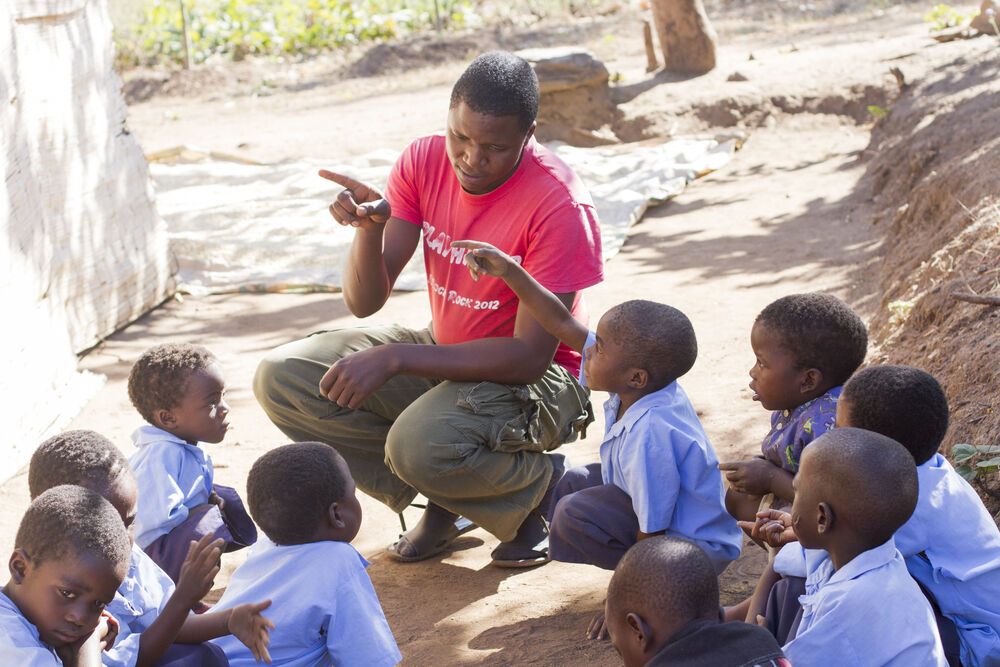 Malawi: Lovedale, Zambia, teaches his class to write the letter c in the dirt outside Mbweni School in Chisopi, Malawi
Chisopi is a village in the mountains, 30 kilometres from the OM Malawi base. MacDonald, an OM worker, visited the village often to hold a Bible study and get to know the culture. When he and his family moved to the village in 2014 OM Malawi had the vision to start a school, which is where Lovedale came in.

Originally from Zambia, Lovedale completed the Teachers Training Course at OM Zambia where he heard about the opportunity to pioneer a school in Malawi. After spending three months at the Ntaja base to get to know the culture Lovedale moved to the village.

“In the beginning it was children’s ministry; when we said it was a school people dropped out,” remembered Lovedale. “They were told that if you go to school they will make you drink your own urine and eat rats.” Because of these lies, the people of Chisopi did not consider education important.

“I started putting a few lessons (into the children’s ministry), like how to say greetings in English. The children shared that to their guardians and it was like ‘oh, maybe this is what school is all about.’”

More and more children started attending class under the trees until they numbered around 100. Seeing that the community had accepted the idea of a school, Lovedale selected 19 students between the ages of four and five to be the first nursery class of Mbweni School, which translates to ‘have you seen?’ and is also the name of the hill behind the village. Each year a grade will be added to the school as that class advances.

January 2015 classes shifted to the enclosed porch of the building where Lovedale now stays. When a second class was added the following September the older grade moved into the thatched church building.

“I’ve seen changes in the students, especially standard one,” Lovedale said. “[The local language] is full of swearing. They use it all the time; the kids would use it on me. For them to change and realise to say those words are not good, that’s a big change. They’re able to identify that this is wrong even if it is right in the culture…just to identify that there is a God who doesn’t like these things for me is a big change.

“No students have become Christians. Not yet. It’s a thing we take step by step. We do devotions each day, usually we have a theme for the week like ‘helping.’ Then after school we find someone to help so that the students have a picture of what ‘helping’ means.

“I stand there, teach them what I feel God wants me to teach, but saving comes from Him.”

The main language in Malawi is similar to a few of the languages in Zambia which made it easier for Lovedale to pick up. Few people speak Chichewa in Chisopi however, so learning the language spoken in the village was crucial in connecting with the community.

“Not knowing the language and still teaching was…painful,” admitted Lovedale. “But if you want to learn the language go to the kids; they have been my teachers. Older people when you greet them in their language continue speaking, they don’t care, they say ‘you need to learn.’ But with the kids when you don’t understand they stop and explain.

“Abaku (‘grandma’ who is the school cook), has been a big help. She’s in the kitchen so I just ask ‘how do you say this?’ and then I teach it.

“It wasn’t always nice, but when I sit down and look at how things were in the beginning and how things are now, I see change and that’s very encouraging.”

“One of the things about the [people] here is they really appreciate prayer. If they are sick they say ‘pray for me.’ To me that’s great. I’ve never seen [someone] praying for a sick person since I came here, but they really appreciate it. You don't have to do it in the open, no one has to know, it can just be between the two of you.”

Pray for Mbweni School to continue to grow and have an impact in the children’s lives. Pray for the teachers to have creativity in their teaching and for more teachers to come. Pray for Lovedale and any others who join the team to pick up the language quickly to be able to communicate effectively. Pray for the provision of funds to build percent classrooms. Pray for the people of Chisopi’s eyes to be opened so that they may see the light.

Published: Friday, 05 August 2016
Credit: Rebecca Rempel
© 2016 OM International This email address is being protected from spambots. You need JavaScript enabled to view it.