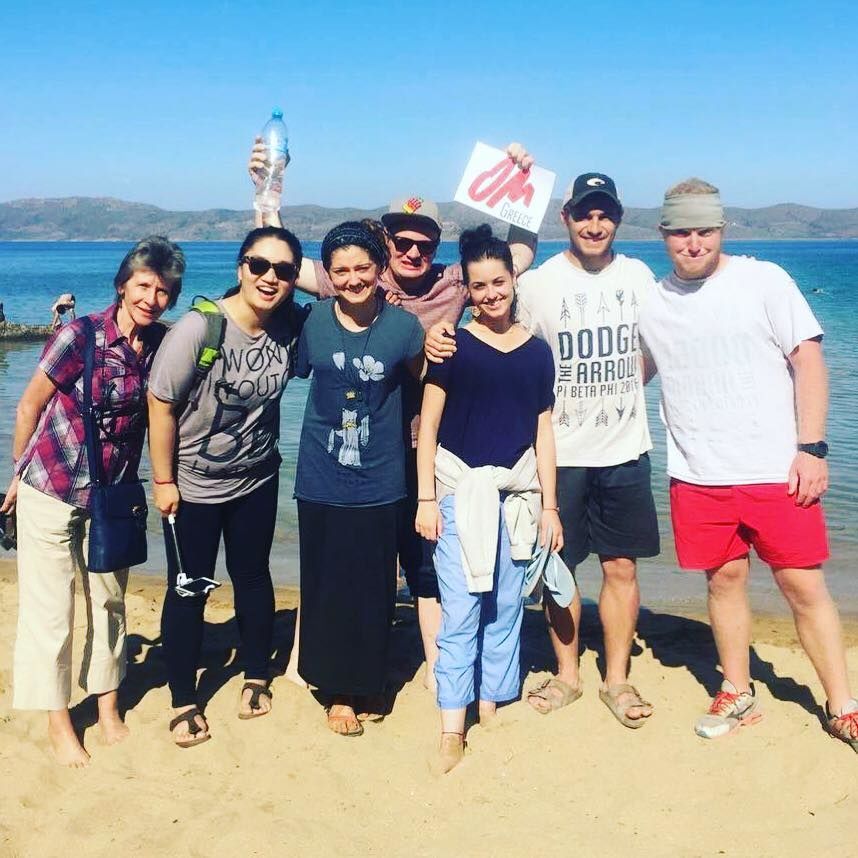 Greece: Short Term Volunteers with OM Greece make a stop at the beach after a day serving at a refugee camp near Athens
A few short months ago, OM Greece’s refugee response team on Lesvos Island returned to Athens to join in ministry with the main body of OM Greece. Through this larger, combined team, God has allowed monumental progress to be made in local refugee ministries. Since Greece’s neighbouring countries have closed their borders in recent months, thousands of refugees have found their journeys completely halted — giving summer volunteers the chance to serve and spread God’s love at a time when it’s much needed. Since April, OM Greece has been blessed with many opportunities to serve in numerous refugee camps in and around the historical Athens area.

One OM volunteer saw firsthand that a last-minute change in plans is often God’s way of setting up an amazing opportunity. When Lilly found herself at a different camp than expected after a schedule switch, she was able to use her fluency in Arabic to form bonds with many of the camp’s children.

A simple conversation with a 12-year-old girl led to a deeper connection and even a chance to pray with her parents. “As the van was departing that day, the young girl ran up to the van and asked me to write down Jesus’ name so she could ‘remember the one who loves her.’” They are now able to keep in touch via Whatsapp, and Lilly prays that Jesus continues to reveal more of himself to the girl and her family.

Another OM volunteer was able to show a young Afghan man a new perspective of Isa (Jesus). When a few Afghan refugees began helping Ryan and his team pick up garbage in a local camp, Ryan was able to meet and learn more about the life of Mohammed*, a young man separated from his parents and two younger brothers since travelling through Turkey. “Mohammed travelled from Turkey to Greece only to find that his family was still stuck in Turkey, while he is now stuck in Greece,” Ryan said.

As they continued speaking, Ryan’s question of the meaning of Mohammed’s necklace initiated a conversation about holy books. Using common stories that tell of sacrifice for sins to enter the kingdom of God, Mohammed learned a new perspective of Isa — as the Lamb of God who came to take the sins of the world. Mohammed was open to receive prayer in Isa’s name for his brothers and parents. He requested prayer for his aunt and cousin in Switzerland who may be denied permission to stay, asking prayer for Isa to heal the cousin’s developmental disability.

They also prayed that Mohammed would have a personal revelation of Isa Messiah as his personal Lord and Saviour — not just the prophet of Allah, but as a ‘straight path to God’. The team asks for prayer for Mohammed’s family to be reunited, and that the joy and peace of the Holy Spirit will fill him and overflow to others.

With the future in mind

Even the briefest of encounters have made lasting impacts. Two volunteers were surprised to see a family from Austria walk into their camp one afternoon and were reminded in a powerful way of the potential long-term effects of their service.

“Since visitors aren’t too common, Trent and I were so surprised when an unfamiliar man approached us and spoke in English,” said volunteer Brandon. “As he stood there with his wife and son, this father smiled and shared that back in 1950 when he was only 3 years old, he lived here at this very camp. And he was here now to share part of his childhood with his family! He then proceeded to meet the other refugees at the camp, and they talked about their experiences with each other.”

“So often during our time in Greece, I would view these camps as a place that lacked hope, a place where these people were stuck. But as I saw this man so eager and excited to share about this camp with his family, our ministry in Greece just clicked for me — especially because this man was 3 when we he was at the camp, and I would spend the majority of my time playing with the younger kids. Imagine that in many years down the road, one of the kids we played with or the adults we interacted with recalls how, during a difficult time of fleeing danger and living at a refugee camp, a group of Christians who loved God visited the camp and shared that love with them!”

He concluded: “though we couldn’t do things like solve the refugee crisis while we were in Greece, our team was able to be used by God to share love with these people during a difficult time, and that made our ministry and our service to God so worth it”.

The OM Greece team will continue serving refugees in and around Athens in the coming months and will keep seeking outreach and ministry opportunities to both refugees and locals. We praise God for opening so many doors during the past few months. Please pray with us as we continue building relationships with government officials, camp leaders and other decision makers that God will continue opening the exact doors needed to build His kingdom in Greece.

To give to OM’s refugee aid relief efforts, or to learn how you can get involved, please contact your local OM office. For more information or stories from Greece, email This email address is being protected from spambots. You need JavaScript enabled to view it..

Published: Monday, 01 August 2016
Credit: OM International
© 2016 OM International This email address is being protected from spambots. You need JavaScript enabled to view it.

United communities of believers reflecting Christ in the world

Fion Lau, from Hong Kong, shares about her year serving with OM in Greece.

An OM Greece worker explains, while she is babysitting, how she helps ladies involved in human trafficking and the sex industry.

Natalia went from dreaming of a life of comfort to serving the vulnerable—and she wouldn’t have it any other way.