Showing the love of Jesus 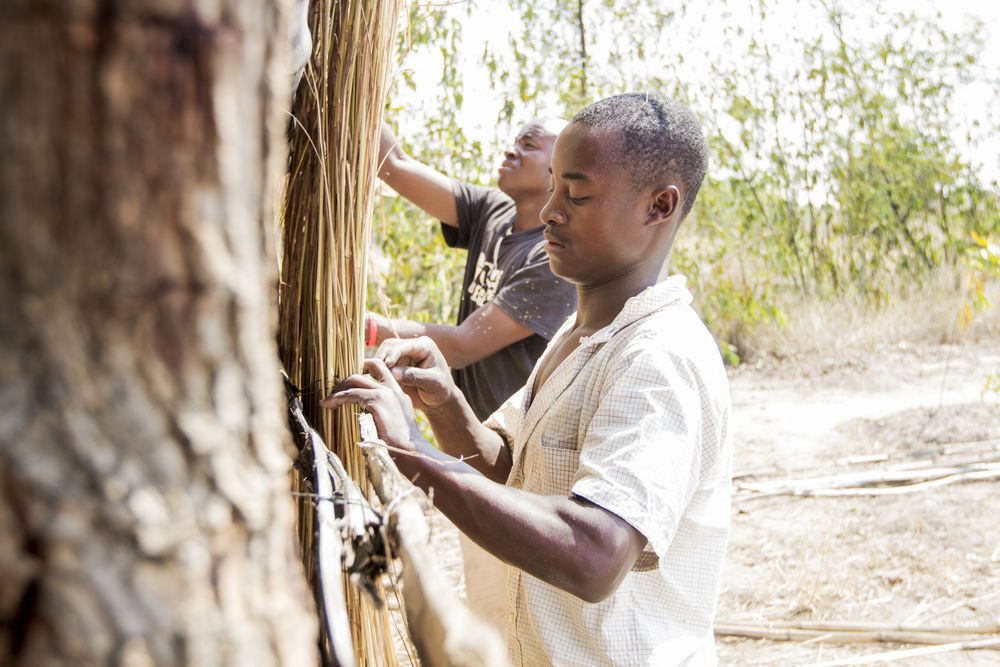 Malawi: OM workers Shadrick (front) and Francis help build a thatched structure in Ntaja, Malawi.
“We believe that the Gospel of Jesus can be preached without saying any words,” said OM worker Fredson. “But by doing, by showing love, by taking care of the old and by just being available to people.”

Community work ministry began in 2013 when one of the village Bible studies suggested they fix an old lady’s house that was starting to collapse.

Starting with that one lady’s house, the group helped move the bricks and put on the roof. Once that house was done, they started working on others, focusing on the elderly and others who are discriminated against.

The work does not go unnoticed in the communities and some people try to take advantage of the generosity, saying they are in dire need of help when they are not. By involving the Bible Study groups and the village chiefs, the team is able to see who really needs help and who does not; focusing on the elderly and those looked down upon in the community.

“We are not doing this in order to say ‘oh, we are doing community work,’” said Fredson. “We are doing this for the Gospel to be known to the people and for the people to know the truth. We are the fishers of men, going out and catching fish. To me, community work is like a net. We have different ministry nets so that we can catch more fish. In God’s kingdom you have different ways to reach out to people, I believe every ministry we have is to bring people to Christ.”

In January 2016 the team went to the community where Alice, the school cook, has a Bible Study. They decided to fix the roof of a woman who was mad. Talking to her children, they said it’s like an evil spirit takes her, and when that happens she runs away into the bush and stays there.

The first day the team worked they didn’t see the woman, but the second day she entered the house as they were working and sat quietly. One of her daughters said that she didn’t talk to people, only herself.

Finishing the roof they started talking to her and, to her family’s surprise, she answered their questions. She said that she could see evil spirits and they made her hate people until she couldn’t bear being around them any longer and retreated to the bush.

The team prayed over the woman and told her the Word of God could set her free. She said she believed, and accepted Jesus into her heart. After a week of prayer the woman no longer ran into the wilderness and experienced peace for the first time in a long time.

In the hearts of men

Friends of OM, Careson and Petunia, also use community work as a way to impact people’s lives.

Maliyamu, whose house was recently completed, said that as she watched her house being built she “knew that God doesn’t just live in heaven, but in the hearts of people.” Continuing she said she could see the love and mercy of God in the gift of a new house that He gave her through His people.

From a different background, Maliyamu realised that God is different from the god she knew in Islam, and continues to seek Him and His salvation through the Bible study in her village and by praying from the heart.

Praise God for the provision of people’s physical needs as well as spiritual ones! Pray for the wisdom for teams to determine who to help through acts of service. Pray for those who have received help to acknowledge the One who loves them and sends His people to help them.

Published: Wednesday, 31 August 2016
Credit: Rebecca Rempel
© 2016 OM International This email address is being protected from spambots. You need JavaScript enabled to view it.