A name with significance 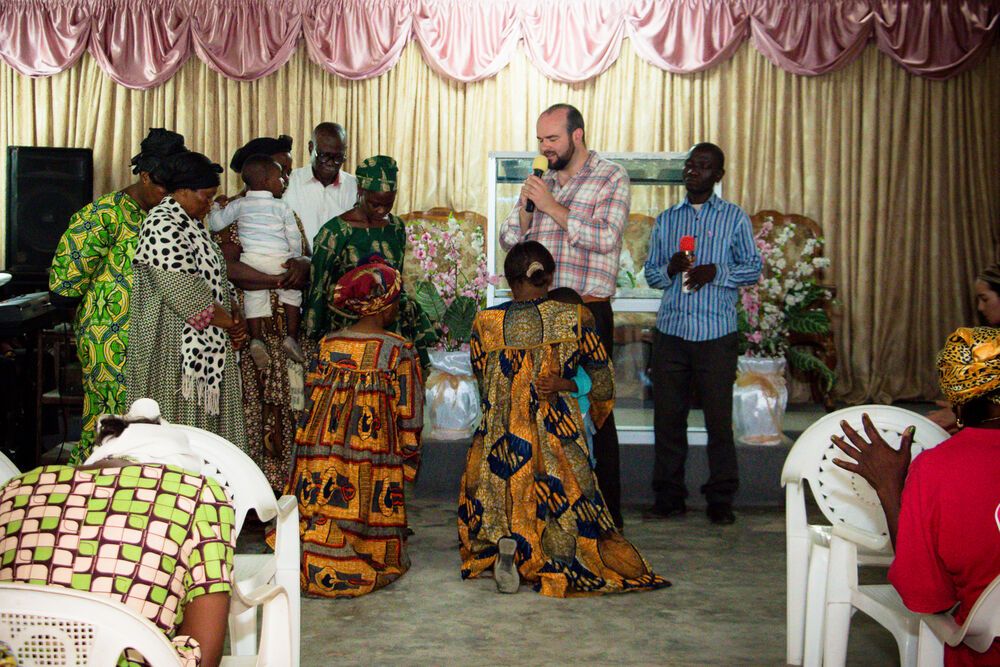 Cameroon: Douala, Cameroon :: Stu McQueen (UK) prays for six women who decided to follow Jesus.
Leading a midweek meeting at the Worldwide Missions Church looked like an opportunity for Logos Hope’s crew to inspire Cameroonian Christians, and link them with OM Africa’s vision to mobilise more missionaries from the continent.

But it turned out that, despite the church’s name, its congregation had had few opportunities to meet people from other countries. The connection to worldwide mission appeared unclear.

Six people from the ship’s diverse community told an eager audience about their homelands, which included China, the Caribbean, Northern Ireland and Colombia. Each volunteer explained their role in Logos Hope’s mission to bring knowledge, help and hope to all nations.

A mime set to music was performed, its theme pointing to Christ as the rescuer who triumphs over sinful influences which seek to destroy a person’s life.

The drama’s climax spoke volumes, without words. “It was clear the people really understood that Jesus paid the price for them on the cross—their cheers and applause as evil was defeated were fantastic,” said Quentin Simon (France), who played the lead role.

Annika Lee (USA) shared her struggle to fit in while growing up in China and how, ultimately, we only find our true identity in relationship with our heavenly Father. After hearing the Gospel message, six Cameroonian women came forward to accept Christ as Saviour.

A sense of joy and special connection made it hard to say goodbye to new sisters and brothers. The whole church took time to personally greet the team and wish blessings on Logos Hope’s ministry.

The pastor, Pierre Bambayi, told the group that his church’s name now had added significance. God had worked through the visit of six missionaries from all over the world, to touch the hearts of six ladies in Douala’s Worldwide Mission Church.

Published: Friday, 26 August 2016
Credit: OM International
© 2016 OM International This email address is being protected from spambots. You need JavaScript enabled to view it.