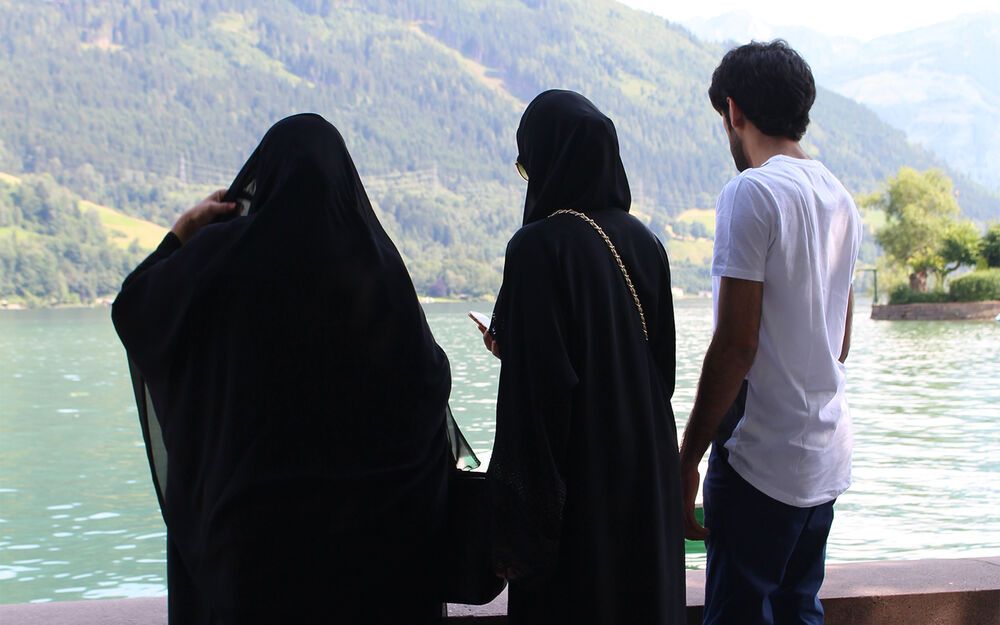 Austria: Many people from the Arabian Peninsula come to visit Zel am See in Austria.
What makes the ‘Salamu Aleikum’ outreach so special?

In the countries on the Arabian Peninsula, to talk about Jesus, the Bible or to give Muslims literature about Christianity is only done at great risk. In some of these countries, it is even against the law to own a Bible.

The Salamu Aleikum outreach is a completely different experience. It is an opportunity for an OM team to share their own experience of the risen Lord Jesus with people from Saudi Arabia, the UAE, and Kuwait, in complete freedom. And they are even able to give them an Arabic New Testament or SD card for their computer or smart phone; full of Christian literature and films.

For the 24 participants on this year’s outreach in Zell am See, Austria from 4th-13th July 2016, each day began with prayer, sharing and training sessions on the Arabic culture and leading everyday conversations with Muslims. In the evenings, they headed out in groups of four, two people who had conversations and two people to pray, who kept the conversation in sight, whilst praying for the encounters throughout the evening.

This year, the team was joined by some experienced brothers and sisters who are serving in Arab countries. Other participants came from the USA, Great Britain, Switzerland and Austria. For the first time, this year there were some musicians on the team, to try and reach Gulf Arabs through classical music. In the six days of outreach, there were spiritual conversations with around 300 Arabs, and more than 80 New Testaments and more than 130 SD cards were given out.

Experiences of the participants:

Someone from the same town

Fritz* shares: "Humanly speaking it was not such a great day. But then my partner and I prayed, that the Lord would lead us to someone who was frustrated with life. Not only that, but also to someone from a town in which we serve! And God really did lead us to such a person! We got into conversation with the man, and talked to him about faith and gave him an SD card. He was very open and seemed to be a person of peace. I hope that I am able to get in contact with him when I get back to my country. I am still praising God for this man from “my town” because in the whole 10 days, he was the only man that anyone from our whole team met from this town!"

Going a little way together

Peter* shares: "My partner and I saw two young men in front of us, who were slowly heading along the lakeside, away from the town. We decided that if they stopped in the next 50m, we would speak to them. Less than 5 seconds later, they stopped to take a photo. “It is a really a beautiful view, isn’t it?” I said to them. They were very pleased to be spoken to. So we went for a walk with them.

Saeed and Amir were both from the United Arab Emirates. Soon we were talking about fasting and after walking for about half an hour, we had covered many more topics: from sin, forgiveness through blood sacrifice, Jesus as the final sacrifice to our assurance of acceptance by God. They seemed to absorb everything we were saying and asked many questions.

By the time we arrived in the next small town, we decided it was time to say our farewell. It came as a surprise when they then told us, that they also had to head back to their hotel in Zell am See! We had both, in wanting to be polite, accompanied each other to a place neither of us wanted to go!

On our way back, we answered their questions on the reliability of the Bible and my partner shared his testimony with them. Finally it was time to part, and they thanked us, saying how happy they were to have met us, and how thankful they were that we had explained our faith to them."

Marion* from one of the prayer teams wrote the following about this encounter: "I work on the Arabian Peninsula, and even if I always had many chances to get into conversation, I really enjoyed it to be able to pray for others in Zell am See. Once we were praying for our brothers as they were walking along the promenade. They were walking for over half an hour. As we were following them from a distance and praying for them, I saw this wonderful picture, of Jesus walking with us and leading us into the Kingdom of God. It was a really special prayer time."

Beate*: "After our three musicians had played for a while, my partner and I wanted to speak to a couple which had been watching us for the whole time. We greeted them and welcomed them to Austria. We quickly got into conversation and asked them if they had children. They answered that they had a seven year old boy, who was currently playing in the park.

The husband, who was from Riyadh then directly asked us if we would pray for them to have another child. They were happy for us to pray there and then on the spot in the name of Jesus. They were very moved by this short prayer. The woman seemed to look at me very directly in the eyes. I felt this special connection to her, and as they eventually headed away from the place where we were sitting and playing, I gestured to her that we would pray for them and that everything would work out well for them. I really believe that they will have another child and that they will recognize that Jesus was the one who did this in their lives! Please pray that they will both get to know their savior!"

Karin*: "We were strolling past a mother and her three daughters. I smiled at her and greeted her in Arabic. As I did so, she jumped up and threw herself into my arms. She was so overwhelmed that someone had been so friendly to her in Austria. Normally she was ignored. After chatting for half an hour on the park bench, she invited us for a coffee in the Grand Hotel. There we were able to explain the whole plan of salvation and give our testimony. She listened intently. After she had heard the many stories of the blood sacrifice and the fulfillment of all of this in Jesus, the woman spoke up: “Aha, so it’s all about the blood.” At the end, she gladly accepted a new Testament and an SD card."

Published: Thursday, 03 November 2016
Credit: OM International
© 2016 OM International This email address is being protected from spambots. You need JavaScript enabled to view it.