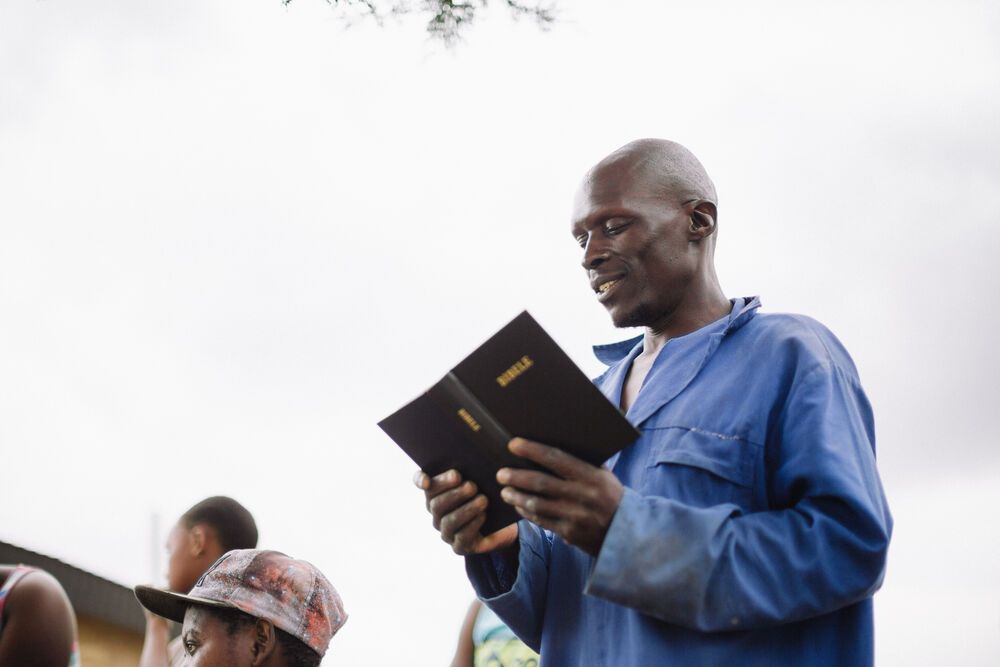 Lesotho: A Lesotho man reads publically from the Bible.
Lesotho is not a land where Christianity is unknown or the Bible beyond reach. A high percentage of its people would claim some sort of cultural attachment to the gospel, yet deep within that is mixed with ancestor worship and a general disconnect between belief and action. Their spiritual leaders aggressively discourage ordinary people from reading God’s Word. Is it any wonder, then, that the ability to envision a different kind of spiritual reality is a dream? How can such barriers be overcome?

For OMers Michael and Renee Exall, no other foundation for success is possible except to let the Word of God bring light and truth into the culture. They have created a new path open to all in remote villages across the north of the country, a weekly ‘church’ set in a neutral location where anyone can ask what the Bible says on any topic whatsoever. Called Questions & Answers, people submit questions and have them answered the following week. This gives the leaders time to study and pray together, serving as a discipleship opportunity in which South Africans train local believers for this ministry. Up to 50 people attend each Friday afternoon meeting which lasts for several hours, and the results are encouraging.

The most common issue is that of ancestor worship, which is soaked into the culture and worldview. It acts as a deterrent to change, whether to give up destructive practices, or leave an area for better job prospects, or for justifying unwillingness to work hard—‘following my father’s path’ is an all-purpose excuse. However, this generation is feeling the tension of colliding new and old ways. One village chief asked after a session on the topic, “Why have we been so foolish to believe in something that the Bible condemns?”

Consider the testimonies of those who have benefitted from the Q & A ministry:

• In 2014, Paul Sekelemane began attending Q & A when he heard Mike claim that only the Bible has real answers to life issues. Paul ran a small shop selling snacks and drinks; up to 70 per cent of his profits came from alcohol and tobacco. Unsure whether selling these was right for a Christian, he decided through a Q & A group that although there is no direct prohibition, the greater principle of seeking the welfare of your neighbour meant that he should stop, since alcohol caused many fights and domestic problems. But how would he replace that income?

Paul took a step of faith and stopped the sales—and then doors began to open. He formed a ‘scheme’ with two others (a type of crowdfunding) where they together contributed funds to empower one another with good business prospects. With that seed money, he imported used clothing much in demand in villages and highly profitable for him. He then bought a chainsaw to provide a service to others in need. He also raised chickens (broilers) for sale and is pursuing other ideas, while earning a good reputation in the area. He thanks God that his participation in Q & A gave him courage to take a step of faith.

• Masefa Thabo describes Q &A as “life-changing”. She came to Christ years ago, but had carried an unforgiving spirit, which only added to feelings of guilt. When she heard the white man (Michael) speaking on forgiveness, she was convicted: How did he know I had this problem? She realized that other people are hindered or helped in trusting Christ by observing our own lives. She credits Q & A in helping her to break free.

•A leader in the ‘12 apostles’ church (a cult claiming that the Bible is only written in our hearts and engaging in evil practices) read the Bible for the first time in Q & A. He came to Christ, left his former church and serves in another evangelical fellowship. The Q & A ministry does not pressure people to do so, but this often happens. Rather than rejoicing in the spiritual growth of their parishioners, some manipulative pastors feel threatened when anyone challenges their interpretation of the Bible.

• Moepanyane Thabo (Bennett) is the chief of Phelandaba village and sees positive impact from the ministry: A number of villagers have come to Christ and some have been healed. Crime has decreased as the number of Christians grows. The chief invites everyone to attend and see the Bible’s power to change lives. Q & A is a discipleship ministry meant to build up churches. The area’s largest village of Maseru (1,000 inhabitants) has no church, and a new Q & A group will lead to the forming of a church there.

• Sechaba Motsoel (Innocent) has attended Q & A faithfully for a long time. He finds the format more interactive than a Sunday sermon. “You can read the Bible alone, but God can speak to you through others, too,” he notes. “One person’s question can often ring true for everyone else. This form of Bible study brings humility as you realise how little you know! We’re not here to express our opinions, but to search together for answers in His Word.” He adds that the exercise and discipline needed to accurately answer others’ questions causes personal growth. In any society, you will find people who do not recognize the Bible’s authority; however, follow-up and kindness changes hearts.

Several other villages are waiting to launch the Q & A ministry, but more trained workers are needed. Germans Stephan and Christina Schmidt and family plan to move to the area next year.

Published: Thursday, 20 October 2016
Credit: OM International
© 2016 OM International This email address is being protected from spambots. You need JavaScript enabled to view it.

The coronavirus has opened up doors to share the good news in the small mountainous country of Lesotho.