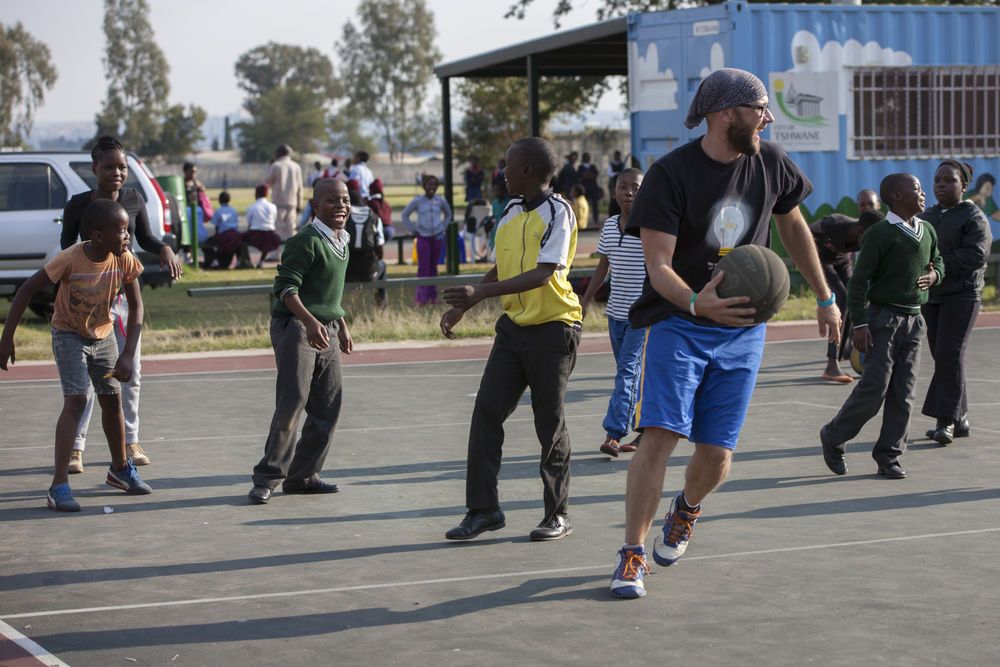 South Africa: Jan Willem Otten plays basketball with underprivileged children in Mamelodi, South Africa.
On a crowded sports field in an impoverished area outside of Pretoria, a tall Dutchman named Jan Willem Otten rounds up a group of young South Africans to play basketball.  Otten is  part of the SportsLink team aimed at keeping at-risk youth off the streets while teaching them valuable life-lessons on and off the court.

“On Monday, Wednesday, and Thursday I do ‘coaching for life basketball,’” Otten shares.  “I do it when I have a chance in the game, like about being honest and linking it to the Bible. Or, if you want to learn to shoot, you have to have perseverance, and what does the Bible say about perseverance?”

Every Monday he holds a short meditation for a team that he coaches of boys ages 15 to 20.

The call to go

Back in the Netherlands, Otten and his wife both had good jobs as social workers. He was working with people with disabilities, while she worked as the coordinator of two Salvation Army houses.

However, they had always had cross-cultural missions in their hearts. One day, his wife opened her laptop and saw a website saying, “South Africa: come and help the children.”  She told God, “I’ll go, but only if [Jan Willem] goes.”  Soon after, the Lord began drawing him to South Africa as well.

During their vision trip, the team in South Africa took them to the mall on the weekend to help them feel at home, but the couple felt like the mall was not their place. Then the team brought them to the soccer and basketball fields in Mamelodi.

“The moment we stepped on this field, we new this was it,” Jan Willem remembers.

For the past nine months, he has been working with the basketball program as well as a project with disabled people in the north, while his wife helps him and also does creative Bible study with painting and singing with the ArtBeat team in Pretoria. She has a heart for the children, and also mentors two girls.

When Jan Willem first began his basketball program, some of the other coaches were not happy about him sharing the good news with the kids. They told him “lifeskills—yes!”, “gospel—no. We don’t do that here.” However, the longer he is around, he prays they will begin to accept him. Some of the coaches have even invited him to play with them after the younger kids go home.

His main goal with the sports ministry is to keep kids off the street and in touch with the gospel.

“What gets me passionate is, there are now guys here that used to sit [on the corner] selling drugs,” he explains. “Since I came playing, they’re coming to the field instead.”

One of the older boys is very faithful in coming and Jan Willem has had openings to share the gospel with him.

A few months ago Jan Willem shared, “yesterday it was Pentecost, do you know what that is?” The boy had no clue, so Jan Willem went on to share about the resurrection of Christ.

“With him it’s easier because we have been in touch for a longer time,” he said.  “A relationship is key here.”

“I feel blessed to do this,” he shares. “When I was young, my dream was playing in the NBA. I never stood a chance, but now basketball is my work. That’s a humour thing of God I think. ‘I won’t give you the NBA, but I will give you basketball.’”

Jan Willem hopes that a few new trainees will join him soon so that one could sit on the bench and talk with the kids while the other coaches.  There is a need for both basketball and football coaches for the program.

Pray for the Lord to raise up workers for his harvest. Pray also for the kids that they would not be seduced by selling drugs but would continue to find healthy outlets to stay out of trouble.

Published: Wednesday, 14 September 2016
Credit: Megan R.
© 2016 OM International This email address is being protected from spambots. You need JavaScript enabled to view it.