The miracle of a family meal 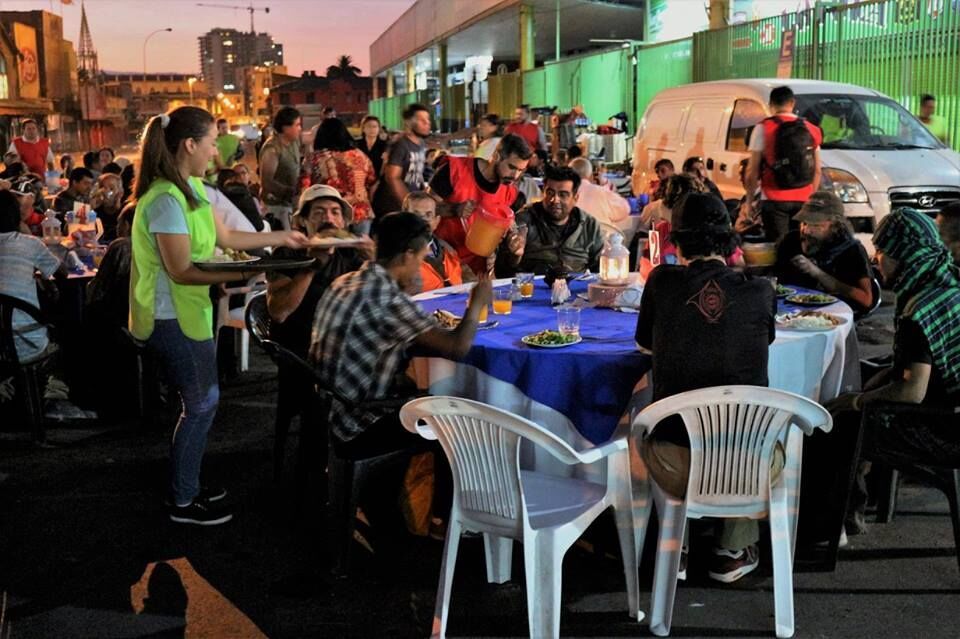 Chile: Once a month the OM Chile team (with the help of local churches) feeds the homeless of Santiago a hot sit-down meal out in the middle of the local street market. Every month about 100 men and women are treated with dignity as they are fed with physical and spiritual food.
Jessie Stein from the USA is serving with OM Chile in Santiago for 2 years. She manages and coordinates communications for OM Chile and also ministers to the homeless people of Santiago. Jessie shares a story about Gods faithfulness:

Once a month, on a Saturday night, the OM homeless ministry team and I (with about 20 other volunteers) go out to La Vega in Santiago, a huge street market, and put on “The Meal of Love”, a ministry where homeless people are given a formal dinner. It’s one of my favourite parts about my job working with the homeless of Santiago.

This particular Meal of Love was the third one I was involved in. As I look back and compare my Spanish from my first Meal of Love to the last one I can really see how God has answered my prayer of learning the language. The first two and a half months were so difficult. Everything took twice as long because translation was needed and I constantly felt discouraged for not being able to communicate.

The first time I participated in The Meal of Love I needed translation to even understand my boss’ instructions. I knew that I wouldn’t be able to talk to the homeless people so I spent the night walking around La Vega praying for the people from a distance.

The second time I was able to understand all of the instructions, but I really struggled to communicate with the people. My boss challenged me by making me a waitress. I couldn’t speak much, but I was able to serve. At one point a man called me over and asked me to listen to his story and to pray with him. He spoke slowly and used simple words, and I understood that his son and he hadn’t spoken in years. I prayed for him and his son in English before going back and serve food.

This month’s Meal of Love I was working in the kitchen. As I was walking around checking to see if every table had food, I spotted the man that I had prayed with last month. When he saw me he ran to me and hugged me, and could not stop thanking me. “For what?” I asked.

His son came over to me and introduced himself. We began talking and he told me his story. He shared that this was the first time in years that he had spent time with his father. After spending a lot of time with the son and his overjoyed father, they asked if we could all pray together again. This time I was able to pray in Spanish and it was no longer just with a lonely father, but with a united family.

God has the power give me confidence in a foreign language and to put families back together, in the midst of seemingly impossible situations.

Published: Tuesday, 18 October 2016
Credit: Jessie Stein
© 2016 OM International This email address is being protected from spambots. You need JavaScript enabled to view it.

A girl from the Netherlands comes to OM Chile with passion to do evangelism. Instead, she gains a true appreciation for mobilisation.