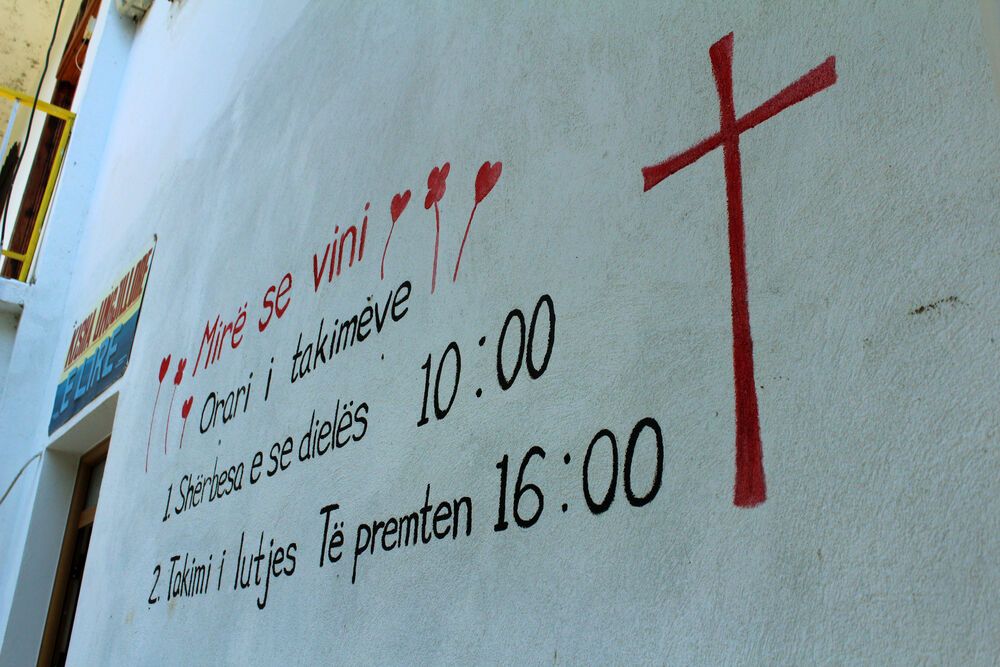 Albania: An OM church plant in Polican, Albania.
“God loves Albania.” The Dutch-tinged overtones of Brother Andrew rang out across the stadium in Tirana, most of us weeping as thousands of Albanians responded to his words with a huge roar of emotion.

For more than 45 years, Albania had been one of the most closed—and poorest—countries in Europe. Christians prayed for ways to share the gospel, but doors remained obstinately shut. One of OM’s creative projects involved floating parcels of tracts into Albania as an OM ship sailed up the coast. We later found some of these tracts in the Museum of Atheism and Religion in Tirana, as an example of the attempts by imperialist Western governments to corrupt Albanians.

But on this day in June 1991, a small team of us listened as, for the first time in generations, Brother Andrew openly shared the gospel. The response was incredible: All week, our team was surrounded by Albanians full of questions: “Does God love Albania? Does God remember Albania? Does God really love us?” It was genuinely transformational: At the end of the week, on 7 July, 43 Albanians were baptised in Lake Tirana. What had been a lake at the heart of a country bathed in Communism and atheism, became the birthplace of the modern Albanian church. Men and women rose from the baptismal waters with faith in Christ—and little else. No church buildings awaited their worship, no songs existed in modern Albanian, few Bibles were available. Yet a new era dawned, full of promise and excitement.

First on the ground

Last year, OM celebrated 25 years of The Disciples Church in Durres, one of many churches borne out of the early years of openness. A South African OM worker, Pranesh Anandlal, was the team leader and the first pastor of that church.

“Our team of five first went in-country in November 1991. Our excitement was rapidly followed by stunned silence: The extreme poverty was unbelievable. Durres then had a population of 60,000, and there were only eight cars in the whole city. People had nothing. There was so little food. We were the first group of foreigners to come and live in Durres, and they didn’t know how to respond to us.”

The team started with three goals: to learn the language, start Bible study groups and learn the culture. Within the first four weeks, the team had led four to five people to the Lord, says Pranesh, so on 25 December, they invited everyone they knew to their first Christmas meeting in Durres.

“We spoke very little Albanian, so we used a translator,” remembers Pranesh. “There were maybe 50 people there. I opened in prayer. Halfway through, the translator nudged me: ‘I think at first you should explain whom you are talking to. These people have no understanding of God.’ The Albanians then had literally no idea about God.”

During that first meeting, a girl named Oneida heard singing in English, walked in and sat at the back. At the end, the team gave everyone a gift—the only portion of the Bible in modern Albanian, the Gospel of John. Oneida took it, went home and read it. Later, she met Anthea, a team member; she had questions about what she had read. “How can God be my father? My father is dead.” Anthea explained about her heavenly father and led her to the Lord.

From that time, the team and new believers met on Sundays, and the church grew from five believers to 150 within three years. “It is still going strong to this day,” reports Pranesh.

Sing praises of God to Albania

In spring 1992, Pranesh and the team were invited to an Albanian wedding. “The bride wanted the foreigners to join their celebration, so we carried our guitar in case they asked us to sing.” And they did; afterwards the mother of the bride began to cry, explaining, “When I was a young girl, I had a vision or a dream that one day a group of foreigners would come and sing the praises of God to Albania,” says Pranesh. “We led her to the Lord, along with her husband. While she has now gone to be with the Lord, her husband is still a deacon in the church in Albania.

“God gave us a unique window of opportunity in Albania. We had about five years until things changed,” continues Pranesh. “If we hadn’t taken it, we would have missed it. But because OM was creative, flexible and available, God used us. We were in the right place at the right time. There was no set plan to reach Albania, yet the churches we planted are still flourishing. Are we thus ready to be used by God today?”

Katherine and her husband, Lloyd, have served with OM for 26 years. Six years helping to establish teams in Eastern Europe after the fall of communism paved the way for 11 years as field leaders in Russia. In 2007, they and their two daughters moved to Western Australia, recruiting and sending people to serve across the OM world. Katherine is currently the Director of OM Global Organisational Development.

Published: Monday, 13 March 2017
Credit: Katherine Porter
© 2017 OM International This email address is being protected from spambots. You need JavaScript enabled to view it.

The journey of a young Albanian girl from the Roma and Gypsy community who went from being a troubled teenager to excitedly following Jesus!

Whitney, a talented singer and musician from the US, is using her skills to show God’s love and spread His glory through teaching Albanian musicians.