The catalyst of two new believers 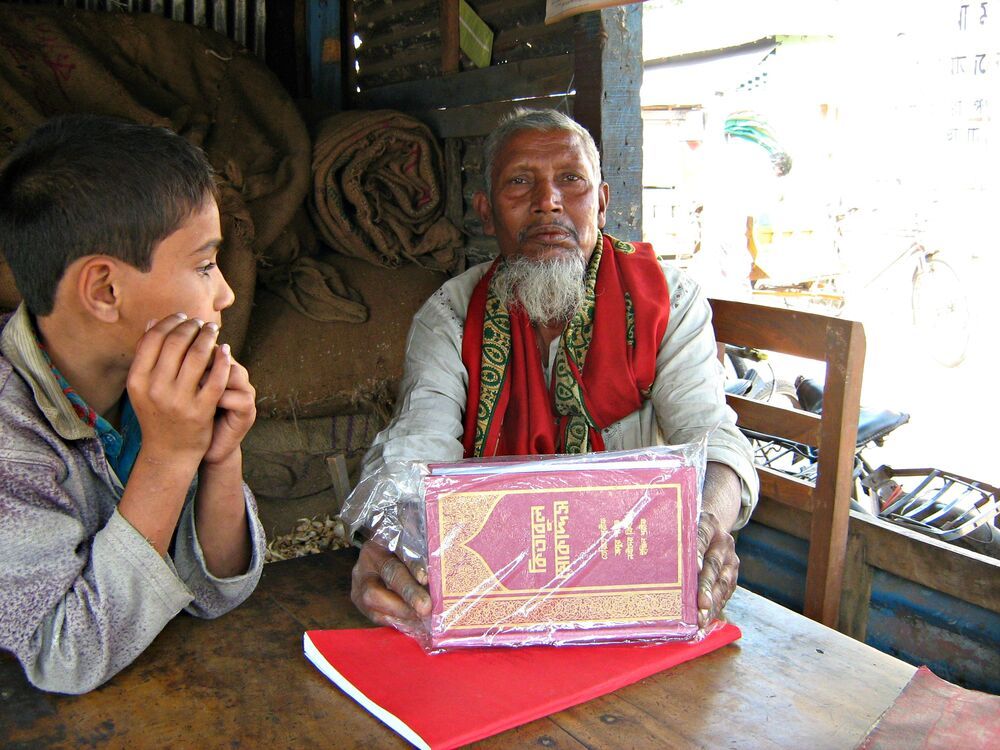 Bangladesh: An elderly man in a Bangladesh shop with a Bengali Bible he bought. Throughout Bangladesh Gods Word is reaching people who have never heard about Jesus.
In 1971, during Bangladesh’s liberation war, millions of Hindus, Christians and Muslims took shelter in India. OM teams began relief work among those who fled. They also gathered Christians together to encourage, teach and disciple them. Many people came to a genuine personal faith in Jesus.

After the war, when people returned home to the newly birthed country of Bangladesh (formerly East Pakistan), leaders of the refugee work followed, bringing together young people who had become Christians to start the first OM teams. From the very beginning, OM in Bangladesh was made up largely of nationals.

In 1976, a well-known international mission, CIF*, had been working in the Jewelpur area for 17 years with very few results. At that time, Bangladesh was still a new country, only five years old. During the war in 1971, the minority Hindu population suffered greatly. Many mission experts suggested it was time to concentrate on this Hindu minority to give them opportunity to respond to the liberating good news of Jesus. The international workers with CIF asked OM to provide a national team of co-workers for one year to reach the Hindu population; if there were no response, they would move to a new part of the country.

Four Bangladeshi OMers began work in Jewelpur District. As required, during the daytime they reached out to Hindus. However, on the team was a young man named Abel, a believer from a Muslim background. In the evening, in the area where the team was living, Abel began building relationships with Muslims, not only young people but older working men who had their own families.

Eventually two men, Tab, a farmer, and Yacob, a milk seller, declared that they wanted to follow Jesus. The OMers were, of course, thrilled, but those from CIF were amazed. “We were told we should be reaching Hindus,” they said, “but really we came to Bangladesh to reach Muslims.”

Over the next five years, the whole of CIF transitioned to a total focus on Bangladesh’s 90 per cent-Muslim majority. OM also began to refine all of its literature and its methods of outreach for effectiveness amongst the majority population and, in 1981, began its own local church planting teams.

When Yacob and Tab came to faith in Jesus, it was the start of a difficult journey. They understood who Jesus is, but the community around them was very unhappy. Eventually, they and other believers were brought together for a village judgment. The local people wanted to burn down their homes. At the height of the tension-filled meeting, a crazy man rushed into the middle and shouted, “Leave these men alone—they are God-people.”

The local people feared whatever spiritual power might be in this crazy man and immediately their attitude changed; Yacob and Tab were allowed to leave with only a fine. Later on, Tab was elected as leader of a local group that practised a form of mysticism. In that position, he was able to share that Jesus filled all of the hopes and desires of human beings, including those who try to reach God through various mystical practices. Over the years, hundreds were baptised.

Abel, who had led Yacob and Tab to faith, was the first person to join the new OM team. A cutting-edge evangelist, Abel also needed coaching and discipleship. Mike (UK) spent hours with Abel, teaching him, challenging him, correcting him, being patient with him and fathering him.

Without Mike, there would have been no Abel. It is the same today: Young Bangladesh believers need those who will love them, care for them and teach them so that they can become God’s agents in society.

Yacob died several years ago. Tab is now 85, a venerable old man in his community who has led several hundred other people to faith in Jesus. One of his sons is a Christian outreach worker. That key moment in 1976 in Jewelpur—when Tab and Yacob decided to follow Jesus—has cascaded in the training of dozens of new outreach workers who have spread out to many parts of the country.

Today many congregations of Muslim-background believers in Bangladesh owe their existence to that moment in 1976, although few would know about it.

Published: Saturday, 21 January 2017
Credit: OM International
© 2017 OM International This email address is being protected from spambots. You need JavaScript enabled to view it.