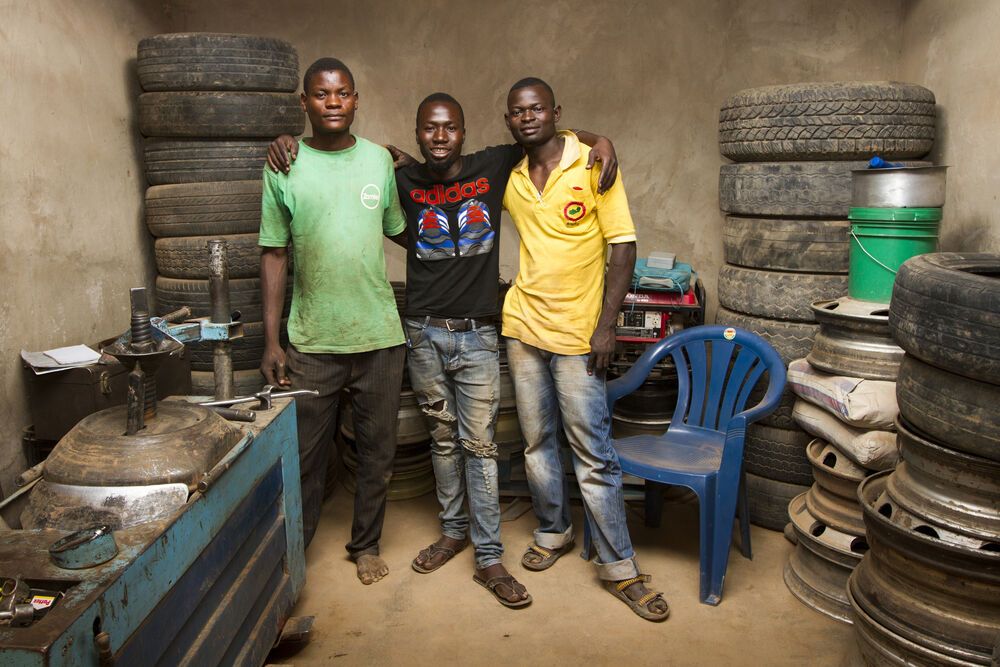 Zambia: Brian, centre, stands in the middle of his mechanic shop with the two men he is discipling and training. Brian was discipled at the OM base in Mpulungu and encouraged and empowered to go to technical school after graduation. Having experienced the value of being discipled, Brian is in turn discipling others.
Five years ago, seven boys were chosen to be discipled as the “Honest Boys” by Lake Tanganyika Field Leader Christopher Kasale.

The name Honest Boys was picked to instill in each member a value for honesty—something Christopher admits he struggled with as a young boy.

Some of the boys have lost one or both parents, some still have parents, but all were considered vulnerable.

Through the Honest Boys they learned many things including football skills, how to coach, farm, make handcrafts, handle finances, lead a Discovery Bible Study (DBS) and uphold Christian values.

Five years is a long time and those seven boys are now seven young men who are discipling other boys whose situations resemble their own pasts.

Living in Kapembwa, a large fishing village along the lake, Dennis dropped out of school at an early age, telling himself that he would never go back. He loitered around the village, thinking he was stuck there.

When visiting his cousin at the OM base in Mpulungu, Dennis got connected with the boys and Christopher, who invited him to stay and be discipled.

Moving to Mpulungu, Dennis was encouraged to think about going back to school. Using the handcraft skills he learned, particularly carving, Dennis began saving money. Once Christopher saw that Dennis was committed to getting an education he helped him with the school fees.

Now in grade 11, Dennis is one of the oldest students in the class at 22 years old, but doesn’t let that get him down. He is passionate about developing others and is a role model for the other students. Many of his teachers have asked Dennis why he is different. The answer: Jesus.

Dennis has also taken up leadership at Kids Church on the farm plot. Kids Church a church that is reaching out to children on their level. The church strives to develop leaders from a young age and Dennis is helping the kids step by step develop their identity in Christ.

Not sure what he wants to do in the future yet, Dennis has thought about becoming a soldier so he can help people in need.

Kennedy, a relative of Lorrin, Christopher’s wife, was found by the Kasales nine years ago in a shanty compound just outside of Kabwe when they still lived there.

Drinking, smoking, fighting and sleeping on the streets, Kennedy was a boy with no hope who had been told he would never amount to anything in life.

Believing differently, the Kasales took him in; though initially he kept returning to the streets. Fetching him back, they would encourage and pray for him, and gradually Kennedy changed.

When the Kasales relocated to Mpulungu, Kennedy found that there were many vulnerable boys and took charge; encouraging and reminding them that he had been just like them but now had hope.

After the Honest Boys group was created Kennedy became the leader of the team and has helped many boys grow spiritually, mentally and physically.

After completing high school, Kennedy applied for mechanic school. He passed the entry exam and went for an interview and he was accepted and began the one-year course in January 2016.

Though away from the lake, Kennedy has taken all he has learned with him.

“It’s a lifestyle now,” Christopher explained. “Even at school he has got a group that he is discipling.”

Already in high school when the Kasales moved to the lake, Brian had gotten to know other boys on the base.

Though too old to fit in with the Honest Boys, Brian still learned their values and was discipled by Christopher.

“I learned discipleship and servanthood are important,” said Brian. “Being humble, loyal, respecting people, all those things I learned from being at the base.”

After graduation Brian went to technical school where he studied to become a mechanic before returning to Mpulungu to set up his business. Brian’s father died when he was young and since then he has been responsible for his mother and younger brother and sister. This burden would have made it impossible for him to study further after high school. However, because of his relationship with the OMers they, and other supporters, sponsored him to go to mechanic school and provided the startup money for his business.

Brian’s vision was to set up a mechanic shop where boys could come to his workshop to help him and be discipled as they work.

So that’s what he did.

Though it didn’t end up being boys that he trained, but instead three men in their late 20’s who all have families but no training.

Building up relationships with each of them, Brian leads by example; demonstrating Christian values in the way he treats his customers and runs his business.

“My shop is very different from the other shops. All the mechanics are on the same road, facing each other, but because of our attitude, the love that we show, the customers feel the difference,” said Brian.

Brian dreams of one day expanding the shop; both in services offered and worker capacity. In the meantime he is able to pay school fees for his brother and sister and take care of his mother.

“I need it to grow bigger to help more people,” Brian explained. “People come to me and ask for work, those who just graduated or come from the villages; they need to be helped.”

Today, three generations of Honest Boys are changing and challenging the young people of Mpulungu, and beyond.

Though they may not actually be boys anymore, they still carry the title of “Honest Boy” proudly and seek for others to follow suit.

“I feel so encouraged (looking at where the Honest Boys are now). It motivates me, pushes me and I want to do more,” Christopher said. “I want to see the oldest ones married and leading Godly families.”

Published: Thursday, 08 December 2016
Credit: Rebecca Rempel
© 2016 OM International This email address is being protected from spambots. You need JavaScript enabled to view it.

Anne follows God's leading to care for the vulnerable children in Zambia.