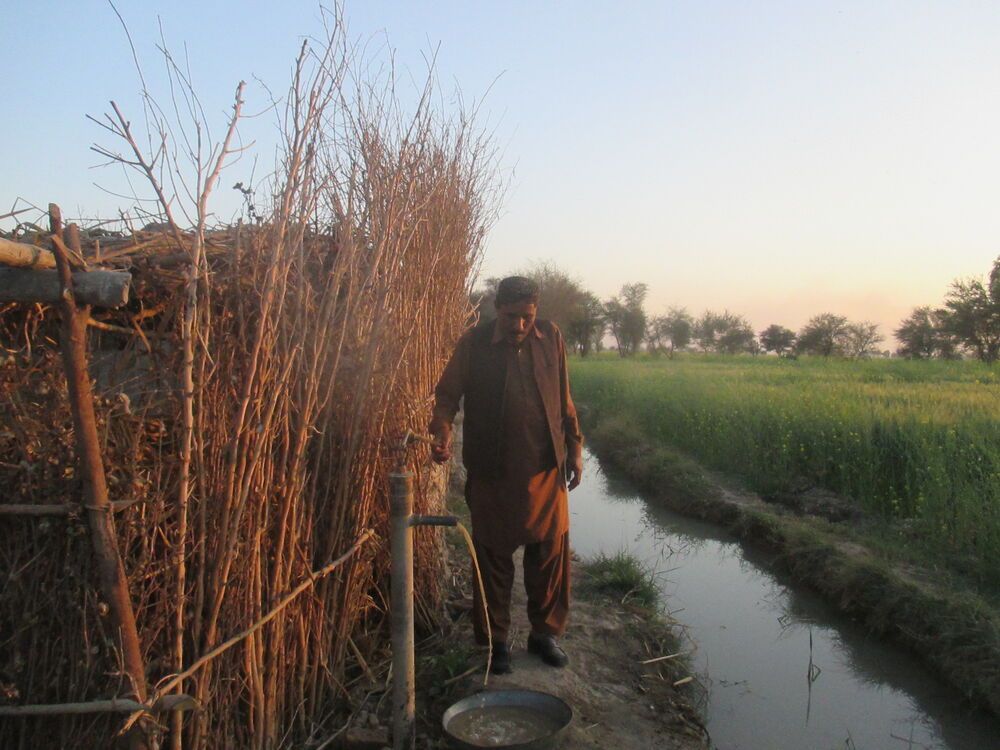 Pakistan: A man taking water from a hand pump
Since its beginning in Pakistan in 1979, OM's philosophy of evangelism embodied a somewhat direct approach. Mass distribution of literature and sharing of one's faith door to door were the norm. Fearful and feeling less capable, many Pakistani churches preferred to appreciate OM from a distance, following up after OM made initial contact.

In 2003, OM recruited an indigenous leader to work among the unreached people groups in Sindh province. With a new strategic plan and four team members studying language and culture, OM's work in Sindh province was ready to move forward.

This team decided to start a grocery store in a central location that gave access to five other cities and villages. Leaders from other missions had never found success there. OMers heard that darkness prevailed due to the large number of religious shrines and tombs of mystic Islamists. They were told that this province was cursed.

Qasim, a Punjabi, recalls his early days in team ministry: "While learning the language and culture, I found Sindhi are loving and hospitable, but also fierce avengers; tribal wars can last many generations. But quickly I found Sindhis also have a thirst for the Word of God and are eager to learn about Christ. This helped me to continue.”

The grocery store initially gained a lot of local patronage but soon fell under suspicion. Between the bookrack of contextualised material for an adult literacy course in the back of the store and their evangelistic tendencies, the OM team seemed atypical businessmen. The team hired local believers to work there, yet profits failed to increase and the store had to close. As a result, the team had more time to meet with people.

Nadeem said, “It was embarrassing that we ran into deficit but, as we had more time to reach the Sindhis, I found God’s purpose. The closure helped us to focus on the work He wanted us to do. We saw amazing response from the people.”

The team developed its own correspondence course based on the Jesus film and advertised it in local newspapers. An overwhelming response led to new relationships with local seekers. The team also launched a health and hygiene initiative in remote villages, installing hand pumps to provide clean drinking water and toilets for less fortunate communities.

In one village, Nadeem met Ahmad who, during Nadeem’s next visit, indicated that he wanted to discuss a private matter—he had secretly completed a Bible correspondence course. This was a ‘wow’ moment for Nadeem. Together they started a series of secret meetings and, by 2010, Ahmad asked Nadeem to baptise him. Ahmad then volunteered in OM’s relief response to flood-damaged villages. Serving with OMers deepened Ahmad's faith. One Sunday morning, Ahmad and another brother were baptised in the Indus River. Ahmad’s face glowed. He said, “I am feeling amazing peace in my mind. I have rejected the curse of death from my life. I really want my family and tribesmen to have a similar experience.”

Later, Ahmad revealed to his family that he followed Isa Masih (Jesus the Anointed). This ignited a firestorm. His father and brothers opposed his faith. Nadeem urged Ahmad not to leave his house. So, Ahmad stayed, though he was beaten many times.

Ahmad’s mother was his only ally and protected him. On a winter evening in 2010, his father ordered him to leave; he could no longer tolerate an infidel in his home. Ahmad’s mother intervened. After hours of arguing, they resolved that Ahmad could stay, but not inside the home. So, Ahmad was forced to sleep on the roof through all four seasons. Yet he continued loving his family.

In April 2011, Ahmad’s father passed away and tensions at home subsided. OM helped Ahmad renovate his home later that year after more flooding. Through that, Ahmad got his own room. He was excited, relieved and motivated, starting a fellowship of his friends in this place.

In 2014, Ahmad went to the School of Mission, OM’s initiative to develop a new generation of missionaries. Upon completion he said, “There is a great harvest among unreached people groups but many are fearful and less equipped. I am hopeful that my ministry among my own tribe will save many souls.”

Qasim became the team leader in 2011 with the rise of the indigenous fellowships. Together Qasim and Ahmad are part of a team that have nine fellowships running in three cities. These fellowships have 100-plus believers and seekers involved.

Adnan and J. Paul serve separately with OM in Western and Central Asia with their families. They desire to see more people place their hope and faith in Christ, reaching the unreached through all possible creative means.

Published: Monday, 13 February 2017
Credit: Adnan & J.Paul
© 2017 OM International This email address is being protected from spambots. You need JavaScript enabled to view it.