Milestones and called off engagements 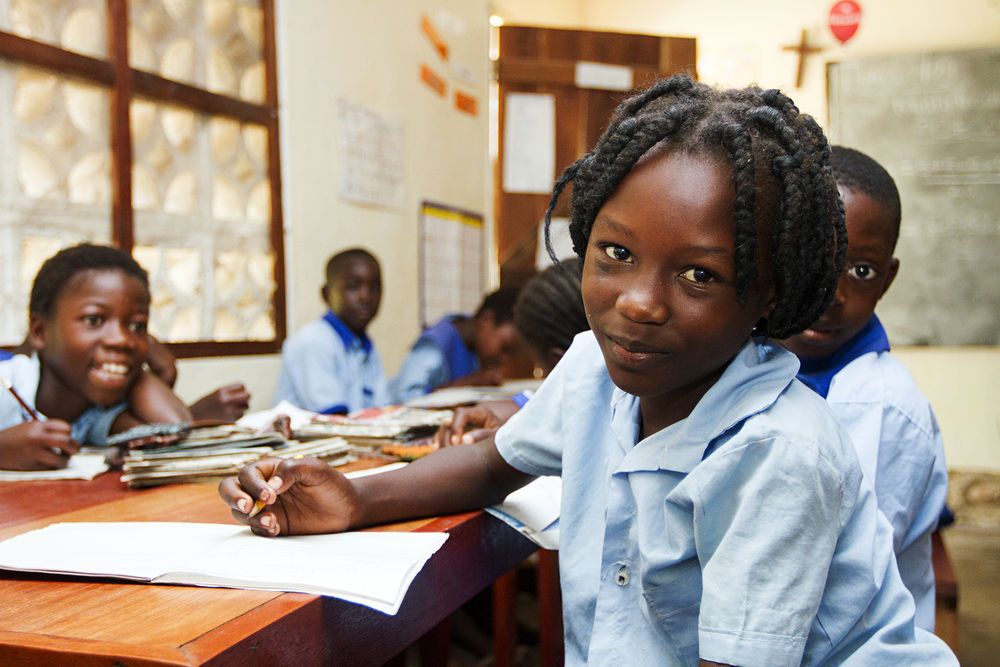 The noise of the lake fades away, people chattering on their way to town grow quiet, and even the birds seem to stop to listen.

The sound is children—clapping their hands, stomping their feet and raising their voices to praise the Lord.

OM's Good News II School for orphans and vulnerable children welcomed 188 students back to class this September – a huge growth from the 20 children the school started with back in 2008.

Some of the children are single orphans (having only one living parent) and some are double orphans; some have lost parents or family members due to HIV/AIDs. All are considered vulnerable.

The ten teachers at the Good News II School freely give their love and encouragement to the students; making the school a safe place to grow and learn.

This year marks a significant milestone in the school's history. Last December the grade six students wrote their exams and graduated from the Good News II School. Those students were the very first class in 2008 and will now further their education in the public school system.

“They are still part of us,” said Lorrin Kasale, who has been their teacher the longest. “We haven’t let them go.”

The grade seven students are welcome at the school for lunch everyday and are encouraged to visit their former teachers and share what is going on in their lives. Lorrin has seen how the students have continued to grow in the public school and carry the values they learnt at the Good News II School with them.

For instance, two of the boys who have gone on to government school went to their head teacher and informed him the chalkboard in their classroom was not well kept and needed to be cleaned so they could better understand what their teacher wrote on it. No student had ever done that before and the head teacher was surprised; not only that they had come to him, but by their humble attitudes and obvious desire to learn.

A different day they went to him to ask if they could lead devotions during assembly with all the students up to grade 12. The head teacher was very impressed by the boys’ leadership.

When the news made it back to their former teachers, they were encouraged.

“We were just thinking wow, we know that the students are still practicing what they learnt here, although it is not really common in the schools where they are,” said Lorrin.

Gladys started school when she was already 11, and as a result is just now in grade six but has a strong desire to learn.

Last term Gladys was forced to become engaged to a 21 year-old man in her community. He ran a small shop and the people surrounding Gladys told her she must be very smart and special for him to want to marry her and ignore all the other women.

Gladys said no, that she was too young and wanted to continue her education before getting married, but her mother said if Gladys refused she would be kicked out of the house.

One of Gladys’ friends heard about the situation and encouraged Gladys to talk her teachers, but Gladys was scared of what her mother would say if the school knew. The friend went and told Lorrin who immediately called Gladys for the whole story.

The man had paid 50 Kwacha (around $5 USD) to Gladys’ mother as part of the bride price and had been meeting with Gladys once in a while to talk. He had tried to sit close to Gladys and touch her but Gladys always said no and moved away. He continued to buy her small presents like lotions and candy.

Lorrin invited the mother to the school to talk where she initially denied what her daughter said but later admitted it was true.

The mother had initially been very persistent that her daughter attend school, so Lorrin asked her what had changed? The mother was stressed with the added responsibility of her nephew coming to live with them as well as the fact that her older daughter was pregnant and wouldn’t say who the father was. When the man had approached her about marrying her younger daughter she thought it would prevent Gladys from getting pregnant out of wedlock and that at least she would be well provided for.

Lorrin reminded the mother that Gladys was not ready to be married; she didn’t know how to be a wife or mother or do the cleaning and cooking that would be expected of her. The man would soon tire of her and leave her pregnant or just abandon her.

The mother agreed and together with Lorrin and Head Teacher Laban, went to the village headman to explain the situation. The man was called and they all talked together. The man didn’t really understand what was wrong with the situation, but said the engagement could be called off if the sum of the money he had spent on buying things for Gladys was returned. It was and they all parted ways.

Pray for Gladys as she continues her education and praise God for the friend who intervened and that the situation was worked out peacefully. Pray for the many girls along the lake who don’t have someone to stand up for them in these situations.

Published: Thursday, 16 February 2017
Credit: Rebecca Rempel
© 2017 OM International This email address is being protected from spambots. You need JavaScript enabled to view it.