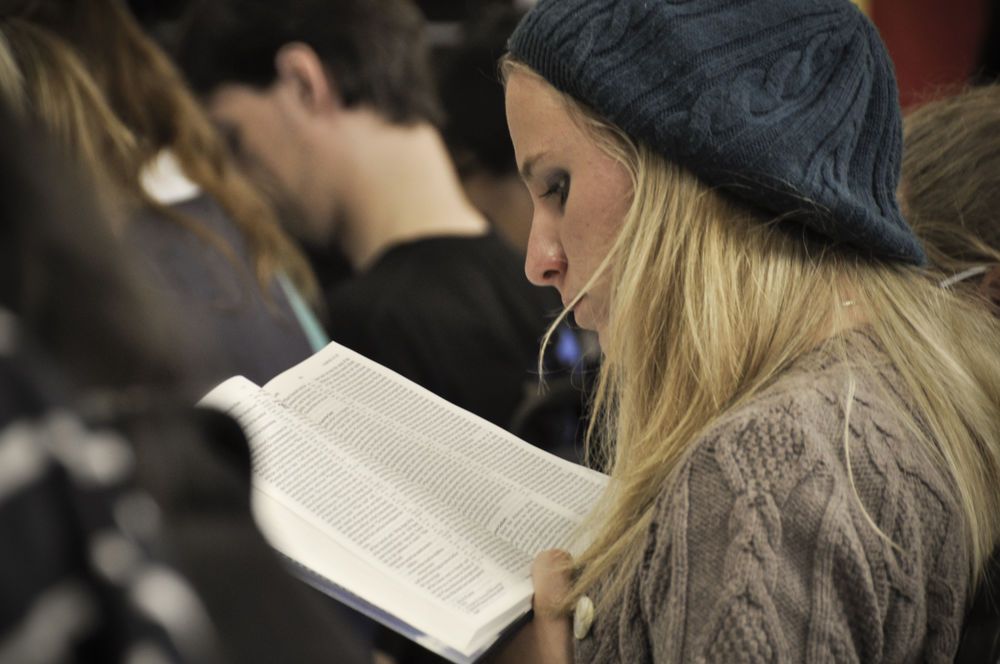 South Africa: Mission Discipleship Training participant reads the Bible.
Since its beginning, OM has provided training based on need. For young OMers, the road to longer-term commitment started with reading books and listening to teaching cassettes. Studying was obligatory for those joining OM summer campaigns that started with a one-week conference followed by three weeks of evangelism. For those joining year teams, training from two to four weeks was provided in various locations in Europe. Days were full with teaching on discipleship, leadership, teamwork, Bible study and prayer. Participants worked in small groups and were expected to do daily household chores together.

OM still equips newcomers with the same attitude, but with a slightly updated model. And with the growth of OM teams around the world, training has expanded to meet needs in various locations.

In the late 1980s, OM in South Africa discovered that a few candidates sent into service with OM needed to return home shortly after, often simply because they were ill-prepared for the challenges they faced. In an attempt to rectify this, Francois Vosloo, former leader of OM South Africa, proposed a six-month intensive orientation as a means to prepare and equip local recruits before they were sent to other OM fields.

Trainees would receive instruction in evangelism, ministry tools and leadership development, as well as learn how to live in a multi-cultural community and work successfully as a member of a team.

Initially, the idea of this training, called Missions Discipleship Training (MDT), was met with reluctance by international leadership; however, the positive results were hard to ignore. South African OMers who joined international ministry teams after participating in MDT gained a reputation for being well-prepared for service and valuable team members. Over time, other OM fields, recognising the tremendous impact, began to send their own people to South Africa to benefit from the programme.

Something for the whole family

Colin Phelps, responsible for OM training in Africa, joined MDT in 1988. Six months later, he found himself a changed person: “I arrived as an undecided follower of Jesus. I knew He loved me and I was open to the possibility of following Him wherever He led. I just wasn’t certain I was up to it.”

Participating in practical outreaches with 26 other disciples was a catalyst for change in his life. He joined the OM ship, Doulos, where he found himself a team leader after being on board for only a month.

Colin, his wife, Grietjie, who also participated in MDT, and his children later joined the MDT leadership team in Pretoria for six years. Having seen the impact that MDT had on their lives, they were thrilled when their daughter, Caroline, also chose to participate in the programme. “What I appreciate about my time on MDT is the complete honesty I found and the growth I experienced,” says Caroline.

Equipped to fulfil a God-given dream

Ever since becoming a follower of Jesus when she was 17, South African OMer Eden* felt called to take the good news to difficult places. Trained as a nurse and midwife, she wants to use those skills for the Lord in the Arabian Peninsula—one of the least-reached areas with the gospel.

At university, she heard a speaker from OM and decided to enroll in the MDT programme. She prayed about going to Jordan, but nothing came of it. Then she began praying about the Arabian Peninsula, asking God for confirmation. Within a day, she got three emails about that part of the world, and they talked about it in her MDT class.

“When I started talking about it, so many people from the [MDT] base knew connections or others who had worked as nurses in the Arabian Peninsula,” she explained.

Eden hopes to make lasting connections with women through her work. “If you touch the hearts of the woman, and she invites you into her house, then you can start to work with the family,” she explained. “I would like to build relationships and change lives like that…in a long-term kind of way.”

Thirty years after it was initiated, more than 3,000 people have completed MDT in South Africa. Now, other OM fields around the world are replicating the programme. With established training schools in Zambia, Zimbabwe, Germany and Ireland, and other fields actively exploring the idea for their own region, the now-global initiative is collaborating on guidelines and a shared ethos for the MDT programme to maintain the life-changing impact that the experience has had on many lives over the years.

Deborah Ngobeni, from South Africa, has a diploma in media studies and journalism. Passionate about communications, she has served with OM for over six years and currently works in the communications department of OM in South Africa. The 27-year-old speaks five languages.