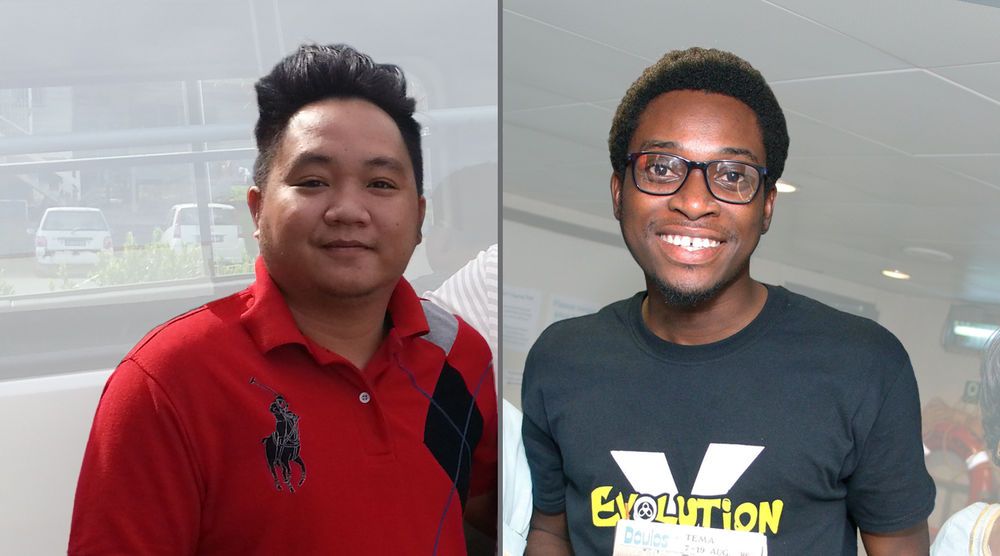 Ships: (l-r) Malaysian Doulos and Ghanaian Doulos, who were born within a year of each other in 1986/7, after ship visits to their countries.
Without doubt, the Ship Ministry has taken on a life of its own in the last four and a half decades. Many lives have been transformed by the gospel in the wake of a ship visit, or through outreach kick-started by the ministry.

There may be several cases of the ship inspiring parents to pass on the name, and its legacy, to their children. Churches and evangelical initiatives around the world also bear the name Logos, Doulos, or even Hope. The Ship Ministry recently connected with two men who were not only given the name Doulos, but are living up to it.

In August 1986, Emmanuel and Elfriede Quaye visited Doulos in the port of Tema, Ghana, when Mrs. Quaye was eight months pregnant with their first child. The couple bought children’s story books as they prepared for their baby’s arrival. They also took the ministry to heart.

“We were so excited because it was a Christian ship,” recalled Elfriede. “The work they were doing was amazing, helping the needy. We asked the meaning of the word 'Doulos' and learned that it meant ‘bondservant’. So right there in the ship, we thought that if our baby was a boy, we would name him Doulos.”

Sure enough, on 21st September 1986, after the ship had sailed on, the Quayes’ son came into the world. They had no further contact with the ministry, but spoke its name daily, having called their firstborn after it.

Exactly 30 years later, the port of Tema was hosting Logos Hope. Crowds of thousands queued for hours on a Ghanaian public holiday to visit the onboard book fair. Among the throng were three people on a very special mission. Clutching a well-preserved black and white flyer from the 1986 visit, Emmanuel and Elfriede had brought their Doulos - on his 30th birthday.

When a crewmember who was helping manage the crowds met the family and heard their tale, he raced inside the ship to let others know. The Quayes were soon being introduced to the 400 volunteers eating their evening meal in the dining room. Doulos had a rousing rendition of ‘Happy Birthday’ sung to him, amid much clapping and cheering for his symbolic name.

“When I was growing up, I had to find out the meaning of my name,” Doulos told his new brothers and sisters on board. “Paul uses it when he talks about being a bondservant of Christ, and he encourages all believers to be slaves of righteousness and servants of God. I took on that; I lived it, and I’m still living it.”

Mr. Quaye is full of pride at how his son has grown into the name he was given. “He is part of a singing group, and has been to an orphanage to give out gifts this morning,” explained Emmanuel. “That’s how our son spent his birthday. So what the ship is doing, bringing help and hope, is having an effect on his life!”

Doulos said he feels a prophetic call on his life and is exploring joining the ministry which he is bonded to by name, and through a common faith in the name of Jesus.

A child of hope

Back in 1986, those serving on board Doulos knew nothing about the Ghanaian baby. A year later, crewmembers found themselves in a remote Malaysian village which was in despair. They only spent a few days with the community, but they brought a glimmer of hope amidst grief and left a newborn a legacy wrapped up in his name.

Sabah, the East Malaysian state on the island of Borneo, was receiving the ship for the first time. Aaron Yong (Malaysia) was a short-term volunteer finding the cross-cultural environment a steep learning curve. Things got even more challenging when his first task on an outreach was conducting the funeral service of a woman who had just died of malaria.

A family of eight children had lost their mother. The youngest was just five days old. Aaron was the only one on the Doulos team who could speak the local language, but still, as he glanced from the coffin to the cradle, he felt anything but prepared.

He prayed for wisdom. Offering a perspective from Psalm 84, that length of life is not what matters, Aaron reminded the mourners,“Better is one day in His courts than a thousand elsewhere.”

The following day, the team returned to the village to learn that the baby had just opened his eyes for the first time. Those caring for the child were insistent the volunteers should name him.

The team settled on ‘Doulos’, their unifying and inspirational link. They all signed a souvenir postcard of the vessel and explained the name’s significance to the child’s father.

In 2014, Aaron Yong - who had become a pastor - found himself back in Sabah on business. He wondered if he could find Doulos, who would be 27 years old by then.

It helped that the Greek name was distinctive. A local pastor tracked down the young man, whom Aaron was delighted to learn was a youth pastor-in-training. Despite trying to run away from God in his youth, “the Lord called me back, and reminded me that He has called me to be His servant,” Doulos explained to the man who had named him.

The reunion was precious. Doulos had kept the postcard the ship’s outreach team had left with his family. He and Pastor Aaron now keep in touch and are an encouragement to each other.

It’s almost a decade since Doulos stopped sailing, but OMers know and trust that the legacy of the Ship Ministry lives on in the communities the vessels have visited, by God’s grace. It is especially encouraging to hear, many years later, of the next generation of Jesus followers - bondservants - whose lives are bound up with this unique endeavour for the Kingdom.