A legacy of care 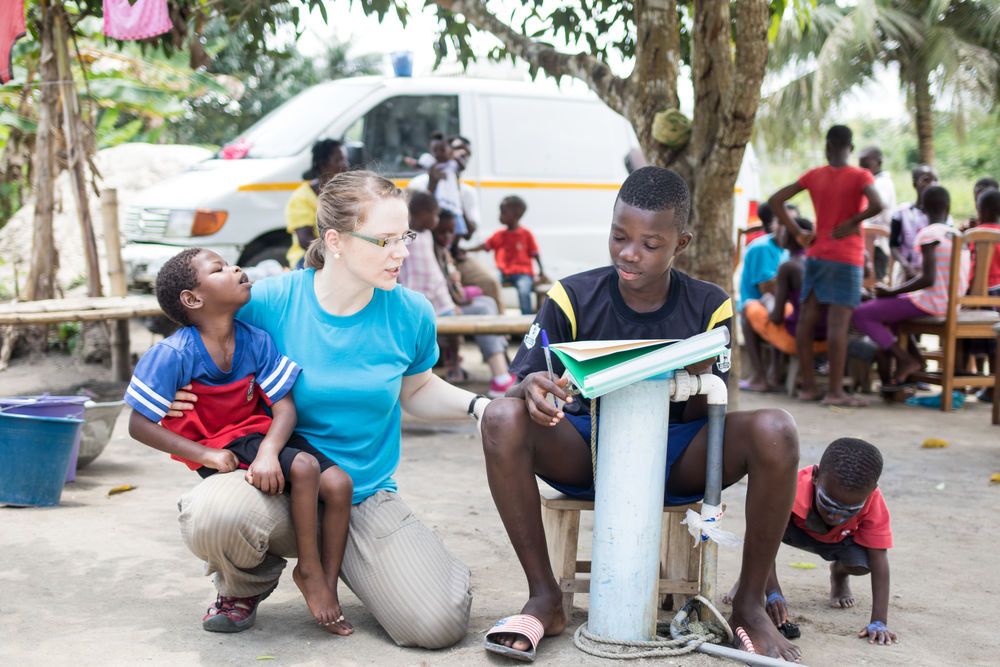 Ghana: Sekondi, Ghana :: Antonia Kinas (Germany) holds a boy with cerebral palsy while she encourages a teen as he completes his homework during Logos Hopes visit to Fathers Home orphanage.
Volunteers from Logos Hope have had the opportunity to reconnect with an initiative their organisation has partnered with on previous visits to Sekondi-Takoradi, Ghana.

Father’s Home Ministries, a children’s home which is currently raising over 40 young people, has benefited from teams lending a hand over the last 11 years. Rosemond Yamoah, the home's assistant leader, showed the improvements to the current ship's crewmembers when they visited the complex.

“In 2005, a team from Logos II came and helped mend the roof of a building. Then in 2010, a team from Logos Hope came and helped pour the floors and raise the walls of these flats,” said Rosemond, as they stood in the laundry room of a flat. Pointing to the corner, she said, “Your ship donated this washing machine, which will be a big help with washing all of the children’s clothing.” Leading the volunteers outside, Rosemond showed them the present building project which Logos Hope teams were assisting with: a new laundry facility with upstairs apartments. Over the course of a week, several groups had been sent to work alongside local construction workers on the new building.

While some team members helped with the manual work, others played with the kids. Not all of the children in the home are orphans: one little girl was sold by her parents; one little boy was left in a basket at the water's edge. Father's Home Ministries places the children in a 'family’ unit and they are raised by a ‘parent.’ The goal is that the children will be raised knowing they are loved and valued, and that they grow up to become self-sufficient adults.

“I believe one thing, that when the children see you, they feel encouraged,” said Rosemond. The fact that people have not forgotten about the children and care about their well-being helps them to feel loved, she explained. Rosemond sees the difference made by the legacy of care of the ship teams.

Published: Friday, 28 October 2016
Credit:
© 2016 OM International This email address is being protected from spambots. You need JavaScript enabled to view it.