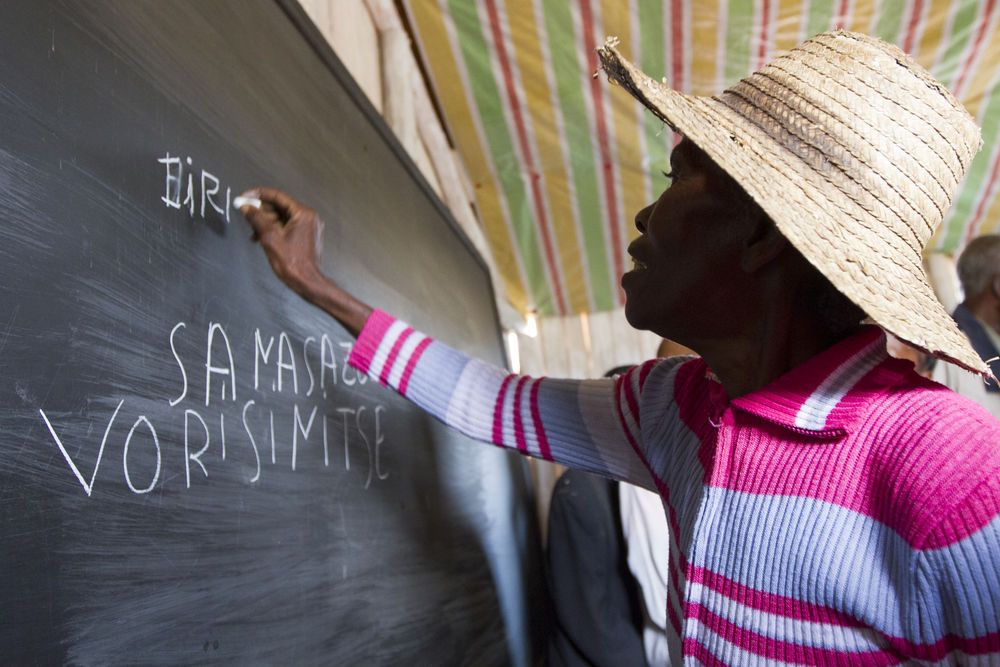 Madagascar: A woman proudly writes her name on the blackboard at a school opening. The one-roomed school was built by the community itself. OM has been building a relationship with the village over the past few months through fellowship and trainings. One of those trainings was Literacy training which two of the local ladies took up and started under a tree with 20 students of all ages.
‘Brown’ is the word that comes to mind when looking around the village of Taviramongy. Brown dirt. Brown trees. Brown wooden houses. Brown cows. Brown goats. Even the once-green cacti are coated in a thin layer of brown dust. In the drought-stricken countryside of southern Madagascar everything is a shade of brown.

Which is why the newly constructed school immediately draws the eye.

A red roof to symbolise the blood of Christ, white to represent light, and green…because the village wanted another colour and it matched the Malagasy flag, but also because it stands for growth.

The one-room school is the biggest building in the village, and the first of its kind in the area; education had never been a high priority in the community until recently. Connected to the village through a team member who had relatives there, the OM Madagascar Ambovombe team started making regular visits.

Meeting under a tree on Saturdays they reached out to the small community by being relational – sitting and talking with people about everyday matters. Through this growing friendship the team made up of local believers from Ambovombe and OMers were able to share what Jesus had done in their own lives.

In May 2016 the team held a training course on church planting and community transformation, which a few of the Christians from Taviramongy attended. Two ladies in particular were eager to reach out to their neighbours and bring a change to the village. Though both had left school early to get married—one at 15 years old and the other at 17—after receiving literacy training, took what they learnt and began applying it immediately.

Under the only tall tree in the village the two ladies held literacy classes. Soon 20 students of all ages were attending their lessons.

The Androy region is known for its dryness and desolate landscape – and the village is no exception. The tree did little to protect the students from the wind or heat.

So the village decided to build a school.

“We always encourage (people) to mobilise what they have,” said OM Madagascar Field Leader Hanitra. “So one person gave the land and then people started saying they would give this or that. We helped them with what they couldn’t provide; the roof sheets and cement.”

The community banded together and built the one-room school with their own hands. Now, Tuesday through Friday from 07:00 - 09:00 AM, students gather to learn at the Akany Fahazavagne (“Light Centre”). The literacy programme is a Christian-based curriculum provided by the Malagasy Bible Society.

“They don’t only learn to read and write, but through the programme they learn about God. Everything there, in the books, is about God,” Hanitra said.

The school was officially opened in October 2016. To celebrate, the village pooled funds together and purchased a cow to slaughter and eat at the event.

Cows are very important in the Tandroy culture. Not only a source of meat and leather, the cow is also a symbol of wealth and status. The school opening marked the first time the village killed a cow out of celebration rather than for a funeral or as a sacrifice – a big step in changing mindsets.

The school has already become a source of pride for the village; something they can look at and be reminded that it was their initiative and efforts that brought the building into existence.

“When the government builds something it’s a government building. When they come to inaugurate it the local people dance for the authorities and say ‘thank you, thank you’ but it’s not the village who did it,” explained Hanitra. “This is different. It’s theirs. They invited the local authorities to come and see what they had done themselves. It’s the opposite of usual.”

The people of the village are eager to reach out; they’ve already started building relationships in five other villages wanting others to know the love of God and have hope.

“Before there was nothing happening here,” said one man. “But now there is. Not from our strength but from God.”

Published: Wednesday, 16 November 2016
Credit: Rebecca Rempel
© 2016 OM International This email address is being protected from spambots. You need JavaScript enabled to view it.