The future in a bubble 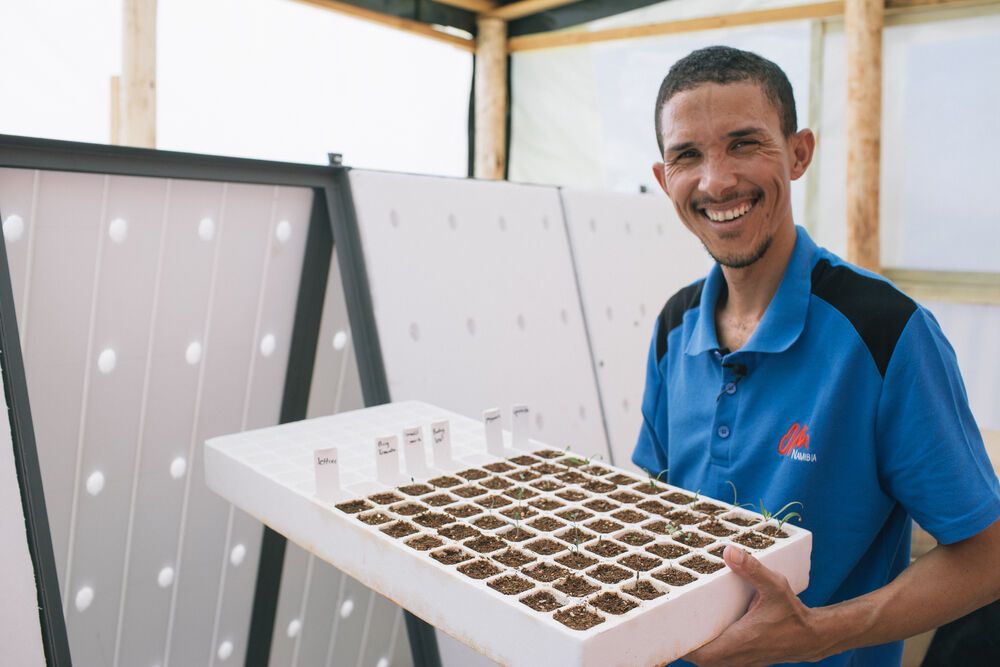 Namibia: Rodrieck Snyders with seedling plants for new Aquaponics project in Namibia
Rodrieck and Geraldine Snyders of Walvis Bay, Namibia, have committed themselves to giving back to God—and they’re using fish to do it.

Rodrieck, who currently works full time at the Walvis Bay harbor, and his wife, ‘unofficially’ became OM Namibia staff in 2014, when they had the opportunity to travel to Germany to receive aquaponics training. After attending OM’s annual Love Africa conference the next year, the couple dedicated their endeavors with aquaponics toward creating a self-sustaining method for funding missions.

Helping missionaries on the field has been on their hearts since they were married in 2007. While they have always supported missions as much as they could, Rodrieck and Geraldine are driven by a desire to give more. They currently support a local couple who operate a primary school in a nearby Topnaars community, but not to the extent that they would like. Aquaponics (a method of farming in which fish excrement is converted into fertiliser) could offer them a new source of income—all of which the Snyderses are committed to giving away.

Aquaponics fits perfectly as a sustainable income for missions in Namibia specifically, OM Namibia Field Leader Josh Kruger says. The country—Walvis Bay, specifically, bordering the Namib Desert—features harsh landscapes unwelcoming to plant life. Much of Namibia’s produce is imported from South Africa, driving up the prices of fruit and vegetables and limiting the average Namibian’s diet.

In contrast, aquaponics offers reusable resources, as filtered water recycles back into the fish tank to be used again. The water not only continues to carry nutrients for the plants, but a greater crop can be harvested with a fraction of the water usage.

“With the current water shortage our country is facing,” Rodrieck says, “this is the future of farming in Namibia.”

The future, for Rodrieck and Geraldine, has started slowly and incrementally. As their endeavors with aquaponics, which they call “the bubble project” in reference to the dome-shaped greenhouse, began last year, they felt led to start small, with a modest investment in their back yard. The project fit within their means and the calling they received from God, and they began to take the first steps, but they received a setback when someone hopped their fence in the night and broke into their bubble.

The couple realised they needed to take the bubble project elsewhere; safety was their concern, but the break-in allowed them to assess the system and plan accordingly. A move geographically allowed them to learn from their mistakes, and they decided, on a word from the Lord—“No eye has seen, no ear has heard, and no mind has imagined what God has prepared for those who love him” (1 Cor. 2:9; NLT)—to expand the bubble into a much larger system.

Rodrieck and Geraldine are currently renting space from a farming couple outside the city; not only is the area safer and sufficient for a bigger bubble, but the farmers are renting the space for the equivalent of a few vegetables each month, Rodrieck says. God’s blessing in providing a location, he says, is a reminder that He will fulfill His promises.

That reminder will be at the forefront of the Snyderses minds as they move forward. They are in the process of raising approximately $40,000 US dollars for the aquaponics system they need. Trusting God for his provision, they are moving forward with their dream to become a reliable source of funding for people serving on the mission field.

Published: Saturday, 03 December 2016
Credit: Andrew Fendrich
© 2016 OM International This email address is being protected from spambots. You need JavaScript enabled to view it.