The trainee becomes the coach 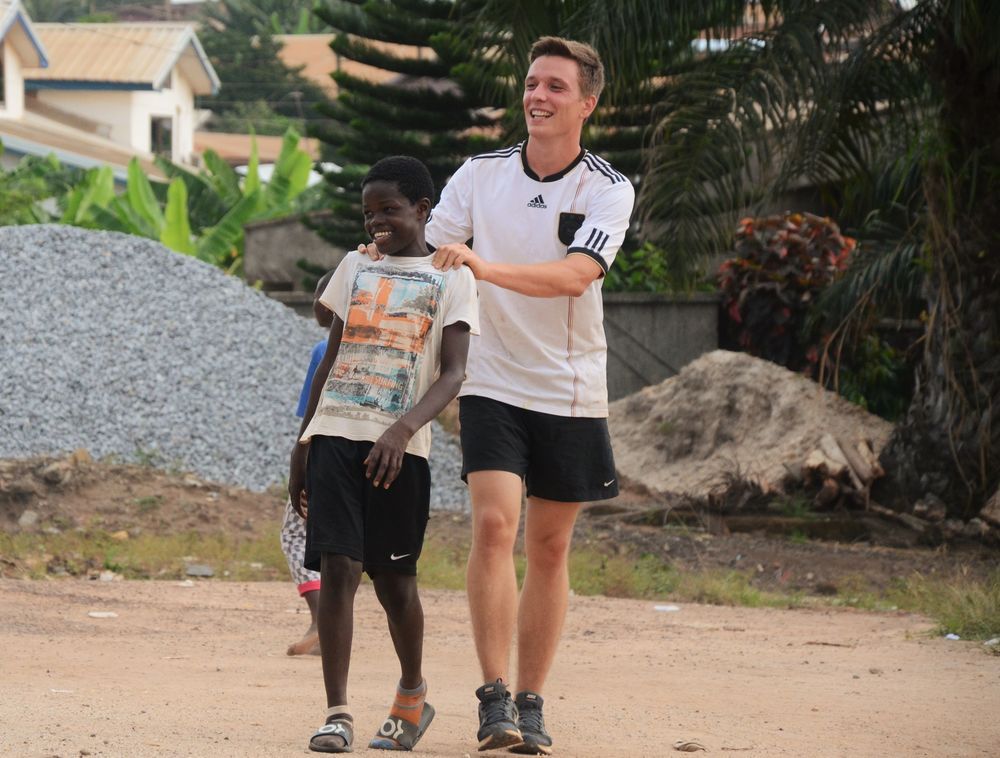 Ghana: Lukas Schultz serving as a sports coach in Ghana
A couple of days each week, 21 year-old German electronics technician Lukas Schultz wakes up and goes for a half-hour morning run.

Like anyone else, he’s trying to stay in shape; the difference between him and the average German his age is that Lukas stands out as the only white man jogging along the streets of Kumasi, Ghana, at 05:30—and he’s always looking for a way to bridge the gap between running and sharing his faith.

Lukas moved to Kumasi in August 2016, as part of a year-abroad venture he has undertaken with OM. Having been born in Egypt, and moving back to Germany when he was seven for his parents' work with OM, Lukas is no stranger to OM’s international presence, and when he explored other options, he came to the conclusion that OM was the best fit.

Lukas brings to Ghana a fresh perspective on advancing the gospel through sports, a rising trend in international missions—but he had no idea when he left Germany that his ministry would take place on the football pitch.

Though his desire had been to join OM Ghana ever since he visited OM Ghana Field Leader Chris Insaidoo in 2014, Lukas first sought out discipleship, unsuccessfully in South Africa and later joining OM’s Missions Discipleship Training programme in Kabwe, Zambia.

It was in Zambia, after the two-month programme, that Lukas joined a training programme for sports ministry—and at the same time Chris arrived from Ghana to attend a leadership meeting.

“Originally they had planned for me to do school ministry,” Lukas says. “But when Chris learnt that I was training for sports ministry, he decided it was a good fit.”

OM Ghana had previously attempted to launch a sports ministry, but it hadn’t been successful, and ever since the team had been praying that God would provide a new sports opportunity.

While receiving sports ministry training, Lukas learnt new concepts he plans to implement during his time in Ghana, such as ‘whole life coaching’—the application of a specific sports skill, such as heading in football, to life skills and, ultimately, the Christian faith.

Lukas also learnt about fatherlessness and the significant influence coaches have on children’s lives—and he’s seen it firsthand.

“One of my neighbors lives with his aunt, because his parents don’t want to take care of him,” he says about a boy he spends time with regularly. “Working with kids like him is an amazing opportunity.”

Such a situation highlights what Lukas sees as the most important aspect of sports ministry: building relationships to open doors for evangelism and discipleship.

“Sports is an international language,” he says. “Wherever you go in the world, you can play football with locals, and you can make friends immediately. You don’t even necessarily need to speak their language, but by the way you play as a Christian, the way you respect others and act differently, you can be a witness. Sports are a platform where it’s easy to make friends and share the gospel.”

To that end, while in Ghana, Lukas is looking for ways to build relationships with everyone he meets—even when he’s going for a run in the morning. During one jog, he met a young Christian man who, like most other Ghanaians, plays football regularly. He and Lukas have run together a few times since, and they’ve met in Lukas’s home to talk about faith and sports.

Lukas has also connected with local school teachers and coaches to play football with children during P.E. periods.

Building faith in a foreign land

The transition from discipleship student to leading sports ministry has proved to be a challenge for Lukas—though his faith has grown as a result. From MDT to ‘real-life’ mission work, he has experienced a noteworthy change.

“The first six months, when I was in Zambia and southern Africa, it was all just getting training, receiving information, learning, and people giving me a lot of attention and guiding me,” he recalls. “Here [in Ghana], it’s a completely different feeling. You need to be intentional and think for yourself.”

Chris has ideas about the future of OM Ghana sports ministry—such as a three-fold strategy to reach schools, churches and communities, as well as an OM Ghana team fitness programme—but for the most part, Lukas has to take the initiative himself; he’s also the only Westerner on the team, which provides its own set of challenges, as his responsibilities and cultural adjustments have tested his relationship with God.

“I’ve learnt that I need and want to be more intentional about my faith, and not have a faith that depends on my circumstances; so wherever I go and whatever I do, my faith does not change.”

As the only OM Ghana staff member working on sports ministry, Lukas has taken the liberty to plot out goals to aim for until he returns to Germany next April—a wide variety of plans ranging from a kids’ team and sports camp to a running club involving Bible study and prayer. While OM international’s annual Run for the World event took place in September, Lukas says he wants to put together a similar event, encouraging locals to run and raise funds for OM Ghana’s various ministries.

However, as part of his six-month plan for OM Ghana, Lukas’s biggest goal is to train one or more Ghanaians in sports ministry skills, so that the programme can continue even after he leaves.

For Lukas, the possibilities are nearly limitless.

“There are many different programmes, and ways to connect sports to discipleship and evangelism,” he says. “It’s simple and effective—plus, sports are awesome.”

Published: Wednesday, 01 February 2017
Credit: Andrew Fendrich
© 2017 OM International This email address is being protected from spambots. You need JavaScript enabled to view it.