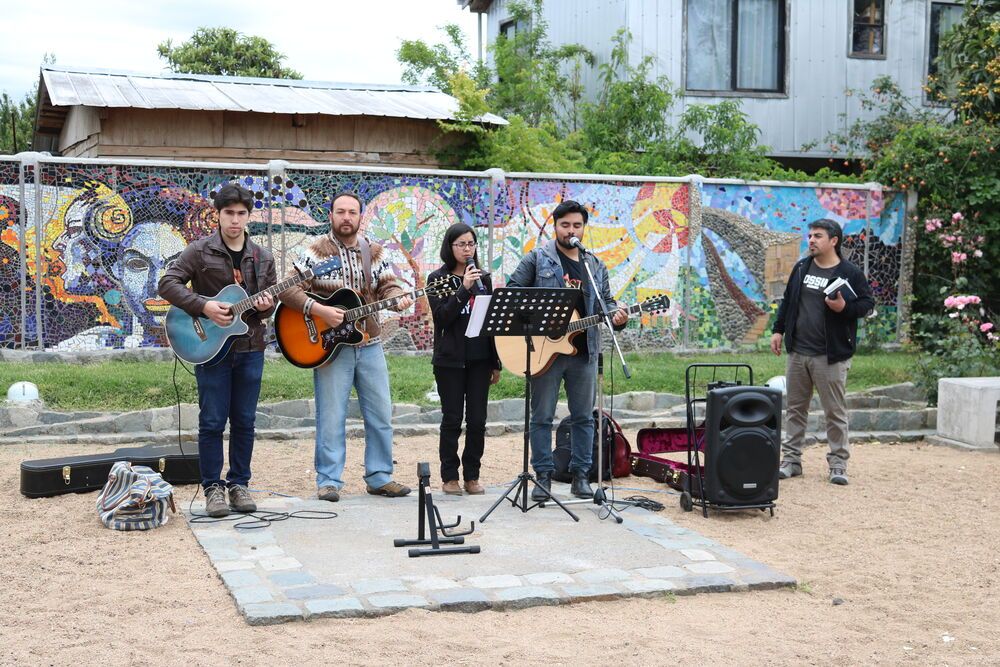 Chile: OM Chile travels to the south for the 2016 Adventure Team to help equip the local churches to do ministry in their communities and outside. Music in the street is a great way to attract attention!
Shanti Bolt from the Netherlands joined OM Chile’s 3-week Adventure Team with a passion for evangelism, but she was disappointed at first when the team started doing workshop after workshop instead of going out to the streets. She shares how her own passion for mission began and how she finally understood the need for mobilisation:

I didn’t have a particular reason as to why I signed up for this short-term mission trip; I just had some time left between the courses of my study and I was looking for a good way to spend it. People say that when you’re young you should have the time of your life and travel the world, right? I guess I liked the idea but didn’t know where to start.

What I did know was that I have always loved to be involved in missions. When I was a little girl my parents took me along on outreaches from our church and they encouraged me to use my talents and passions in several kinds of ministries and projects. I am really thankful for the Christians who took the time to disciple me; I could just watch and learn.

Throughout the years I developed a profound desire to become a devoted, ‘24/7 Christian’. I was maybe 11 years old, but I already knew that I did not want to become a ‘Sunday-Morning-Christian’. I wanted to be an everyday, all the time follower of Christ.

When I was on the 3-week Adventure Team in Chile, I expected the program to be a lot of evangelism out on the street, but it wasn’t focused too much on that. I was surprised and maybe a bit disappointed. There were a lot of useful seminars and workshops about missions and creative evangelism, but I thought: “I’m not here to talk about evangelism. I am here to evangelise, right?”

Nevertheless, I really enjoyed the program and getting to know Christians from the other side of the world. The personal connections I built within the Adventure Team were really awesome and enriching.

Then after we had travelled almost a thousand kilometres to the south and we were serving in another church, I started to realise that I had totally forgotten something so important. How did my 24/7 life as a Christian start? Did I do it all myself? No, it started when there were Christians who inspired me when I was 5 years old, who educated and motivated me, and who showed me their way of serving. By disciplining me, they invested for the long term and multiplied their work and reach.

I started to become aware of the beauty of OM’s approach in evangelism: you encourage, educate and motivate the local Christians about missions and you do maybe one evangelistic outreach on the street together with them. You do it with them, so that when you and your team leave, there will be mobilised Christians left there to take over the work. I never understood the name ‘Operation Mobilisation’ until this OM Chile Adventure Team.

Later we were able to share with small children about being a missionary. They were so interested and they asked very good questions! “What is it like to be a missionary? Is it hard to leave your home and family? Are missionaries poor? Which mission inspired you the most? At what age did your passion for God and missions start to grow?” And then I realized that I was about their age when my passion started to grow. There were some children in the group who wanted to become missionaries themselves.

I hope that God could inspire them through me. I believe that our God is not just someone in a history book, but a God who was, who is, and who is to come. And I really long for the day that everyone knows this.

Published: Thursday, 30 March 2017
Credit: Shanti Bolt
© 2017 OM International This email address is being protected from spambots. You need JavaScript enabled to view it.

When asked to share his testimony, a participant of OM Chile's Adventure Team realises just how much God has worked in his life.