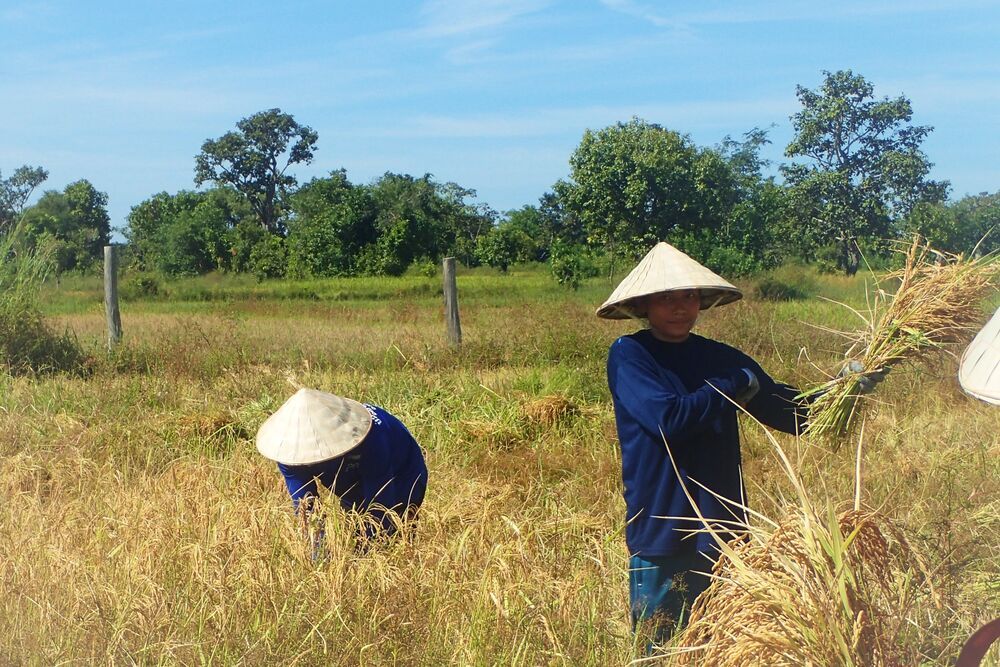 Laos: Laotians work tirelessly in their fields as a community to harvest all of the rice before the rains come.
Corrie Lafone came to Laos in early 2016 with the hope of helping in furthering the kingdom's work. Before coming she worked at her family's business in the United States. She is currently the book keeper for OM Laos and is involved in a variety of our ministries.

“Muan baw? (are you happy?),” asked my friend beside me. Peeking out from under my borrowed sun hat, I flashed a quick smile and nodded in response before turning back to the task before us. Yellowing waves of kao niao (sticky rice) swaying in a light breeze seemed all there was. With the steady soundtrack of cicadas nearby, the ceaseless swish of the scythe, and the practiced hand of the Lao rice farmers around me, half the field had disappeared by mid-day.

Harvest had come to the land of sticky rice. Entire villages were taking on an almost abandoned air as everyone lent a hand to families and friends in a race against the ever-present evening rains. In a matter of days, the entire countryside was stripped bare of her bounty, leaving behind field after field of stubble and echoes of harvest songs still drifting in the lingering rice chaff. Being a part of this integral part of life here helped me see how much Lao value community.

As each worker, from aging grandmothers to children barely large enough to wield a scythe, moved through the field there was a single-mindedness of movement that makes one wish to join their rhythm. Rather than an atmosphere of exhaustion and toil, an almost festive feeling permeated the air as each person moved towards the end goal as one unit, and the occasional song cut through the thick air. This scene awakened my senses and touched a place in my heart that left me examining my own choices. Instead of being controlled by their circumstances, the hard labour and poverty, they chose to create their own atmosphere of song and community.

After the work was finished, as my bus pulled out of the station of the sleepy village and began the twelve-hour journey back home, I found myself questioning the very fabric from which I was cut.  Back home I had been so focused on end goals that I ended up isolating myself from help and community. I attempted to do everything on my own and bought into the lie that it was because I didn’t want to burden others who had bigger problems or more important tasks. In the end I was even cutting myself off from the one who I had originally come to serve, Christ. This realization didn’t hit me, however, until I was faced with a culture that literally can’t function without the entire community working as one.

Now that I’ve returned home, I have a renewed passion and focus for the days ahead. It is a focus that includes not only me and my team, but my entire family, along with the help of my Father to see a thing to its completion. Our Father never meant for us to be alone but wants us to, “encourage one another, and build each other up”. Just as I saw the Lao villagers choosing to respond to their task as one, I hope to carry this lesson with me as I move forward.

Published: Monday, 05 December 2016
Credit: Corrie Lafone
© 2016 OM International This email address is being protected from spambots. You need JavaScript enabled to view it.

Landlocked Laos is one of the world's few remaining Communist states, and is a poor, ethnically diverse, stoutly Buddhist nation and a harsh place for followers of Christ.

OM workers share about the recent flooding in Laos and what this means for the people of this country.

"The encounter reminded me how important it is to take time, even just a few minutes, to talk to people around us," shares OMer Donna.

In Laos, OM workers can use English as a platform to be a consistent Christian presence in a community.