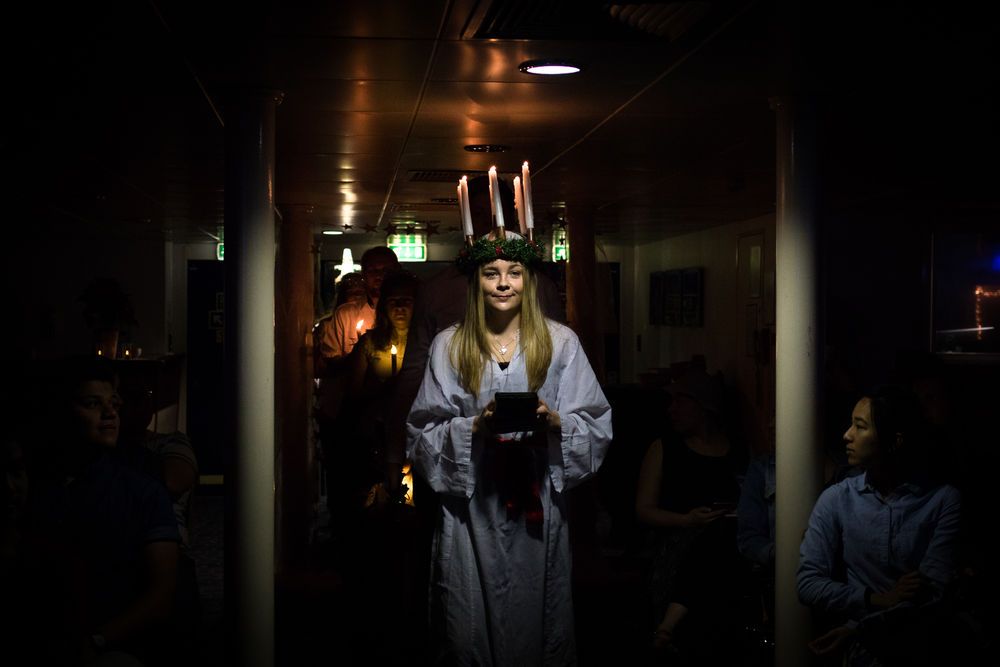 Guyana: At Sea :: Elsa Steinberg (Faroe Islands) performs the Northern European song Santa Lucia.
The Christmas season is always a special time of year for volunteers on Logos Hope, and this year has been no exception.

Advent, the four weeks leading up to Christmas, was celebrated with themed Sunday services hosted by crewmembers from different regions of the world.

“I love the multi-national flavour of the four Advent services we have in December,” said Carlien Govender (South Africa), the wife of Director Seelan Govender, who has celebrated eight Christmases with her family on board the organisation’s ships. “They are such a beautiful lead-in to Christmas time, while also celebrating the variety and value of the cultures represented on board.”

An Asian music-themed service kicked off the first Sunday of Advent and featured a series of traditional songs from different Asian countries. The following week, crewmembers dressed in bright African prints, and were led in a lively African dance.

A ‘hot-work’ permit had to be acquired, and a fire extinguisher was on hand, for the third Advent service, so that Western crewmembers could perform the traditional Northern European song ‘Santa Lucia,’ with lit candles on Elsa Steinberg’s (Faroe Islands) head. The final Advent Sunday, hosted by Logos Hope’s Latin Americans, featured a Latin-themed theatrical production of the Biblical account of Mary and Joseph.

“I loved seeing how everyone celebrates Christmas around the world through the Advent services,” said Gabriela Peralta (Peru), who joined Logos Hope in February and will be celebrating her first Christmas on board. “It shows that even though we all come from different places, we are united by the birth of Jesus.”

Volunteers also participated in a variety of holiday-themed community events during the Atlantic crossing. Christmas music was broadcast over the ship’s intercom system one Sunday afternoon as crewmembers brought out decorations and adorned the ship from top to bottom with festive garlands, ribbons, and ornaments.

The children who live on the ship also joined in the fun with their own school ‘open house,’ where they sang songs and taught adult crewmembers how to make a variety of crafts.

All of these activities point to the real reason for celebrating the season – the birth of Jesus. Crewmembers may be far from home, but they know they are never far from family, as they celebrate with their Christian brothers and sisters.

Published: Tuesday, 20 December 2016
Credit: OM International
© 2016 OM International This email address is being protected from spambots. You need JavaScript enabled to view it.

Georgetown, Guyana :: Children trudge through flooded fields to get to a kids' event held by Logos Hope crewmembers.

Georgetown, Guyana :: Crewmembers travel by boat up a river to deliver water purifiers to remote communities.