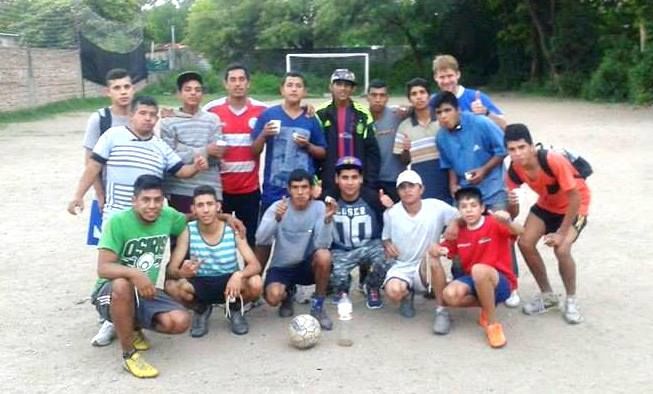 Argentina: Young men from a rough area of Cordoba are discipled through weekly football.
From the time OM Argentina started a football school in “Las Violetas” (A notoriously violent neighbourhood in Cordoba) they had problems with a specific neighbour. As the football pitch is next to his house, the ball would frequently end up on his property.

One day the ball once again ended up in the neighbour’s garden. While the team was waiting for him to give the ball back, his son stormed onto the pitch attacking some of the participants with his fists while carrying a gun in his pocket. The group was able to calm him down and have a conversation. Although he had reacted badly, the team could understand his annoyance.

They felt that, as Christians, they should do everything possible to maintain good relationships and give good testimony. They began planning on how to continue the ministry without annoying the neighbour, and a week later they were able to put up a net along the side of the pitch. Thanks to the net, the team felt more at peace about continuing with the ministry.

Each time the team holds a football class they have a new story to tell. One day, not long ago, four boys from another neighbourhood came to the pitch. They had never been to the classes before and the team was sure the young men had somehow heard about people coming together to play football there. Shortly after they started playing, one of the new guys began arguing with one of the participants. Suddenly he threatened to shoot him and asked one of his friends to bring him the gun he had in his bag.

One of the OM members overheard the threat and put himself in the way of the young man, telling him that this way of treating people was not allowed there. “We are Christians and here we don’t treat each other this way,” he said. Immediately the boy that made the threat stopped, put away the gun and asked for forgiveness. The team was very thankful to God that this young man respected the warning and that there were no more problems.

Each time that OM workers go to “Las Violetas” the team covers them in prayer. The crime and violence in this neighbourhood is a constant problem and even unimportant disagreements are often dealt with using weapons.

The day of the second incident, one OM worker had asked his wife: “Please, pray for us.” His wife was praying various times during the three hours the group worked in “Las Violetas”. The team was amazed, how once again God protected them and heard the prayers. They saw that the Lord has all authority, that He goes with them and that He takes away the fear that could stop them from doing this ministry.

Please pray for the OM workers that serve the community in these dangerous circumstances, for the Lord’s protection and authority over the lives of the young people they serve. Pray for their non-violent example and commitment to Christ to help change the hearts of those in the community surrounding them.

Published: Friday, 13 January 2017
Credit: OM International
© 2017 OM International This email address is being protected from spambots. You need JavaScript enabled to view it.