Life and light on the Kuiseb 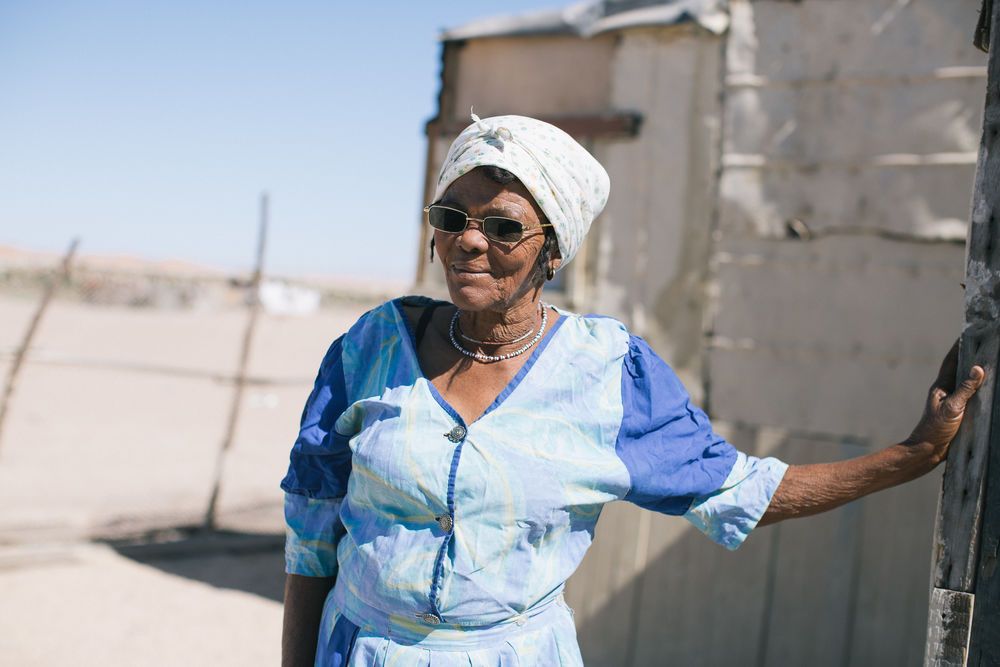 Namibia: A Topnaar lady In Namibia standing by her house.
You can thank the nara pumpkin for the Topnaars people’s settlement on the banks of the Kuiseb riverbed.

Over the past two hundred years, the Topnaars, a clan of the Nama people in Namibia, have migrated along the Swakop and Kuiseb rivers in search of sustainable living. They found it in the form of the nara pumpkin, which defies the surrounding desert to grow in abundance in the dry riverbed.

Approximately 1,500 Topnaars remain in Namibia, a third of which have settled on the Kuiseb, where the pumpkin stands as their sole source of community income. In addition to harvesting for food, the Topnaars collect the plentiful seeds and use them to make oil, which claims a good price at market. The seeds themselves are also considered a delicacy in the area.

As a community, the Topnaars are committed to preserving the purity of the land; religiously. No one takes more of the nara pumpkin than is necessary to ensure their survival.

Martin and Gertrude Bull, a local Topnaars couple, also harvest the pumpkin, but their purpose for making their home on the riverbank is fueled not by a pursuit of income, but by their quest to make Jesus Christ known among their neighbours.

Despite the presence of a historical Lutheran church a few kilometres away, the Bull family are the only Christians in their community of 500. Martin, a goat-herder and mechanic, is committed to building relationships in the community and sharing Christ, alongside Gertrude, who operates a school with around 20 children, where she also offers English classes.

It’s relationships on which the Bulls have founded their ministry. While the locals are friendly neighbours, almost all are turned off to the gospel—due in part to their belief that the nearby pastor-less church ensures their right standing before God, despite the fact that services are infrequent and poorly attended. And so, while preaching the gospel outright is nearly impossible, the Bulls have created an avenue of witness through the school and Martin’s mechanical abilities, which have put them in close relationship with most of the community.

While OM Germany and OM Namibia help fund the school, where tuition costs students just 20 Namibian dollar (about US $1.50) per month, the Bulls survive on their nara pumpkin seed profits—usually around 3,500 dollar (US $250) per year. Martin also owns around 20 goats, which he sends out into the riverbed every day.

Tensions are rising on the Kuiseb. The Topnaars, a small group of people spread out over kilometres on the riverbank, are underrepresented in the Namibian government. Though power lines run in close proximity to the community, the government refuses to provide electricity to the Topnaars, despite the fact that the country pumps water further up the river, denying the Topnaars the resources of their land.

Among the Topnaars themselves, poverty has driven some of the younger families to abandon old traditions of respecting the land. Given the good income the nara pumpkin ensures, thieves have travelled along the riverbed in recent years, harvesting the pumpkin far beyond their allotted land. Martin and Gertrude, like the rest of the honest Topnaars, have been forced by the thieves to expand their own area of harvest to accumulate the same amount of pumpkins—most nara plants, a collection of thorns and weeds, are stripped bare by those seeking to exploit the land for profit. Martin, in answer to prayer last season, found a nara bush with nearly five times the amount of fruit as usual; most of the Topnaars, however, are not so fortunate.

Martin and Gertrude have committed themselves to living at peace with all, and sharing the light of God with those they interact with every day. As funding permits, they are seeking to expand their school to reach more children and adults with the gospel.

Published: Friday, 28 April 2017
Credit: Andrew Fendrich
© 2017 OM International This email address is being protected from spambots. You need JavaScript enabled to view it.