Lifting burdens on the hopeless road 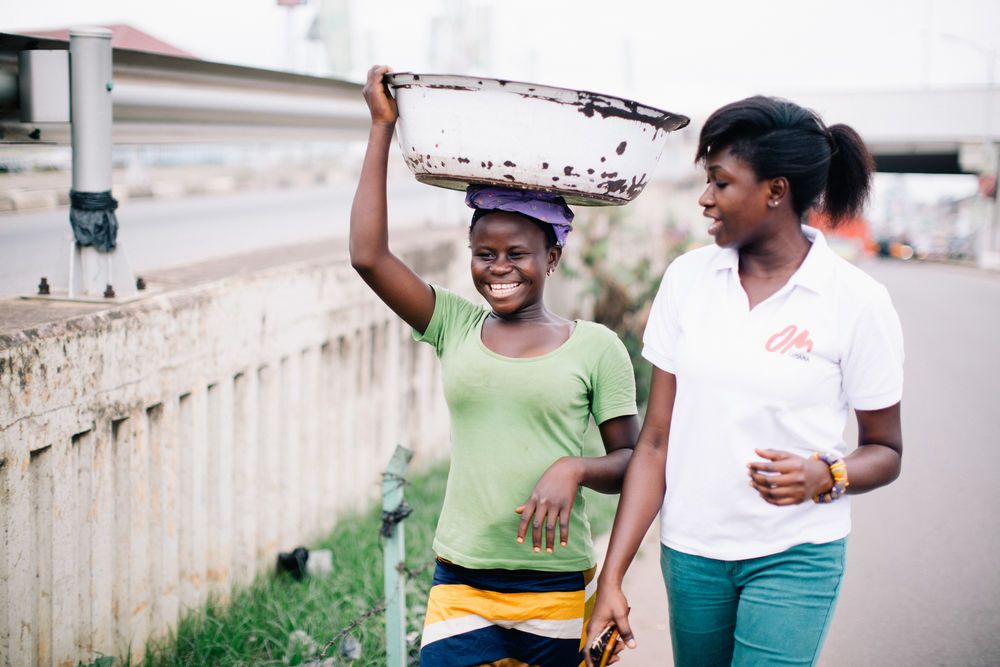 Ghana: Portia, an OMer from Ghana, walking with one of the Kayeye ladies that she ministers to.
On the corner of the street, a girl stands balancing an empty metal bowl on her head. She is tall, fairer-skinned than the average Ghanaian, and pretty. She greets OM Ghana's Kayeye Ministry Coordinator, Portia Owusu-Amoateng, with a smile. They exchange conversation for a minute or two before parting ways.

“We’re trying to help her out before she gets pregnant,” Portia says.

The girl is 18 years old. She, along with many others like her, lives on the streets of Kumasi, Ghana, where the promise of a paying job drew her from the northern regions. But what she found, as most women who moved south in search of decent earnings have, has left her alone and trapped in a cycle of abuse and struggle.

The empty metal bowl will be filled with heaps of maize meal, wood, fruit—and any number of other heavy items. Without the bowl, she will carry bags of rice on her head, or car parts, such as tires; anything she is ordered to carry by the people in the market who pay her.

It may seem like a fair deal: do your work, get paid; but for nearly every girl, the loads get heavier and heavier, and the money rarely—if ever—comes.

Captivity on the open road

For the Kayeye (a slang term originating in southern Ghana, meaning “going [to carry]” and used uniquely for the girls who carry heavy loads on their heads), the cycle begins in northern Ghana, where the demographic is nearly 100 percent Islamic.

Ruthina Aryeetey, OM Ghana’s children’s ministry coordinator, says that girls in northern Ghana become trapped when they see their friends and neighbours returning from the south with some money; to those living in poverty, the south seems like a sort of promised land where opportunities to make money abound. But the northern girls remain unaware of what their friends had to do to get what money they did—and so in search of the same fortune, they travel to cities such as Kumasi.

As they begin the work of the Kayeye, the girls soon discover that many southerners are quick to take advantage of them—tasking them for work as cheap labour for no other reason than their status as northerners.

The purpose of OM’s ministry, says Portia, who has taken the role of Kayeye ministry leader, is “to spiritually feed them with the gospel, to disciple them for Christ, and meet their physical needs.”

The best route OM Ghana has found is to provide skills training for girls to escape a world where carrying the loads of the Kayeye is their only work option. OM Ghana provides training in hairdressing and fabric-working for rescued Kayeye girls, not only as skills training but as an opportunity to disciple the girls and share the love of Christ with them.

It’s that ulterior motive that proves the most difficult for the Kayeye ministry, Portia says. Several NGOs line up to offer help to the Kayeye, but “for us as a Christian organisation, aside from trying to help them, we already have a calling to [share Christ with] them. But these girls are not willing to open up; some of them are traumatised. So you can’t just force evangelism on them.”

Ruthina says that convincing Kayeye girls to come live at the OM Ghana base is difficult. "They think for them to come to OM might not be a proper thing for their religious beliefs. That sets them back, and they don’t want to take that step,” she explains.

The girls are willing to learn new skills, but for most, a life on the street seems a better alternative to living at a Christian organisation. Ruthina remembers a woman from several years ago who wanted to learn tailoring, but refused to leave the street to come to OM Ghana. The Kayeye ministry team began to teach her the craft and covered the costs of her training, but within a year she was pregnant, as almost all the Kayeye girls find themselves due to abuse and rape.

“That’s all the more reason why we want them to come to a safe place, so we can teach them and guide them. But they don’t understand it that way. They think we want to force them to change religions.”

Because of the Kayeye girls’ unwillingness to live at the base, OM Ghana currently houses just 30 girls. It’s a small number, compared to the unknown-but-growing number of girls on the street (in the thousands, Portia says), but those lives have been transformed by the gospel.

“It would be very difficult going there to just pull them from the street,” Portia says. “There are so many NGOs doing that. But we have an objective, and we have a goal. We’re building toward something.”

In 2015, OM Ghana’s objective to transform lives brought a young girl named Asana to the base.

Like the Kayeye porters, Asana came from northern Ghana out of necessity. The third of six children, she watched her parents divorce because of her father’s mental illness; her mother travelled south to become one of the Kayeye. Asana lived with her grandmother and had plans to study beauty therapy, but at 10 years old she convinced her grandmother to let her travel south as well, to make money for school expenses, which she hadn’t been able to afford for quite some time.

In southern Ghana, Asana’s sister, a Kayeye porter, recognised immediately that Asana was too young to carry such heavy loads on her head—though if her sister hadn’t intervened, she would have gone the way of other girls who find themselves stuck with a metal bowl and an endless demand for work in brutal conditions.

Instead, Asana took a job as a dishwasher for a woman who sold waakye, a popular Ghanaian dish, on the side of the road. The woman agreed to pay Asana 5 cedis (approximately US$1.25) at the end of each day; as time went on, however, Asana learned that the woman had no interest in paying her more than once a week—and even then, whatever spare change she felt like giving Asana.

Cheated of her payment and alone, Asana found herself trapped on the street for more than a year, caught in a web of verbal abuse and mistreatment.

In 2015, a Canadian missionary working with the OM Ghana team introduced herself to Asana, and immediately talked with OM Ghana Field Leader Chris Insaidoo about stepping in to help. It wasn’t until November 2015 that OM Ghana secured Asana’s trust and her family’s approval; by then, Asana had returned north and was once again living in poverty. Though her grandmother at first resisted the idea, OM Ghana convinced her to bring Asana into a new, better life in the south.

Now 12 years old and living at an OM Ghana home for girls in Kumasi, Asana is once again in school—the funds provided completely by OM Ghana—and is at the top of her class. Her vision has changed: no longer does she want to study beauty therapy; now she plans to become a nurse, and return north to help the mentally ill where basic health care is inaccessible.

Published: Thursday, 25 May 2017
Credit: Andrew Fendrich
© 2017 OM International This email address is being protected from spambots. You need JavaScript enabled to view it.