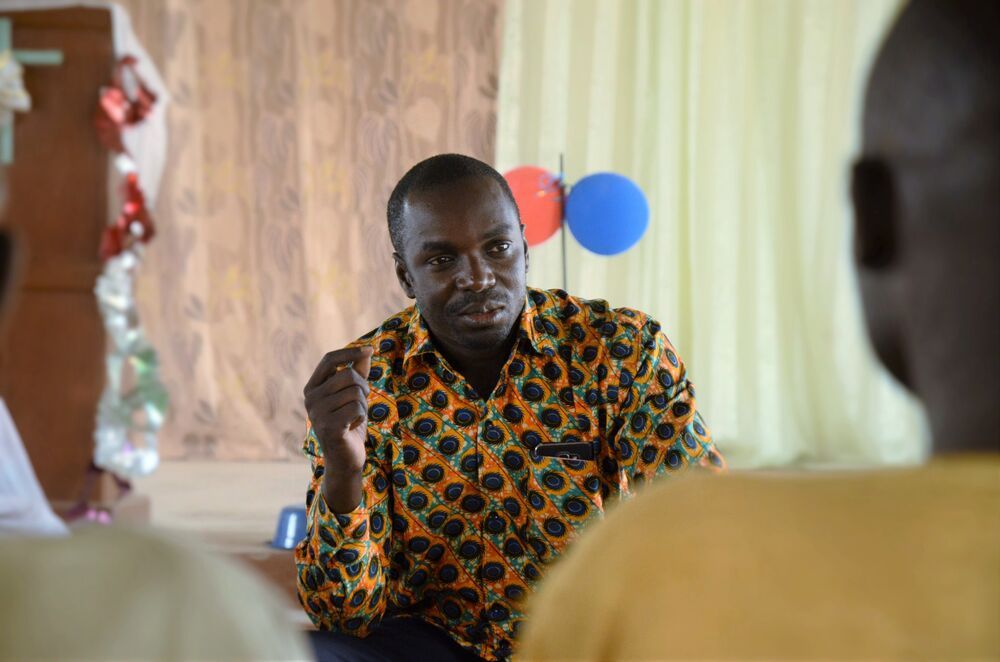 Ghana: Chris Insaidoo sharing with pastors in Northern Ghana.
It began as a one-man show.

In the year 2000, OM Ghana Director Chris Insaidoo set off with a mission to connect with pastors and plant churches in northern Ghana—referred to as The Overseas due to the fact that the rainy season leaves much of the region flooded and inaccessible by car. In contrast to its nickname, The Overseas was—and in many ways remains—a spiritually dry desert, with a nearly 100 per-cent Muslim demographic and little to no Christian influence. It’s foreign to most Ghanaians—as foreign as a country that really is overseas.

Sixteen years ago, OM Ghana didn’t exist. Chris had begun a ministry called Rural Evangelism Crusaders, which he operated as a church-planting and evangelism venture among the least-reached people groups of the country. Beginning in 2000, the ministry took him each Christmas to The Overseas, by himself, where he attempted to connect with as many pastors as possible.

It only took two or three trips before Chris realised he couldn’t handle the responsibilities of the ministry by himself; and so, though he sought only a small team, he added to his team three others, and his organisation—Rural Evangelism Crusaders—was no longer an individual effort. It was at the same time that Chris decided to give the outreach a name; given the message of the Christmas season, he came up with “HOPEVisiT”—a name that has stuck since.

The most recent HOPEVisiT, from the 22nd to the 29th of December, 2016, featured a team of nearly 70 volunteers from six different countries. The team was able to organise more than a dozen ministries in eight different Overseas communities.

Chris attributes the exponential growth of the HOPEVisiT team in recent years to the enthusiasm of the volunteers; word spreads as the volunteers return to their homes and churches with a wealth of experiences from the week. And, apart from the outreach itself, this accomplishes one of Chris’s greatest desires for the ministry: reaching out to the Ghanaian church to introduce a missions-minded community in Ghana.

“Something that is crippling the church is the fact that we are not mobilising the people to be involved in missions,” he says. “The church is not using its platform. The missional walls are very thick.”

The Ghanaian church has a long way to go, but mobilisation, Chris says, is the natural effect of the HOPEVisiT.

“No one has gone on HOPEVisiT and regretted going there,” he says. “Everyone who goes looks forward to being part of it the following year.”

It’s not the church report that matters, he says. “It’s the stories.”

And so, volunteers who experience the powerful movement of the gospel in the HOPEVisiT almost always “[go] back home and spread the word among their colleagues."

“It’s a short-term outreach—just a week,” Chris says. “But in one week, a lot can happen.”

And with everything that happens in one week, the influence for Christ can be far-reaching in two months.

OM Ghana stands at an impasse with the northern regions of Ghana. While the growing number of volunteers has enabled OM Ghana to reach more communities during the HOPEVisiT week, it also leaves a greater void after the outreach inevitably ends.

One of Chris’s biggest concerns is the continued work in The Overseas after the seeds of the HOPEVisiT have been planted; for follow-up, OM Ghana relies primarily on students enrolled in Missions Discipleship Training. The MDT program, Chris says, provides grounds for developing students to practically apply the training they receive.

In the 3-month program, students are given nearly a month of opportunities to serve local northern pastors through communication with the OM Ghana base; however, Chris says, the developing operations in the north call for more full-time missionaries to assist the pastors.

To see the message of the outreach—the hope of the Christmas season—become a lasting, far-reaching hope in The Overseas, Chris says, OM Ghana will continue to seek intentional local discipleship through the efforts of full-time missionaries.

But the HOPEVisiT—“just a week,” but so much more—will continue, with the expectation that growth will come not only in numbers, but in the hearts of the Ghanaian and global church.

Published: Thursday, 15 June 2017
Credit: Andrew Fendrich
© 2017 OM International This email address is being protected from spambots. You need JavaScript enabled to view it.