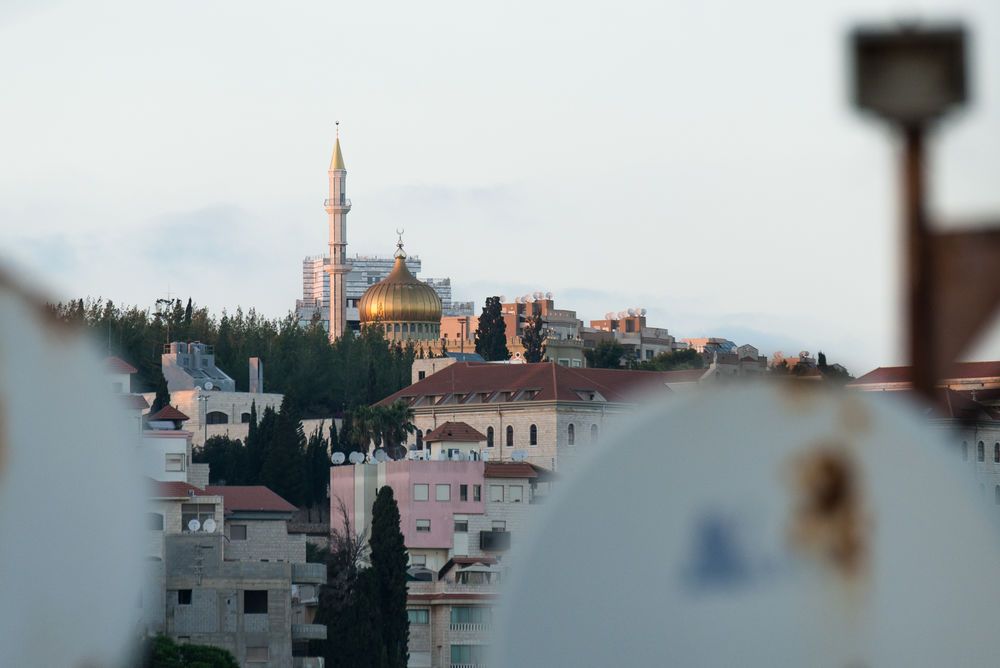 Israel: A mosque in Israel: Among the eight million people living Israel, there are a variety of religions and beliefs?from Orthodox Jews in Jerusalem, to Muslims in Nazareth, to secular Christians in Tel Aviv, in addition to Druze and Bedouin. Photo by Jenny Oetzell
“Then he said to his disciples, ‘The harvest is plentiful but the workers are few. Ask the Lord of the harvest, therefore, to send out workers into his harvest field.’” – Matthew 9:37-38 (NIV)

Before the start of OM's leadership meetings in the Middle East North Africa (MENA) area, OM’s associate international director of field ministries explained the importance of Jesus’ words at the end of Matthew chapter 9.

“I live in a fairly rural agricultural area, and you see intense activity at harvest time,” he said. “That's true anywhere in the world. When it’s harvest time, they get everyone helping out. The farmer’s doing it, his wife’s helping him, the children are doing it. Maybe they skip school at times to help out. The neighbors will help out, the cousins, uncles, whoever.

“If you’re responsible for the field, but you’re not the owner, if you feel like you’re not going to get the harvest done in time, you go to the owner and say, ‘Look, we need more people.’ And the owner will provide more laborers to do that because if you don’t harvest the crops when it’s harvest time, the crops die and they rot.

For OM Israel, now is the time to ask God, the owner of the field, for more workers to join a team reaching out to Arabs.

Over the last three years, Josh* and his wife, Andrea*, have focused on expanding ministry into Arab areas within Israel. Establishing partnerships with local churches, identifying potential areas and assembling training materials from across MENA have been essential preparation, Josh explained.

In regards to asking the owner of the harvest for more workers, “maybe God was waiting until the time when we were ready for all these people,” Josh suggested. “Before it would have been a lot harder. Now we are ready.”

“Structurally, we are in a position where we can grow,” confirmed Mark*, the current field leader.

One of the ways to promote growth is getting the word out, Josh said.

“A lot of people who want to do Middle East Arab ministry don’t know what country they want to go to. They have a heart for the whole region,” Josh explained. However, they often don’t realise Israel is a potential field.

“The main thing is exposure…people have to know it’s an option,” he stated. “If you have a heart for this group of people, we know how to place you there. If you have a heart to see people come to Christ, we’ll give you what you need to see that happen,” Josh encouraged.

To test the waters in these areas and to connect Israel to the rest of MENA, for the past two years Josh has arranged assignments for the men’s OM MENA traveling team (MTT). Last year, the men visited a dozen Arab villages and passed out 3,000 pieces of literature. They also went to five cities in the West Bank. “Short-term, only a team like that could do it, who’s trained and knows the language,” Josh said.

In the future, though, Josh hopes to see long-termers, who are making “relationships that would produce disciples,” established in Arab areas across Israel. “These are places where nobody else is reaching,” he said. “[I want] us to leave a gospel presence in each one.”

Building capacity for a bigger team

OM Israel started outreach to Arabs in 1974, but by 2006, the last worker dedicated to the ministry had left. When Mark took on the field leader role in 2012, he was tasked with four mandates, one of which was to revive work among Arabs.

That goal in mind, in 2011, Mark contacted Josh and Andrea, still singles at that time who had individually expressed similar visions. Both immediately (independently) wanted to get involved.

Josh had started ministry in central Asia before moving to the Middle East to begin Arabic classes. “Mark knew me from those days,” he noted. “My heart has always been for the unreached, the completely unreached. That’s always been my main focus wherever I go.”

Andrea, too, “had a heart for the same thing,” Josh described. “She wanted to be in missions full-time. She had a heart for Arabs. We were friends going down the same path.”

Before they got engaged, Josh and Andrea each moved to Israel to begin serving there. As their relationship grew, so did OM’s work among Arabs. After their wedding in Israel, the couple pioneered ministry in a new city, partnering with a local church, and paved the way for more workers to join.

Today, “we’re getting a lot of new people to the field, a lot of new applications,” Josh stated. "But there’s still room to grow."

Check out opportunities to serve with OM Israel: https://www.omusa.org/go/long-term!

Nicole James is a writer for OM International, passionate about publishing stories of God’s work among the nations and telling people about the wonderful things He is doing around the world.

Published: Monday, 06 March 2017
Credit: Nicole James
© 2017 OM International This email address is being protected from spambots. You need JavaScript enabled to view it.