'Freedom to grow in ministry and leadership' 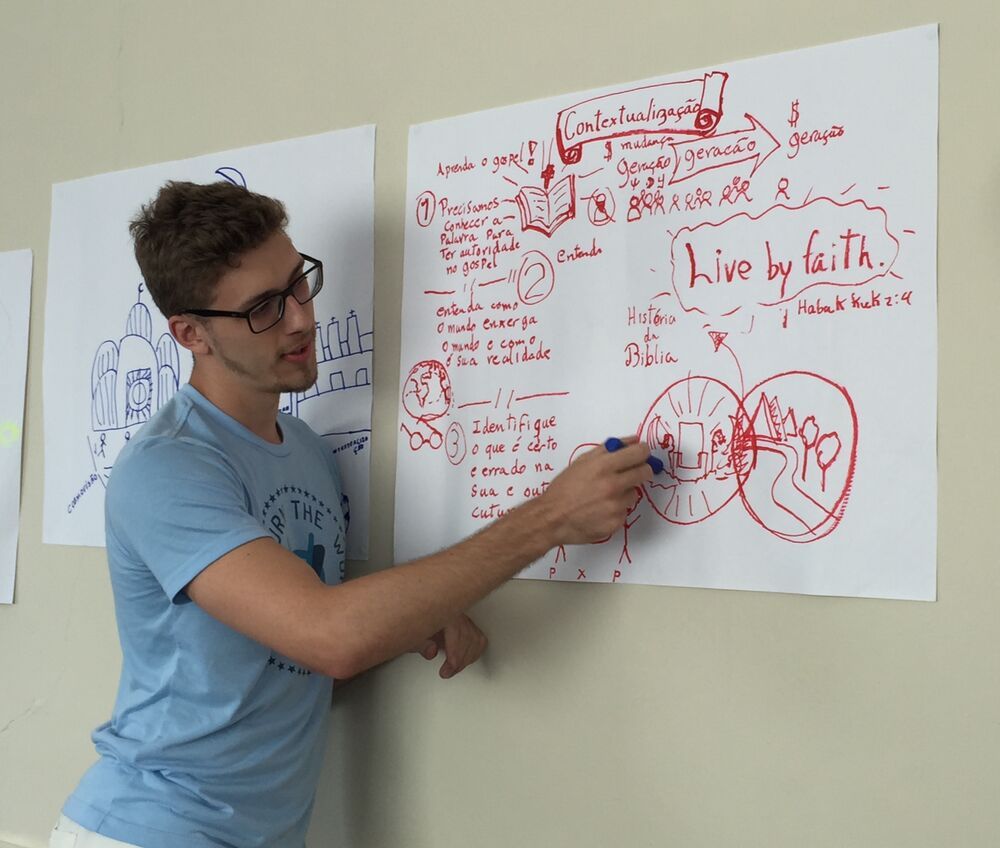 Brazil: Rafael Heineck presents his assignment during a CTM training course at OM Brazil.
Three years after OM established its home office in Brazil, the team developed a training programme in 1989 to prepare Brazilians wanting to serve overseas long-term (more than six months). Centro de Treinamento Missionário, or CTM, consists of two modules: a five-month intensive missions training course and up to three levels of English classes, depending on students’ proficiency level.

“Our goal is to train young people and [others] to be leaders and to go and to make a difference,” said CTM Director Nelia Leal.

Some students arrive at CTM with little to no Bible knowledge, “but they have a heart to do missions. They have a heart to see others, to help others,” she explained. CTM covers topics such as Biblical foundation for missions, anthropology, cultural studies, personal identity and purpose in order to prepare Brazilians for their time overseas.

“CTM is not just training; it’s life,” Nelia emphasised. “It’s living in a community; it’s learning to give and to give up things, learning to be humble, learning to live with other people and [learning] to respect and be respected. It’s not just teaching them about other cultures, but it’s everyday living.”

Impact on the field

Vitor and Ivanir Christovam attended CTM before serving in Moldova for five and half years. At the time, the training looked slightly different—participants spent three months on the OM Brazil base and two months on a short-term outreach outside the country.

“From our perspective, it made all the difference,” Vitor recalled. “[Everything] we had in class, it was good, but especially the practical time because we had some good experiences about how to live together with a team and how to share things…how to work together and to share leadership.”

As Vitor and Ivanir included their two children during their short-term experience in Paraguay, they were able to transition well as a family to life overseas. “When we arrived in Moldova, we could see the benefit of our first experience out of Brazil,” Vitor recalled. “We asked the kids, 'Do you remember Paraguay? How we worked there with the difficulties, with the situation, without understanding everything?’ Here in Moldova, it will be like what we had there.”

“Training is very important, especially if we have not only theory but also practice,” he concluded.

For Evie Costa*, an OMer serving in North Africa, the most important aspect of CTM was “knowing more about ourselves,” that is, recognising that travelling to another country neither makes a person stand out nor earns them special attention.

Humility, love and eagerness to learn – qualities necessary during CTM – become even more essential on the mission field. “You need a lot of love to go out and speak a language you don’t know, to try to understand a culture you don’t know and to try to express things in a way that won’t offend others,” she explained.

“Be prepared to accept the differences, to think, my culture’s not better and not worse than any others. Just different,” she challenged other Brazilians pursuing missions. “Have that open mind and have the desire to learn.”

CTM is often a time of character correction, Nelia observed. “If there’s anything in your life that you’re either hiding or don’t want to deal with it, somehow God does that here: He brings things up to the surface. Sometimes right from the beginning with the mission training. Sometimes not until they come back to do English, but I think it’s a time where God [deals] with everything in people’s lives, so they are more prepared to go overseas and to be a missionary, to really understand that ‘I’m here to serve; I’m here to bless; I’m here to tell others about Jesus.’”

Three weeks into her five-month training, Jemima Bessa, a participant in the January 2017 CTM, said, “Every day I learned something that I needed to change about me, to be a better [servant] of God and daughter of Him and to other people as well. I need to improve things and to be a better person.”

Priscilla Neves, another participant who quit her job to join OM, said, “I know that I have so many things to learn about the Bible, about the ministries, about the others. Living with each one is so different…I hope that in about [five] months, I will go out of here a better person and prepared to go to the mission. And I know that here I will be prepared.”

Trained to serve others

Rafael Bertolino, former mobilisation coordinator and OM ships representative for OM Brazil, said God transformed his life during CTM. “God showed me a lot of things I didn’t know about myself before,” he explained. Before CTM Rafael felt pressure to be the best and perform well, but he never realised the root of pride behind his ambition. He also learnt to live in community, even when it’s difficult. “I think it was important to have this training before going to missions because I felt much more prepared than if I had just jumped in,” he explained.

Gabriel Guedes, who completed CTM in 2015, valued his time at the OM base as a period of growth and defining his calling. The teaching on mentoring especially provided “a freedom to grow in ministry and leadership,” he said.

“It’s a very good training,” stated Marina Christovam, who participated in a 2016 CTM. “They have very good topics that can change your point of view about many things. It helps a lot. If someone wants to go to another country, if someone has a calling for missions, it’s very important to do this training because you go prepared to another place.”

After CTM, Marina began viewing life differently: “I started to understand why God created us, why God created the world and that I need to live for Him. Life is not about me, but it’s about Him.”

“Now I am sure that [missions] is something that I want to do for the rest of my life.”

Pray that OM Brazil will find a new leader for CTM, as Nelia transitions in July. Pray for more students to attend the training, so that OM Brazil can expand its resources and facilities. Pray for the current students to dig deep and allow God to transform their lives through their months living in community and learning about missions.

Published: Wednesday, 09 August 2017
Credit: Nicole James
© 2017 OM International This email address is being protected from spambots. You need JavaScript enabled to view it.

Underprivileged kids learn about Jesus through a weekly football programme.

Leaders from OM Latin America discuss the challenges and opportunities of ministry in the region during their annual meetings in September.