It's possible to go 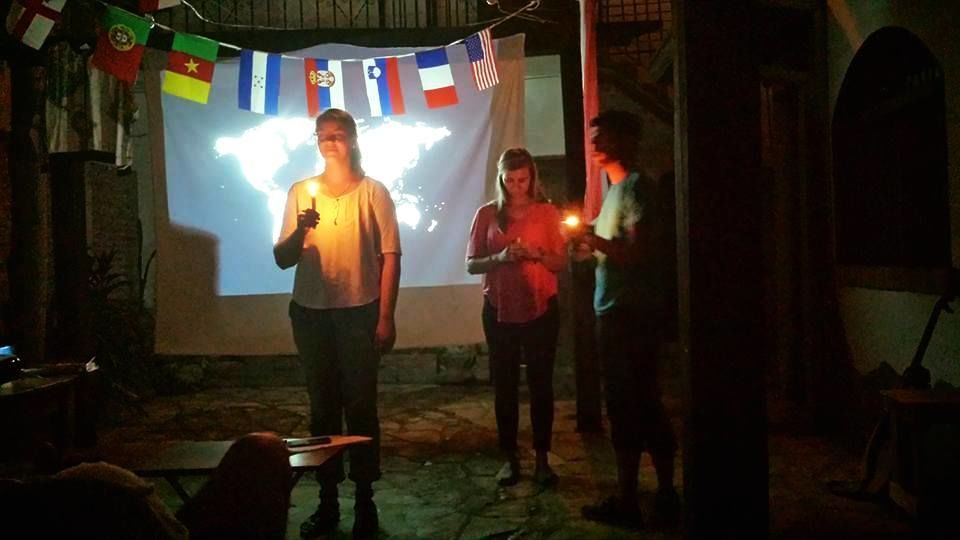 “I didn’t know that it’s possible for me, for a Paraguayan young guy, to go and share…in another country,” explained 18-year-old Fabricio Silva. “I didn’t know, so I didn’t think about that possibility. But I did know about the responsibility that we have to be sharing God with people that need Him.”

In July 2016, after getting to know OM team leader Rodrigo Vargas at church, Fabricio joined OM Paraguay’s Exposure training, a two-week exploration of global missions at the time. There, Fabricio said, his point of view changed about everything.

“I was searching for somewhere to serve, somewhere that can help me to grow up in my faith and give me the possibility to serve somehow,” he described. At Exposure, “I found more than that. I found a challenge that gave sense to my life.”

After finishing high school in October 2017, Fabricio hopes to take part in a four-month missions training in the south of Paraguay before going overseas with OM.

Meanwhile, he attended a CIMA conference in Paraguay, an event hosted by the international, interdenominational missions organisation Movida (which combines the Spanish words for “move” and “life”), aimed at helping young people grow in their relationships with Jesus and training them to use their talents to serve locally and globally. Whilst there, he shared his OM Exposure experience with a close group of six friends.

Three of the six participated in the next Exposure training with OM, that lasts a week. Fabricio came alongside them as they prepared for the event. “I was able to share my own experience here and help them…talk about some points that they should be focused on in that week,” he shared. “It was great to bring that possibility to my friends, too.”

A week of Exposure

“Very few people in Paraguay have cross-cultural experiences,” noted Evelyn Schröder, who has volunteered with OM Paraguay since she returned from serving on the OM Ships. Young Paraguayan believers often grow up in churches that only focus inward or on their immediate communities. However, “God also called us to other places to go and make disciples. It’s important to open their minds a little bit,” she explained.

Exposure, she said, is meant for people who are curious about missions. Originally, the team experimented with different lengths for the training, but settled on one week. Small groups of up to eight people travel to the OM base in Asunción for the training.

Communal breakfast happens first, followed by a devotional time, usually led by someone from OM. Then, participants have classes until noon. After lunch, they return to presentations. Topics include world religions, culture shock, disciplines of the Christian life and Bible translation. The team shares about plenty of missions opportunities within OM, and representatives from other organisations often participate as well.

“We watch a movie--usually George Verwer’s autobiography--and we watch Nefarious, which is about human trafficking,” said OM volunteer Markos Fehr, who helps with food, transportation and translation at Exposure.

Recently, the OM team added a simulation night, where they re-enact how church happens in a country where Christians are persecuted. “We told the students they would go to a small church. There was this Arabic couple receiving them in their home and giving them food,” Evelyn recounted. “It was interesting to see [participants] ask questions… They got into the role of the underground church. At one time, you heard the police sirens outside, and a policeman knocked on the door, and they all got quiet. They were taking the simulation seriously.”

Exposure weeks are a highlight, personnel officer Deborah Krahn said, "especially seeing how the whole group comes and gets to know Jesus better and deeper and how they get exposed to missions.”

The concept works well because there is a low barrier for participation. “It doesn’t demand a lot from people in terms of money and in terms of time,” Markos explained. “It’s very accessible for people, but at the same time, it’s an intensive training.

“The best thing about this is it’s a small group, and we can have time alone with the people. This way of having a training really has an effect because it’s so personal.”

Paraguayans have participated in world missions for several decades, but only a handful have trickled out through OM each year, mostly young people from Mennonite colonies in the Chaco region headed to the OM Ships Ministry.

“For me, it doesn’t matter where they go, just that they go. That’s still the most important thing, but we try always to let them know there are more opportunities because the ships are not for everyone,” explained OM worker Kelley Dominguez. “It would be very good to see people also go to other countries, like unreached people groups or places like Africa or India.”

According to local pastors and OM staff, world mission opportunities are rarely publicised or promoted in local churches. The high cost of overseas missions factors in, as does misinformation about what prior experience is required to be a missionary. “They very much have the mentality that you have to be somebody specific to go. Maybe you have to have [completed] a Bible study, gone to Bible college or have experience already,” Kelly explained.

In both the German and Spanish communities, parents often seek to preserve cultural and family ties by keeping children close to home. When Fabricio told his parents about his interest in serving overseas, they asked him not to go. “They said I’m too radical in my way of thinking,” he noted. “People think you’re too radical, but that’s being a Christian: denying yourself, dying every day [to] your own flesh.”

A base to call home

In addition to facing financial and family challenges, OM is still relatively unknown in Paraguay outside the Chaco. For the last three years, however, the team in Asunción, Paraguay’s capital, has been slowly growing and expanding its programmes—thanks to a generous property donation of two houses, including its current base, and a large piece of land.

“When we received the donation, we got the responsibility to do something relevant with that donation as well. So that was the trigger for OM Paraguay to really start working,” stated Rodrigo. “I think that was critical... We have a place people can visit us, and [in terms of] legal stuff, it’s important to say we own something. We have an address. It gives us a little base for many other things we need.”

Through regular prayer nights, Exposure trainings and participation in Paraguay’s inter-organisational collaborative group CONAMI, OM hopes to step up the number of Paraguayans mobilised to share the gospel abroad.

“Our main focus at this point is the international focus. We want to see vibrant communities of Jesus followers among the least reached. Whatever we do, whatever we start should contribute to that. We know local ministry is necessary but should be pointing to that vision,” explained Rodrigo. “We don’t want to do a lot of things; we want to do things that are powerful and will help the purpose we have in OM Paraguay.”

At the last Exposure training, OM welcomed a mixed group of Spanish Paraguayans and German Mennonites—a mixed culture group. During the week, some felt called to serve in missions. “We explained to them that maybe it’s a long journey, but [it’s important] to have an open heart and to say to the Lord, ‘Yes, I want to step into missions, and I want to serve overseas wherever you want,’” Rodrigo noted.

“For example, a girl that’s studying nursing is asking us where she can serve with OM using her profession,” Rodrigo said. “I would like to see more people going out with OM to different opportunities, not just the ship. I want to see more people joining the training and more lives impacted.”

Pray for the pastors in Paraguay to develop mission-minded hearts. “We think that pastors are the key to missions,” explained David Dominguez, who serves in mobilisation for OM Paraguay. Pray for more Paraguayans to be challenged for missions and sent out to the unreached.

Published: Wednesday, 26 July 2017
Credit: Nicole James
© 2017 OM International This email address is being protected from spambots. You need JavaScript enabled to view it.