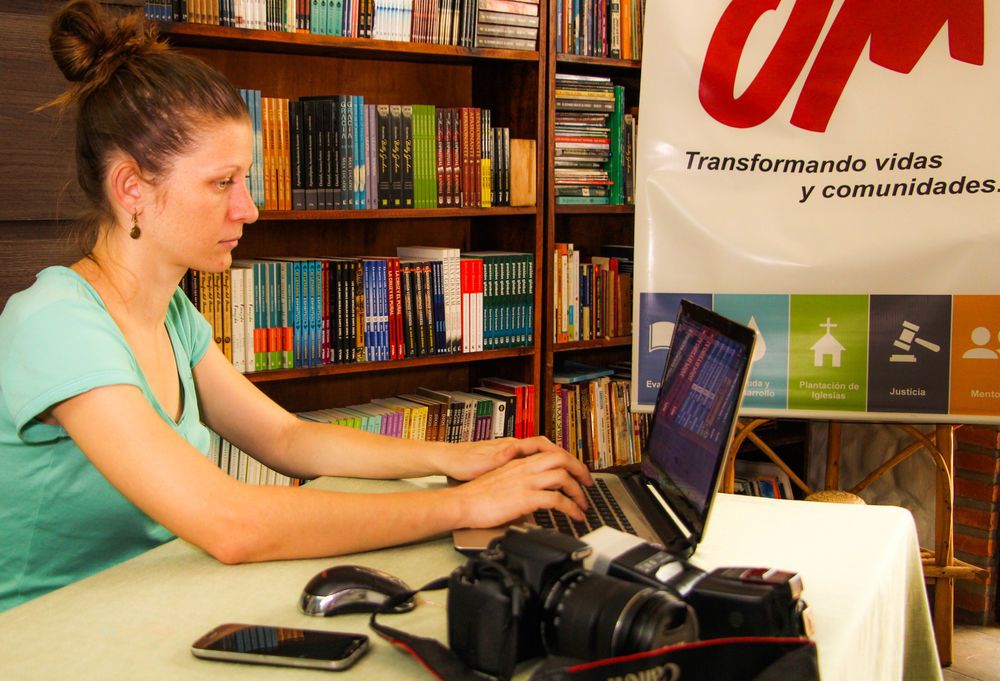 Paraguay: OM Paraguay base administrator Kelly Dominguez works as a photographer to provide financial income.
What do an electronics engineer, a travel agent and a photographer all have in common?

At the OM base in Asunción, Paraguay, they call each other team.

In February 2014, Rodrigo and Elisabeth Vargas moved into an apartment on OM Paraguay’s newly donated property. Both had previously served with OM Ships but were working other jobs--Rodrigo as an electronics engineer, Elisabeth as a travel agent--when country leader Eddy Froese asked them to start representing OM in Paraguay’s capital, Asunción.

“The place was really dirty. Many things were broken. It was a lot of work to put this place in a condition that we could live and start something,” Rodrigo recalled. But the base also catalysed OM’s growth in Paraguay. “It gave us the responsibility to start working harder” on top of their paying jobs, he explained.

First, they started monthly evening prayer meetings. Next, they recruited Kelly Dominguez, an OM alumni who had served in Africa, to join the emerging team. “She didn’t have any specific role at that point, but we had a lot of need on the team,” Rodrigo said. Markos Fehr, who had met Kelly in Uruguay, was the next recruit as an OM volunteer.

The developing team brainstormed role descriptions and started different initiatives to mobilise Paraguayans into missions. They accepted new volunteers and team members—some who had returned from other OM outreaches; David Dominguez, Kelly’s husband, married in.

Meanwhile, none of the OM team members stopped working their regular jobs. Rodrigo established his online business; Elisabeth continued working at the travel agency until their son was born; and Kelly took a photography course, eventually starting a photography business with David.

“It’s really difficult for us to get support for doing missions locally,” team leader Rodrigo said. “The traditional model of asking people for support does not seem to work here, so we found a way of doing our own businesses as well.”

Priscilla Isaak, who runs the King’s Messengers children’s ministry, works as a pre-school teacher during the week. Deborah Krahn, who works as the personnel officer, takes a full load of university classes and picks up side jobs. And Eddy, the country leader, owns a 200-hectare (494 acre) dairy farm that supports his family (as well as the two local families working for him) and sponsors his international travel for OM.

“We are in a new generation of people,” Rodrigo explained. “We are happy serving in OM, but OM is part of our life. We are light of Jesus in other things we are doing as well. Sometimes, we are serving here in Exposure…sometimes we are switching, and othertimes we are talking about business.”

The need to generate personal income whilst serving in missions could be seen as an excuse not to serve, said David, who facilitates mobilisation for OM Paraguay. But following the “old school” support way (i.e. a missionary relies solely on money from donors) is not the only model, he explained.

“We get some support--even though it’s not enough for one person, and we are a family--and we generate the rest,” David shared. “We do not just pray and ask for money; we ask for work, and the work comes, but just at the right time.”

Naturally, there are disadvantages to the work-ministry model. Part-time workers cannot accomplish as much as those serving full time. “Since we are not full-time missionaries, it’s very challenging to continue to do more projects. There are so many opportunities and responsibilities, but it is very hard because everyone’s working to support themselves. That’s one challenge. And another challenge is to have more committed people to work. [The team] is growing now with volunteers, but volunteers don’t carry as many responsibilities,” explained Kelly.

“It’s a balance of time, talking about work. But we see your work as part of the mission of God in your life.… I am a disciple, and I have to be a disciple whatever I do. The work in OM is not the mission because my life is a mission whatever I do," he summarised.

“Our first call is to Him,” David emphasised. “We have to glorify Him and adore Him in whatever we do—our normal job and the ministry.”

A few years before he joined OM, David was working full time at a bank. “When I left that environment, I decided to serve God and prioritise ministry,” he said.

That didn’t mean not working, but it did mean finding more flexible options. “The Bible teaches us to not be worried about money, to not be stressed, but the reality is that we as human beings get stressed, and I think God provides different ways we can solve that problem,” David stated.

Today, he earns money through photography and social media management—both jobs that allow him to organise his own schedule and rearrange commitments if he’s asked to serve at a ministry camp or an OM event.

Rodrigo’s online business works similarly. “If I have to attend an OM meeting for a week and a half, I can just go. I don’t have a boss,” he explained. “The idea of having a flexible job…is good for the OM world.”

Sometimes ministry involvement means David stays up until 2:00 in the morning finishing projects for clients. At times, Rodrigo, too, has to double up on business after travelling to OM meetings. Still, earning income allows OMers in Paraguay to remain relevant in their community—important at home and overseas.

“We want to see more people challenged for missions, interested in missions and stepping forward for missions. We want to see more people going out from Paraguay to serve overseas to the unreached, where there is no church, no Bible, and [we want them] to be relevant to those societies,” Rodrigo said. Oftentimes, being relevant means having a real job and reflecting Jesus with their lives. “That’s something we want to transmit to the people.”

Evelyn and Mateo Roniller, a physical therapist and a football coach, are involved in ministry nearly every day outside their regular jobs. Married less than a year, they hope to gain experience working and serving in Paraguay before moving to a country in the Balkans region of Europe. “We want to go through OM, but long term we would like to be tentmakers—to live there and work there,” Evelyn explained.

“There is so much potential for [Paraguayans] to go out to the unreached and live their faith there. They could be professionals, study something here and go somewhere else, knowing Jesus and bringing people to Him,” she stressed. Paraguayans are friendly, family-focused and could easily adapt to cultures in least-reached part of the world, she mused. Churches in Paraguay are continually growing and producing many theology students. “They have so much information about God. Just put them in an unreached place, and they will be a light there,” she suggested.

As for OM Paraguay’s future, Elisabeth dreams of seeing the team fully formed, including people from outside Paraguay, the various ministries working effectively and a growing number of people being sent to the least reached. Professionally, she has another goal: “Sometimes we have the desire to open up a travel agency.”

Pray for the OM Paraguay team to continue to find creative ways of supporting themselves and engaging their local community. Pray that they will be able to balance their time well in order to further OM mobilisation projects. Pray for more workers to join the growing team.

Published: Thursday, 20 July 2017
Credit: Nicole James
© 2017 OM International This email address is being protected from spambots. You need JavaScript enabled to view it.