Trekking and turning on the light 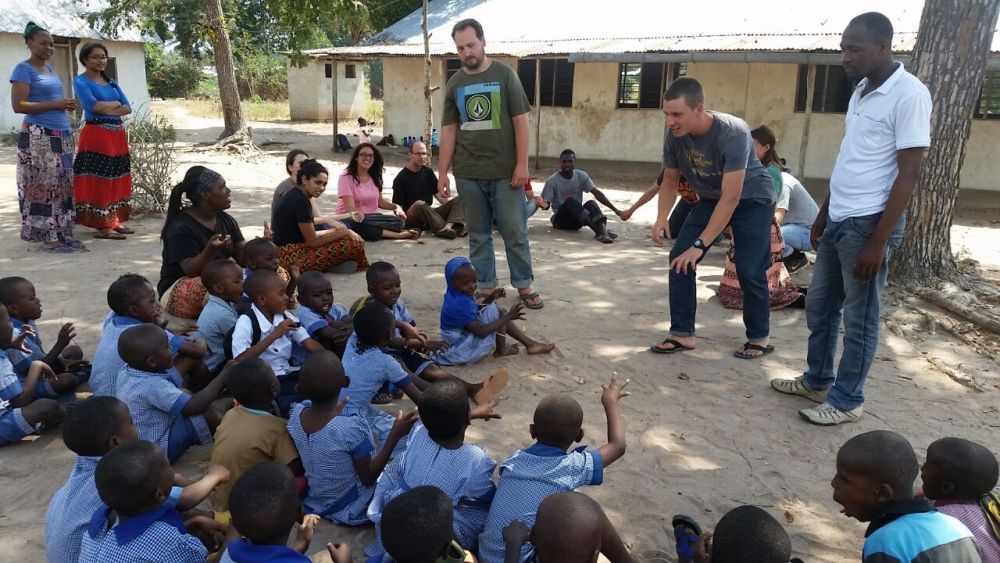 Tanzania: The Africa Trek sharing their faith in Tanzania.
Across the southern regions on the continent of Africa, the sun rose and set on a team of 18 missionaries from around the world, living in tents for two months in 2016 and proclaiming the good news of Christ to everyone they met.

In rural Malawi: dusty, well-worn roads led through village centres and alongside rows of mud and clay thatch-roofed houses.

In the tropical Tanzanian bush: a wealth of pineapple gardens covered the landscape with a tapestry of thorny red flowers.

In northwestern Zambia: punters directed long canoes through a maze of channels in a vast wasteland of swamp.

Each horizon brought a new environment to the Africa Trek team—the 18 individuals from seven different countries—and wherever they went, they took the gospel to some of the most unreached people in Africa. Part mission trip, part discipleship training, the Africa Trek, a venture started in 2011 by OM Africa, began in South Africa with two weeks of training before the team travelled north to Malawi, Tanzania and, finally, Zambia.

Evangelism was a central component of the Trek.

For Lukas Schultz, a 21-year-old German who had completed OM Zambia’s Missions Discipleship Training (MDT) programme, evangelism was a new concept. A relatively uncommon practice in Germany, evangelism was not part of Lukas’s life before MDT. While in Zambia, Lukas participated in two evangelism outreaches. Both were uncomfortable, he says—not because of the outreaches, but because he was completely unfamiliar with the notion of walking up to someone’s door and generating a conversation that leads to Christ; it was, he says, “talking with people and trying to mention Jesus when clearly they didn’t want to hear anything about it.”

On the Trek, evangelism was part of the regular rotation—and the discipleship the team received prior to their journey into the African bush had a profound influence on the team, Lukas says. In fact, it was the Trek team that took away more from the experience than the people they shared about Christ with.

“For us on the Trek, in some ways I see those three months as having a much bigger effect on us as we had discipleship,” he says. “It affected the lives of the people we met, but in the long-term it had a greater effect on us.”

But it wasn’t a meaningless encounter for the people they met, either: Lukas saw real change occurring in three Tanzanian women who accepted Christ and understood that they needed to change their lifestyle of living with men they weren’t married to.

The experience contrasts, Lukas says, with a witchdoctor in Tanzania who listened to the gospel being presented but refused to follow Christ because he knew it would mean renouncing his practice.

Both responses serve as examples of an evangelism concept Lukas and the others on the Trek team learned during pre-field discipleship: “Switching on the light.” The idea behind the term--that evangelism is nothing more than introducing the gospel to people and seeing who is drawn to the light--changed the way Lukas viewed the process. He learned to evangelise like Jesus did—through telling stories. Drawing from Jesus’s parables in the Gospels became Lukas’s favorite method.

“In one way, I think evangelism means explaining the gospel to people, and then through evangelism you can figure out who is interested,” he says. “You can identify people who really want to know more. And out of that, you can stay in touch with people and disciple them.”

Learning to plant a seed and let God take care of the growth allowed the Trek team to speak boldly to complete strangers—people they probably will never see again.

“It was a struggle to go to places and evangelise, and leave again, and I had no idea what was going to happen to those people,” Lukas says. “But everywhere we went, there were churches and OMers who could follow up.”

Whatever fruit God brings from the Africa Trek, the team took the gospel to those who had never heard it before—as far as fishermen living on floating islands in the marshlands of Zambia. The seeds have been planted; the souls are in God’s hands.

Published: Tuesday, 05 September 2017
Credit: Andrew Fendrich
© 2017 OM International This email address is being protected from spambots. You need JavaScript enabled to view it.

“I pray: ‘Give me the strategy, give me the way, the window to talk with Muslims. For me, my name is a bridge: it sounds Muslim, and they welcome me...