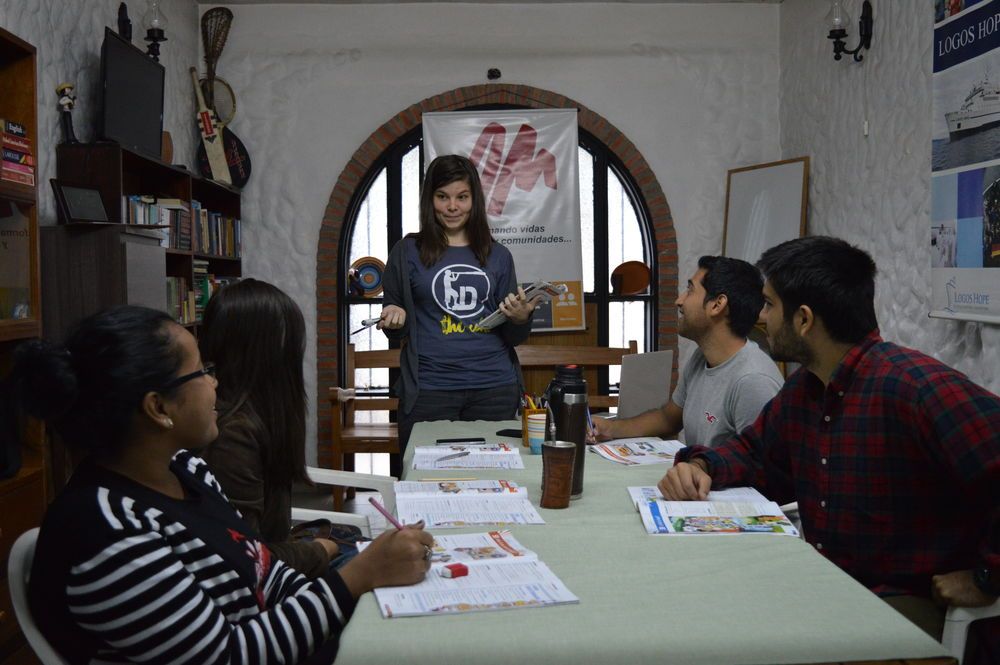 Paraguay:
For the last several years, the OM team in Asunción, Paraguay, has looked for ways to make information about missions available--and accessible--to local believers. Prayer nights encouraged them to intercede for global needs. The Exposure training enlightened young people about potential opportunities to go overseas. Open Door days bridged the gap between the community and OM.

Through these events, “we always saw people who were interested in going to missions, but always there was this barrier of language,” explained volunteer Markos Fehr. “There are other barriers like money or family, but we wanted to get this barrier out of the way.”

To remove the language barrier for potential missionaries, Markos and fellow OMer Kelly Dominguez brainstormed ways to teach English classes at the OM base. They promoted the plan on OM Paraguay’s Facebook page, and when a handful of people responded, they formed a group.

“The first year, it was very informal. We just got together and talked about the [world] flags,” Markos described.

The second year, they ordered books.

Having curriculum quickly added structure to the fledgling class (one student signed up for the second English course). Deborah Krahn, personnel officer for OM Paraguay, also stepped in as another teacher.

Two students attended the next round—three months of three-hour Saturday morning classes. “We have a good book. It’s real-life situations that they can actually apply afterwards,” Markos said. “There was theory to it, and they had to write, but they also were working on their pronunciation and their speaking.”

During one three-hour class, the English team taught three lessons from the book to complete the material by the end of the course. “The time really flies by!” Deborah enthused.

By early 2017, the English programme had expanded from one Saturday class to three, with the team offering one intermediate course and two beginner courses, in the morning and afternoon. Two weeks before the team started teaching, 11 students had already signed up.

Students pay a monthly fee of 100,000 Paraguayan Guarani (about $18 USD) during the three-month course. They also purchase their books for 129,00 Guarani ($23 USD). The price is around one-third of the cost for a normal language class, Markos said. “We want to make it as accessible as possible. We don’t see it as a job or a way of gaining money but as a way of serving people.”

Participants are not limited to OM affiliates, but “the main focus is still missionaries,” Markos said. Many students who signed up in 2017 learned about the English class at a country-wide, multi-organisational missions conference.

In two years, the English classes have developed significantly, but there’s still room for improvement, Markos noted. For example, a bigger teacher base would mean the team could offer classes mid-week as well as on Saturdays, allowing more people to participate.

For individuals wanting to go overseas through OM but who don’t speak English, the class could provide the ideal starting point, Deborah suggested. “We take them and teach them English. They become part of the OM family in Paraguay…and then they go out. That would be really cool!”

Preparing people for missions—through language and other means—is a timely endeavour, Markos affirmed. “I personally feel that there’s an awakening. There are a lot of people interested in missions.”

A few days prior, he had started talking with an acquaintance from church about missions. “He was reading the Bible and said the verse that talked about going out to all nations really touched him,” Markos related. “Now he’s going to come talk to us tonight and see if he can get involved.

“I’ve had a lot of these encounters. I really see God moving towards missions in the hearts of young Paraguayans especially. The culture is a very inclusive culture in a sense that they can adapt well, and they include people... That might help them open doors or accommodate others better when they are in missions.”

Both Markos and Deborah study full-time at a nearby university. Neither expected to be involved in life-long missions.

Markos, whose journey with OM started in Uruguay, joined a discipleship training programme after high school “because I didn’t know what I wanted to study.” When the leadership asked him to stay longer, he agreed, volunteering with construction work, interpretation and “all sorts of things” in the library.

After Uruguay, he returned to Paraguay and discovered his affinity for English. “I’d never formally studied English, I’ve just picked it up from movies and songs, and I realised that I really like it, so I started studying it,” Markos explained. “But at that point, I didn’t have any intention of being a missionary.”

Nonetheless, as he began his studies, he also experienced deep joy in God and in reading the Bible and recognised his responsibility to participate in missions. “Now I see how I can use my title as an English teacher in closed countries,” he noted.

As a future English teacher, Markos said the OM English classes have been good practice: “I feel more relaxed here when teaching, plus we are able to help people who are interested in going to missions.”

Deborah’s foray into missions and English teaching at the OM base was also spontaneous. After high school, “I didn’t want to study yet, but I didn’t know what else to do. So I decided to do a year of service.” Actually, she signed up for two years with the OM Ships Ministry aboard Logos Hope.

“I wanted to serve God in a way and also get to know more cultures and different countries,” she explained. “I didn’t plan that my perspective would open or my interest in missions would stay. I didn’t think it would affect me so much, but it did… My lifestyle will be bringing God’s word to other people.”

After serving with the Ships Ministry, she returned to Paraguay and took on the role of personnel officer with OM for a year before beginning her studies in nursing. Whilst serving at the OM base, Deborah had to translate into English for a visiting ships team.

“I started to teach English here in OM, and I found a passion for the English language. I know I’m going to stay in missions,” she continued. “Sometimes, you don’t know what to do after high school,” she reflected. “You decide to do something for Jesus, and that transforms your whole life.”

Published: Friday, 07 July 2017
Credit: Nicole James
© 2017 OM International This email address is being protected from spambots. You need JavaScript enabled to view it.