A glimpse of heaven 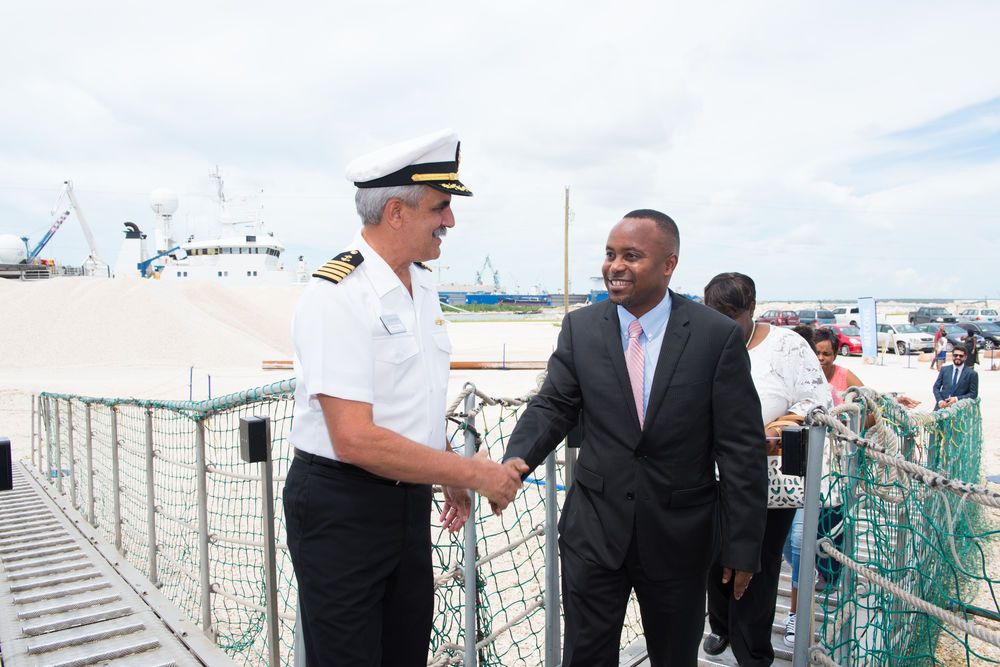 Bahamas: Freeport, The Bahamas :: Captain Pat Tracy (USA) welcomes Senator J. Kwasi Thompson, Minister of State for Grand Bahama.
Bahamians last welcomed the ‘book ship’ to the island of Grand Bahama in 2008, but at that time it was Logos II sailing the high seas. Months later, as Logos II entered retirement, Logos Hope and her crew took up the baton and have been revisiting ports and following up on connections her sister ships made around the world. This visit to Freeport marks the inaugural visit for Logos Hope, and volunteers are excited to make the most of the 11-day stay.

At Logos Hope’s official opening in Freeport, Ian Rolle, President of the Grand Bahama Port Authority, spoke of his meeting with members of the ship’s advance preparation team. “They spent some time sharing with me the mission and vision of the Logos Hope community,” said Mr Rolle. “They represented you very well.” Turning to the other guests he continued, saying, “This crew of amazing individuals are an inspiration to nations worldwide as they exemplify what it means to be our brothers’ keeper.”

“Captain Pat Tracy (USA) indicated that you were blessed because you came to Grand Bahama, but let me say that Grand Bahama is blessed because you came here to us,” said Senator J. Kwasi Thompson, Minister of State for Grand Bahama. “One of the things that came to mind when we saw your crewmembers form a parade displaying their various nations was the thought that when we actually get to heaven we will be able to see all of the nations come together as one. That is what you represent here on the vessel.”

Volunteers look forward to connecting with Bahamians in Freeport through daily onboard events and onshore outreaches to youth, elderly people, and individuals with special needs.

Published: Thursday, 03 August 2017
Credit: Rebecca Gaasrud
© 2017 OM International This email address is being protected from spambots. You need JavaScript enabled to view it.

Nassau, The Bahamas :: A Filipino volunteer joins a team of Chinese-speaking crewmembers to visit local Chinese-owned shops and is surprised to connect with four Filipinos at a supermarket.

Freeport, The Bahamas :: Volunteers use a drama and illustrations to teach children at a police summer camp about God's desire for a personal relationship.