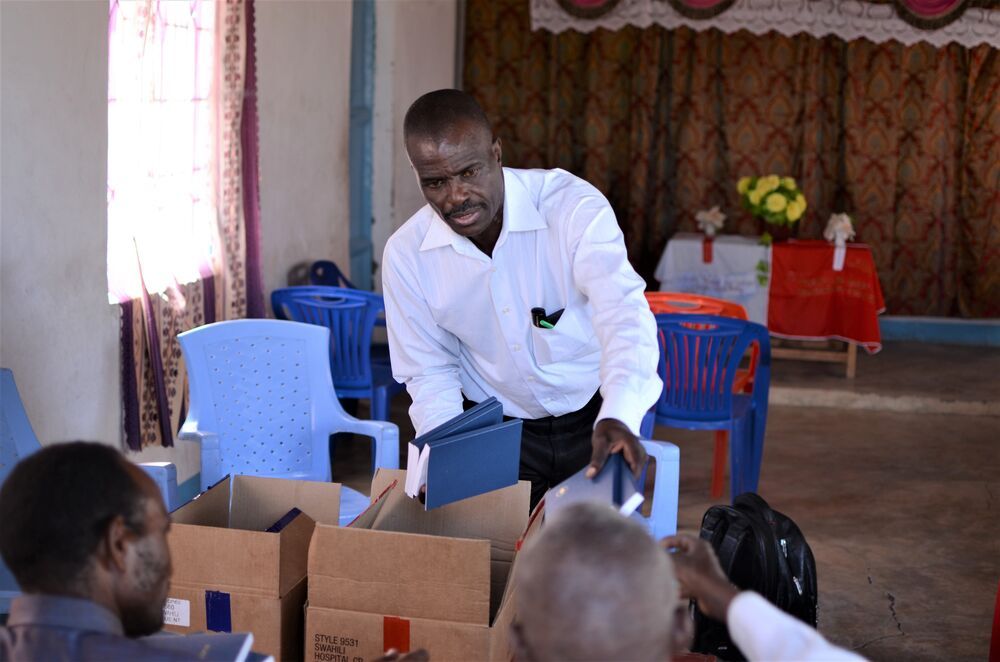 Tanzania: Pastor Tukiko Omosso distributes Bibles to pastors of his church plants in Taturuland, northern Tanzania.
In and around the Serengeti corridor, a vast number of villages sit with no access to the Gospel.

Taturuland spreads across the plains of northern Tanzania. The Taturu people settled in the area—which now bears their name—generations ago, and for just as long they have held fiercely to their traditions of witchcraft and ancestral worship.

Into the land stepped Tukiko Omosso, a pastor and church planter who had completed OM Zambia’s Missions Discipleship Training years earlier and developed a heart for the Taturu people. Upon his return to Tanzania from Zambia, Tukiko and his wife felt the call to reach the unreached—so they set out into the African bush.

Now, driving down a long stretch of gravel road alongside the open plains of the Serengeti, Tukiko recalls God’s blessings.

“When we came out here five years ago to plant a church, there was no road,” he says. “It was difficult even to drive a motorbike out here. But after we started the church, the government came and built this nice road. That’s the way God works sometimes: You go out to a remote place, and God has a purpose to glorify Himself there, so He makes a way.”

Taturuland has given Tukiko and his church the opportunity to plant five new churches—but the journey has not been an easy one. After years of struggle, the churches, while growing, don’t boast large numbers.

The limited growth, Tukiko says, is due to the spiritual darkness that claims Taturuland.

“It’s difficult to bring the Taturu people to Christ because of their traditions,” he says, referencing witchcraft and binding cultural practices. “But we are getting one, one, one.”

‘Getting one’ was the mantra of Tukiko and his wife when they decided to venture out with their church.

“We said, ‘Whatever it costs us, we want to see just one person in Taturuland come to Christ,’” he says. “And we have seen God change more than one.”

Tukiko’s desire is to add more churches; in addition to the five already planted, his own church is training six more men to be church-planters.

“I want my church to be a model of missions,” he says. “Always sending. We can’t sit back in our nice church while people are dying.”

Published: Tuesday, 26 September 2017
Credit: Andrew Fendrich
© 2017 OM International This email address is being protected from spambots. You need JavaScript enabled to view it.