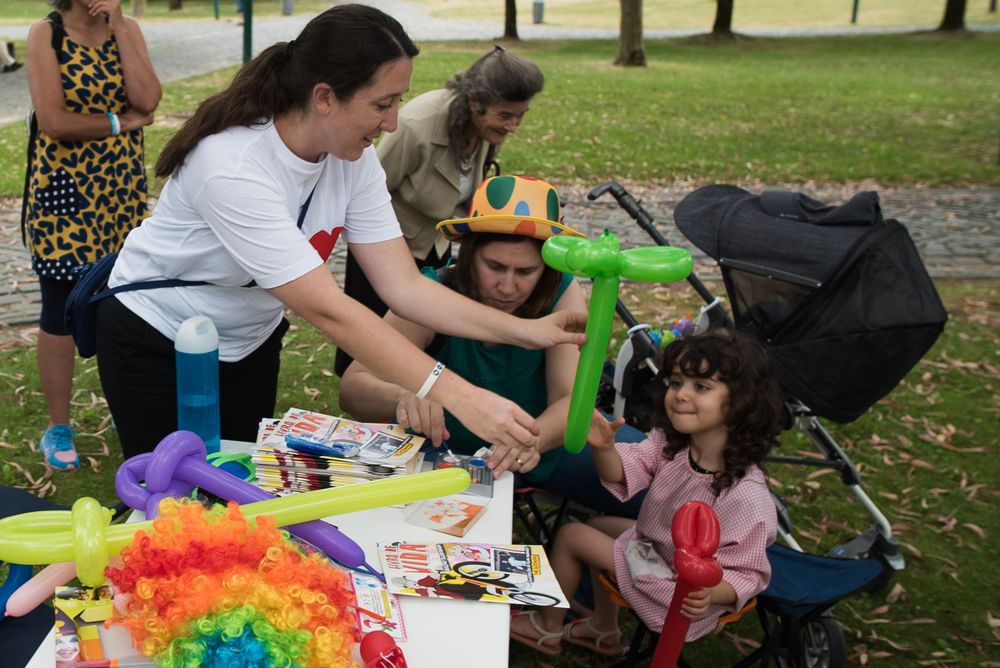 Portugal: The Transform team in Portugal went to a nearby park to host an impromptu fair for neighbourhood children.
Nicole James, a writer for OM International, visited three Transform 2017 outreach teams in Portugal following the July conference in Tarragona, Spain.

The first question I had as my husband and I sped away from the car rental office at the Porto airport was: "Why is Portugal part of Transform?"

According to its website, Transform focuses on 21 modern nations, most of which border the Mediterranean. Portugal, however, is separated from the iconic sea by Spain.

“Because water flows in and out of the Mediterranean, and it does touch the southern cape of Portugal, we always considered [Portugal] part of the Mediterranean nations,” explained Troy (USA), one pastor of Surf Church in Matosinhos, a few days later. “We’ve always looked at the whole Iberian Peninsula as a place we’ve wanted to reach.”

As this year marked the sixth surf team to serve on Porto’s sandy (Atlantic) beach, and two additional teams went on outreach in the country, Transform participants no doubt agreed that Portugal was a truly viable place for ministry.

After a long day of travel on Saturday (extended for some Transform participants by a three-hour flight delay in Barcelona), Sunday marked the first full day of ministry for the surf team, the dance team and the church team.

Despite different focuses, the teams followed similar schedules on day one, and all participated in the service of at least one local church. In an interview at the conference site in Spain, Transform director Mpumi said that Transform sought to esteem local churches (a long-time OM value) by partnering with and supporting congregations in the various countries. For Daniel, one teenager at the Baptist Church Matosinhos, the Transform teams were always a highlight of the year, Portugal field leader Givas (Brazil) shared.

All three teams in Portugal worked closely with the host pastors to engage the cities where they were staying. “Not only do Transform teams bring people willing to go out into the community and share the Gospel, but they also motivate and remind the church itself to be constantly reaching out,” Troy said. “In this case, it’s brought a lot of the members of our church to go out on outreach with them, day after day, plus the leadership of the church, too.”

On Monday, my husband and I headed out around lunchtime, driving two hours south to meet the church team in Fátima, the Catholic centre of Portugal. Pastor Samuel, hosting the team, together with Pastor João took the three Transform participants on a tour of the religious sanctuary visited by millions of Catholic pilgrims each year.

Both pastors wanted the Transform participants to understand the deeply rooted belief system held by the majority of Portuguese people. Although the vast square in front of the Sanctuary of Our Lady of Fátima stood mostly empty, the team watched a handful of people slowly crawl on their knees from one end to the other. A few months earlier, in May, the city had been packed for the 100th anniversary of what Catholics recorded as an apparition of Mary to three children, Pastor João described. OM, along with other organisations and church groups, had held an outreach to correspond with the Catholic celebration.

For Transform participant Stephanie (USA), the outing was particularly personal. As an elementary teacher during the school year, she had spent the last few summers doing missions work. Of Portuguese heritage and with staunchly Catholic grandparents, she gained new understanding of her family’s cultural heritage through her outreach experience.

The next morning, after a prayer meeting at Assembly of God Marinha Grande, Pastor Samuel’s church, the Transform team stuffed their backpacks full of literature: contact information for the church and booklets from the Billy Graham Evangelistic Association titled Radical Love (in Portuguese). Then they headed out. Whenever possible, the team handed booklets to people walking down the sidewalks. On emptier streets, they stuffed the literature into mailboxes.

After an hour and a half, the team’s backpacks were empty, and Pastor Samuel announced he was happy with how much literature had been distributed around the city. That afternoon, the team went to a nearby park to host an impromptu fair for neighbourhood children. Balloons, face paint and a parachute attracted at least 20 kids, who were invited to join in and have some fun. Through the invitation to the children, Pastor Samuel and Pastor João hoped to demonstrate the love of Jesus and build relationships between the church and community.

We stayed in Porto on Tuesday night, then drove an hour north to Fafe on Wednesday. The surf team and dance team were originally supposed to work together that morning: while the dancers would perform in the city marketplace, the surfers would walk around, handing out evangelical literature and invitations to the dance recital later in the week.

Unfortunately, by the time the surf team arrived at Brethren Church in Fafe, wet weather had prevented the performance. Undaunted by the rain, Pastor Miguel’s wife divided the two teams into smaller groups, loaded them up with tracts (the same Radical Love booklets the church team had distributed further south) plus flyers advertising the weekend dance recital. She then sent them out into the streets.

As Manuel (Australia) and Chris (Scotland) walked around in the rain handing out leaflets, they decided to stop into a beautician store, where a mother and daughter were working. They introduced themselves then started talking about what the daughter believed. The daughter, who grew up in the Catholic church, “didn’t think there’s a god, but wasn’t an atheist,” Manuel recalled.

For about 45 minutes, “we just started going through the whole gospel—how it’s not about religion, and it’s not about what other people tell you. You [have to] look into the Word of God yourself and what the Word says about God,” Manuel said.

Before Manuel and Chris left, they asked the girl if she wanted to give her heart to Jesus. “She was on the edge [of saying yes],” Manuel described, “but we didn’t want to pressure her. We wanted her to make a commitment that was truly heartfelt, so we gave her the details of the local church.”

During the entire conversation, the mother, who didn’t speak English, continued working. “It was really good, really encouraging,” Chris stated. “Hopefully some seeds were planted.”

That evening, the rain stopped. Although the surfers had already headed back to Matosinhos, the dance team rallied for their open-air evening performance as planned. Before the programme began, Kaitlin (USA), who studies dance, chatted with us about her passion for the art form and teaching people to engage their imagination. She explained how well the technical side of dance worked together with the ministry side.

Warona (Botswana), part of the Transform troupe, wrote a poem that he recited from memory, while the team performed a dance to an instrumental version of the song 'It is Well.' When team leader Martha (Canada), a dance teacher from Toronto, took the microphone afterwards, she told the people gathered in the town square that the dancers had come to Portugal from three different continents because “we believe in sharing the hope we have in Jesus Christ.”

On our last day in Portugal, my husband and I went back to the beach to hang out with the surf team. The group had scheduled surfing lessons for themselves as well as paid for extra participants so they could invite people on the beach to join them.

“Because the weather wasn’t great for surfing, it was harder to find people,” Troy explained. A few people accepted the invitation, though, including a Canadian guy staying in Porto for a month. He’d been looking for something to do that day, and through surfing together, "we got to share quite a bit more about what we’re doing here, who we serve and why we serve Him,” Troy continued.  “Real seeds have been planted, real relationship [started]… That’s exactly what we’re trying to do with the surf outreaches.”

We left Portugal before the teams finished their outreaches, before all the stories from the week had come together. Undoubtedly, the Transform participants had more encouraging encounters with the people they met in the churches and the communities. The churches, too, benefitted from the additional burst of energy and outreach activities.

This kind of collaboration is foundational to Transform, Mpumi shared: “We believe it is impossible to reach this continent of Europe and the Mediterranean world with the gospel if we’re doing it alone. Would you join us?”

Published: Thursday, 17 August 2017
Credit: Nicole James
© 2017 OM International This email address is being protected from spambots. You need JavaScript enabled to view it.

Seeing the land of Mary turn into the Land of Jesus

Surfing on the beach or providing a dance workshop were new ways to share the gospel in Portugal.

OM Portugal sends a Portuguese pastor and his family to begin outreach in the Catholic town of Fátima.

The Transform Surflink team prayed for a woman suffering from demon possession, and the demon came out.